After Gabi’s attacked in the park, it’s shocking to learn who is behind it.

Days of our Lives recap for Wednesday August 3, 2016:  Aiden agrees to work with Andre, Gabi is mugged, Philip learns Chloe is pregnant, and Deimos gets to Nicole. 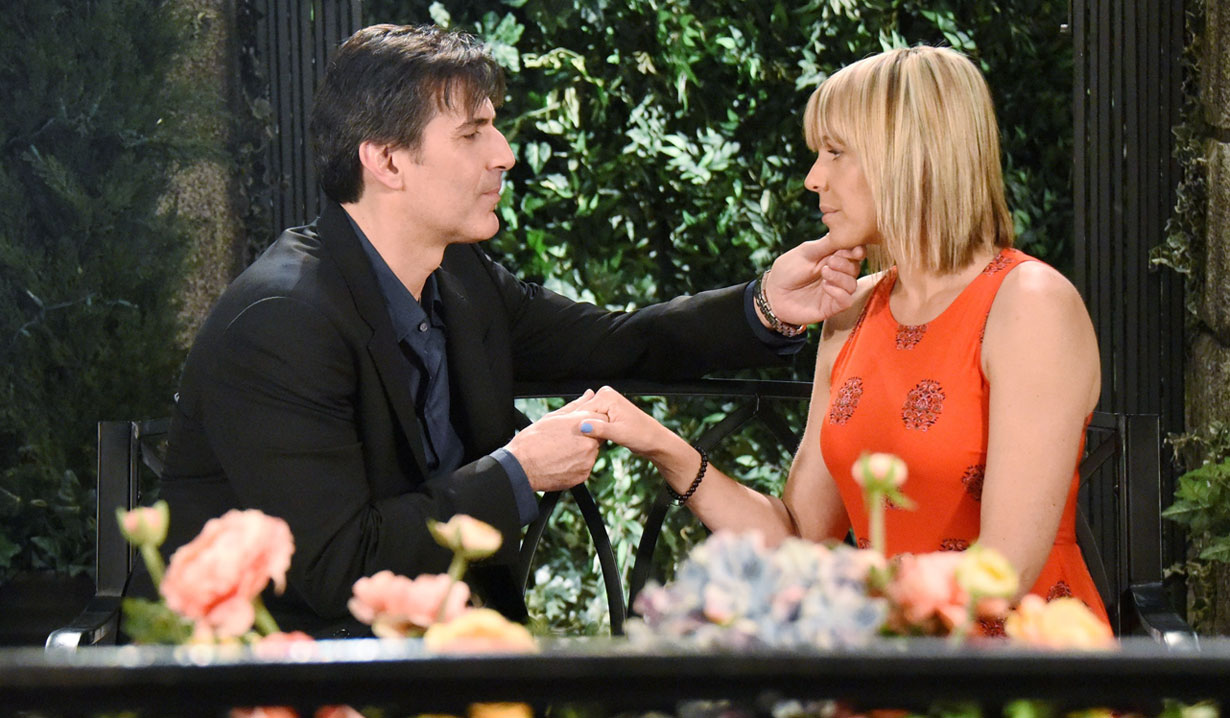 Rafe stops in TBD to check on Dario. Dario tells his brother that he’s finally moving out of the house, but begs him not to let Eduardo move in. He doesn’t think the family will be safe with him there.

Adriana storms into the Salem PD and demands Roman do something about the people who hurt her son. Roman is pleased to finally meet Adriana, who he tells, “You know, Rafe didn’t tell me you were so… you were so.” Adriana quips, “Bitchy?” Roman replies, “Feisty. I was gonna say Feisty.” The two discuss Rafe, and Adriana asks Roman to find him a new partner as she doesn’t like Hope. Roman refuses and defends Hope. Adriana warns him if anything else happens to her son then Roman will answer to her.

Aiden breaks into Andre’s room at the Inn and searches through his desk. He finds the deed of sale to the house that Andre blew up, pockets it, and heads out. Meanwhile, Andre snoops through Aiden’s computer in his room, only to be caught by Aiden. Andre confronts him about his search history involving Justin and suspects he’s after Justin’s job. Andre supports him in this idea, because the job will benefit them both. Aiden refuses to be blackmailed by Andre anymore and flashes the deed to him. Andre laughs as it is a copy, and it only implicates Aiden and not himself. Aiden asks what Andre wants. Andre wants revenge on almost everyone in this town. Aiden agrees to throw in with Andre, as long as he stays away from Hope. Andre says he’ll think about it.

Flash from the past: Where is Susan Flannery from Days of our Lives now?

Chloe meets with Philip at the Brady Pub and tells him that she’s pregnant. He’s stunned when he realizes Deimos is the father. Philip tells her that he will be here for her in any way she needs. Chloe doesn’t know if she can have another baby alone, but Philip thinks she can do anything.

Deimos meets Nicole in Horton Square to apologize for kissing her. Nicole tells him that she wants nothing to do with him and to stay away from her. The two argue as Deimos swears he is in love with her for her, not because of Helena. Nicole tells him they are done, but he refuses to give up. Deimos walks off, and Nicole heads out. Later, Chloe and Philip walk through the square and continue to discuss her dilemma. The two hug, and Deimos returns and spots them from the distance. Chloe leaves, and Deimos questions his nephew as to what is wrong with Chloe. Philip tells him that she is none of his business, and suggests he take his father’s money and leave town. Deimos wants to make amends with Philip, but he will never forgive his uncle.

NEWS: James Read returns to Days of our Lives

A man grabs Gabi in the park and tells her, “This is what happens to the family of a murderer!” Gabi pepper sprays him and runs.

Gabi heads to TBD and finds her brothers and tells them about what just happened to her. JJ arrives, as Gabi called him on the way, and Dario tells Rafe this is exactly what he was afraid of with their father.

JJ and Rafe investigate the park for clues, but find nothing.

Back at TBD, Dario takes care of Gabi. Adriana arrives, as does Eduardo, and Dario lashes out at his father. Rafe and JJ return and break up the argument, and JJ walks Gabi home. Adriana remembers seeing one of Eduardo’s threatening notes, and she cries that he promised her this was over. Eduardo realizes he has to leave in order to figure who is threatening his family. Dario tells his father not to bother coming back. Later after the rest of the family has left, the man who mugged Gabi sits at the bar and demands Dario give him his money. Dario is furious with him for attacking his sister. The guy tells Dario he didn’t tell him his brother was a cop. He warns Dario that if he doesn’t pay him then he’ll go to his brother the cop and tell him everything Dario’s been up to. Dario pays the guy off.

Aiden runs into Rafe in Horton Square and asks if Hope is okay. The lawyer knows he’s lost Hope, but he still loves her and begs Rafe to let him how she is doing. A furious Rafe tells him that if he really cared about Hope then he’d leave town.

JJ tries to calm Gabi down at the Hernandez home, but wonders if there is something she isn’t telling him.

Chloe goes to bed in her room at the Inn and dreams of Deimos confronting her about her secret and telling her that he knows everything.

Nicole walks around the Kiriakis mansion and thinks about kissing Deimos. Deimos returns and asks why she’s here. She damns him as she can’t get him out of her head.

Deimos and Nicole take their relationship to the next level.