Summary for Wednesday June 29, 2016: Nicole gets a shock, Maggie learns who Summer really is, and Victor finds Theresa asleep with her son at the park. 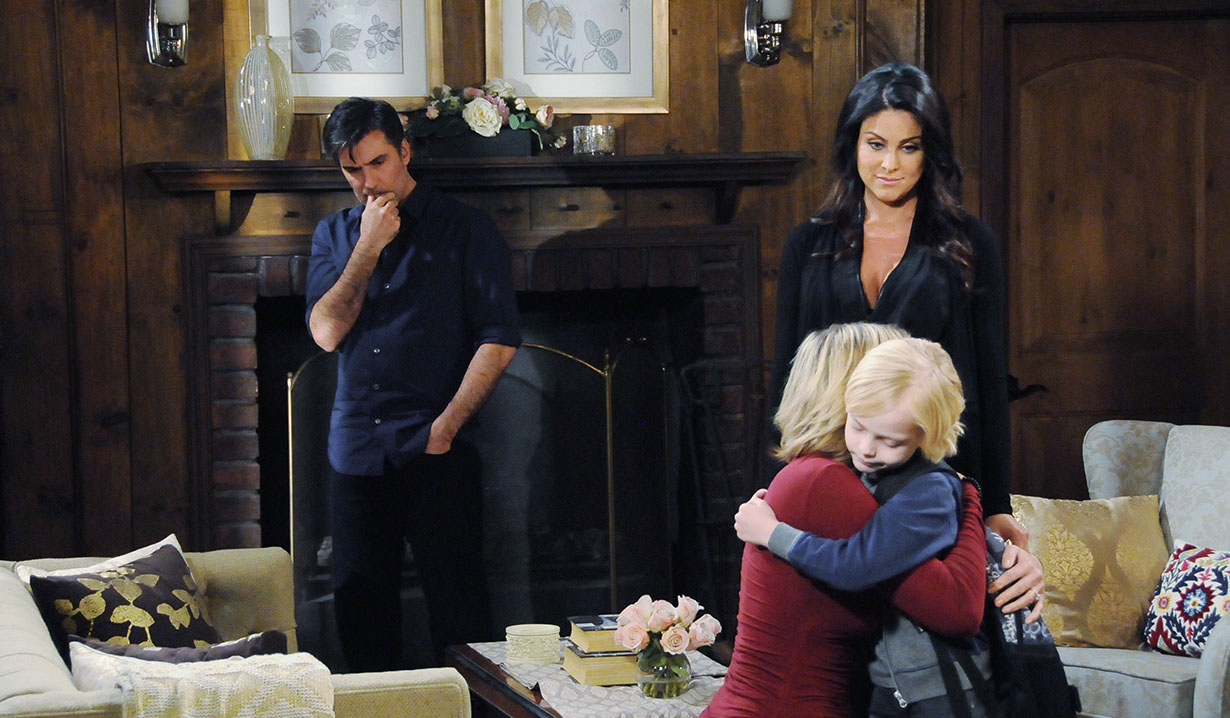 Mr. Brown at Shady Hills promises that Chad’s wife will be found. They argue until Ciara gets between them. JJ calls for an update. Chad has nothing but vows to bring the psych ward down if he doesn’t find her. Later, JJ shows up with Abigail’s mask. She left it at some farm. He assumes she ran away after being humiliated. “She doesn’t want to be found.” Chad refuses to believe it. JJ tells him they’ve video footage that Abby started the fire – she’ll be sent to the state facility when she’s found.

Brady arrives at Maggie’s looking glum. He tells her that Summer’s been conning them both from the beginning. He worries they’re at risk. Maggie tears up. She has a difficult time coming to terms with the news. Summer walks in, there to fess up but she can see Maggie already knows everything. Maggie cries. Summer throws herself at Maggie’s mercy, apologizing. Brady asks what her cut of the 50K was that he gave Clark. She cries and says she took half but lies that she doesn’t know where Clark went. She claims to love them both and leaves in tears.

From the townhouse, tired and cranky, Theresa yells at Anne over the phone about work and bitches that she slept 6 hours in the last week. Nanny Emma comes in Theresa wants to take Tate to the park, though Emma’s concerned she’s too tired.

Kate finds Andre has made them both a proper English breakfast at the mansion. At her insistence, he starts talking. He needs her help with something and in return, she’ll have his loyalty and support.

Nicole arrives at Chloe’s. Nic says they can’t let anyone know she left Salem limits. Deimos walks out and Nicole staggers in shock. Shock turns to anger. Why hasn’t he told her he’s alive? Deimos will explain everything. They get into it and Parker interrupts, back from his friend’s place. His whole face lights up as he sees Nicole and he rushes into her arms. Parker wants to go back to his friend’s so Chloe takes him outside while Nic demands Deimos return to Salem to clear her name. He says he will on one condition. She thinks he wants sex but he wants her to be with him and to know how she really feels about him. He knows her feelings for him changed the night of the storm. He says he just wants someone he loves to come home to and a family. Nicole cries. She has done a lot of nasty things to get that very same thing. He tears up. He knows the real her and likes her the way she is. She tells him he’s wrong about who she is. She likes herself. In him she saw a glimpse of the man he used to be. She doesn’t think he’s that same man. He claims he is changed after almost dying. Chloe returns and eavesdrops. Deimos says he’ll return to Salem with Nic.

At the park, as Tate sleeps, Theresa nods off. Victor appears and snaps, “Is This your idea of being a devoted mother?” Theresa defends herself and deflects. They go back and forth with threats and Vic walks away.

Chad arrives home on a call with somebody, telling them to search for Abigail and keep it from the police. He takes a call later, and hears Abigail was spotted on the DiMera property. JJ arrives and Chad tells him the news. They go through the tunnels but find nobody.

Victor arrives home to see Maggie sobbing in Brady’s arms. They fill him in and he says, ‘I told ya so’. He thinks they’d be better off if he had left Summer in the Pacific and thrown Theresa in there with her. Maggie shouts, “That’s enough!” Brady goes and Maggie says she needs her sponsor. Victor explains his over-protectiveness by saying he loves her so much but Maggie says he’s the one hurting her the most.

Clark’s sister Janet finds Summer in the park and demands answers about her brother. Janet won’t leave town until she learns the truth. Summer denies knowing anything.

Back at the townhouse, Theresa flashes to Victor promising that Brady will see her for who she is someday. Brady appears and surprised Victor didn’t tell him, she reveals that she and Victor had it out.

Summer arrives home and finds a satchel with a lot of money inside and a note.

Chad can’t believe what Abigail left in their house.

Philip’s surprised to see a friendly face from the past.