Summary for Monday June 13, 2016: Joey and Jade are taken hostage, Rory reveals something shocking to JJ, and Joey's shot. 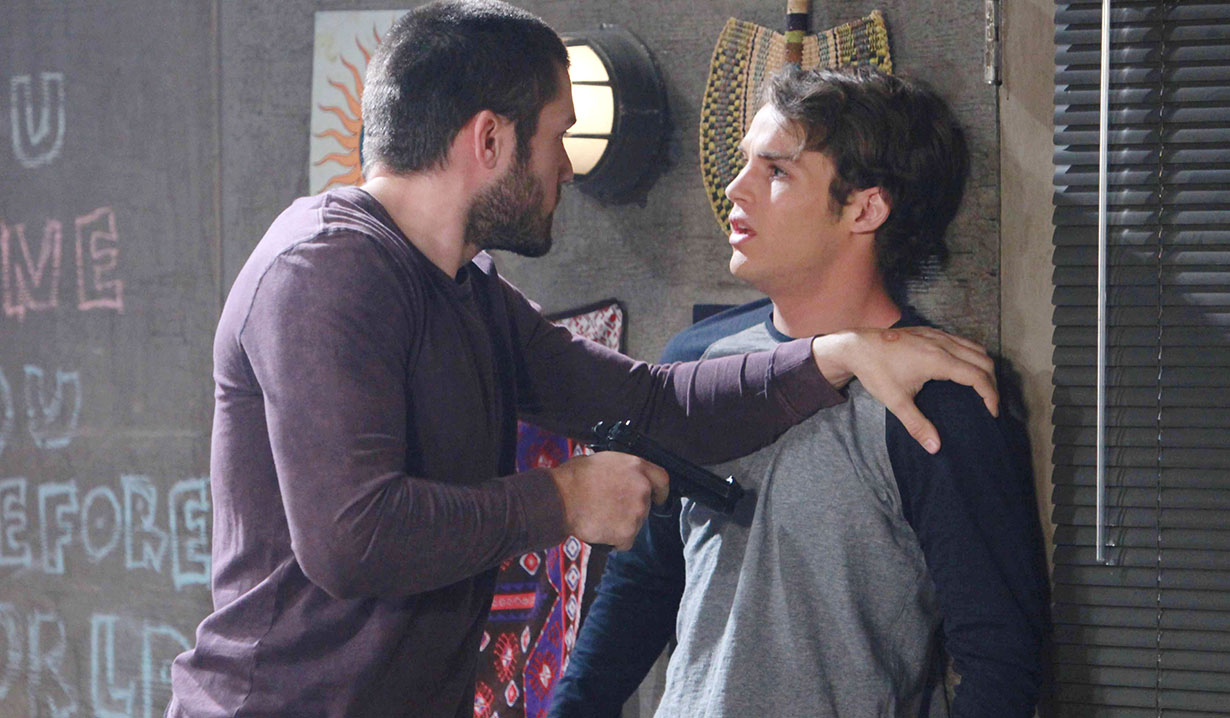 In the hotel room, Joey’s remorseful about his shenanigans which led his parents to California. Kayla’s simply anxious to get back to Salem. Steve suggests going on a road trip before heading home to “put the Griswolds to shame.” He’s the only one into it. Meanwhile, Jade texts Joey on the sly, at the commune begging for help. Back at the hotel, Kayla packs and Joey receives Jade’s text. He’s immediately on edge, knowing the people she’s with are shady and that Jade has nobody to help her. He talks his parents into going to the commune. Once there, they notice the place is locked up. Steve tries to find another way in and Dirk tells them to get lost. When they don’t, he grabs Joey, drags him inside and locks the door on Kayla. Inside, Dirk has taken the whole commune hostage. Steve returns to Kayla and they try again to find another way in. Inside, Joey tries to play the hero. His dad’s outside and he says there are more cops on the way. Dirk says he called them already and if he doesn’t get what he wants, everyone’s going to die. One kid is dead, and a police officer lies bloodied on the floor. Dirk grabs Joey and goes to the door. He tells “old one-eye” that he has a gun to his son’s back and he’s already murdered one guy, and shot an officer. Steve and Kayla break down, emotionally. They call the police but they’re stuck on a pile up on the highway. Steve breaks into the commune and is immediately caught. Steve asks him to let the hostages go and to use him as collateral. The cops finally arrive and call Dirk, trying to make a deal. It’s a no go so Steve tries to talk Dirk down by telling Dirk that if a shot is fired inside, the cops will kill him. He talks about his past and tries to identify with Dirk. Outside, the cop is pissed that Steve went inside without them. Kayla says that Steve’s got a background in the ISA. Suddenly, the cop staggers out, and a few more of the hostages. Kayla rips Simone a new one for teaching the kids how to be immoral. Inside, Steve gives Dirk a pat on the back. Joey charges Dirk and there’s a struggle. Joey’s shot. A cop rushes in and helps Steve cuff Dirk while Joey screams and sobs, “I don’t wanna die.” He blames himself for all of this as Kayla runs in. Everyone rallies around him while Kayla screams for an ambulance.

Opinion: Soapbox: Powerful dialogue, romantic entanglements and a touch of the bizarre

Julie directs JJ who is helping her move a few items from the Martin House into Jenn’s. Jenn notices JJ’s bruising on his chin and JJ fills her in on Rory hitting him and that he feels he’s been a terrible friend. They discuss Jenn going to her AA meetings.

JJ meets Rory in the park. Rory looks around, apprehensively. He snaps that he’s a dead man because of JJ. JJ’s upset. That wasn’t what was supposed to happen. Rory doesn’t want his help and doesn’t think there’s anything that he can do. He leaves in a snit.

Back at Jenn’s, she flashes back to ransacking her house. Julie brings her tea to calm her but Jenn says it won’t help. Her son was hit by a drug dealer, and her daughter’s in the psych ward. How did this happen to her? She recalls her life before all of this and wonders how the heck Alice and Tom did it with all their kids. Julie laughs. She assumes they relied on family.

Nicole goes to Rafe with her case.

Philip tries a reconciliation with his father.