Days Recap: Deimos has nightmares of Helena, as Nicole agrees to work with Victor

Summary for Wednesday April 27, 2016: Summer grows closer with Maggie, Mark causes trouble at the prom, and Hope puts the brakes on with Rafe. 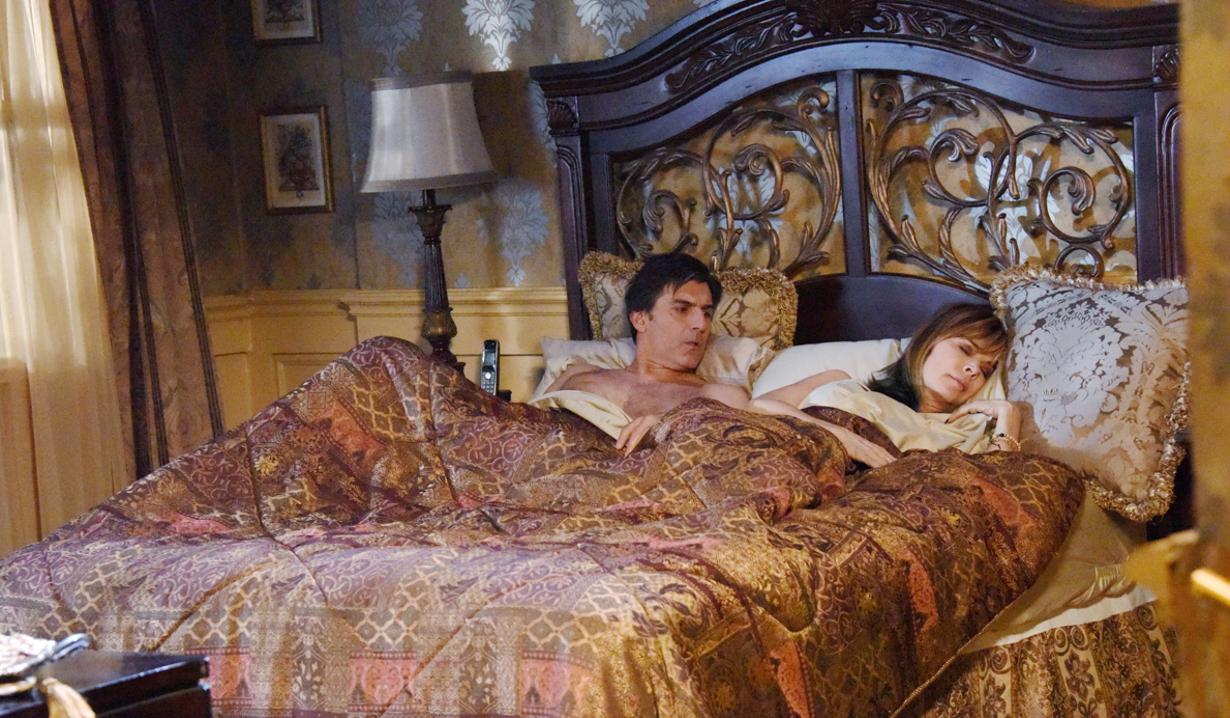 In bed at Jade’s place after sex, Joey is surprised to hear that she wants to crash the prom.

At the Edge, the prom is in full swing. Claire thanks Henry for coming with her. He assures her she’s got this. On the dance floor, Theo tells Ciara he’d do anything for her. Nearby, Mark watches and takes a swig from a flask. When the song ends, Claire asks Ciara if she could be more than friends with Theo. Meanwhile, Henry tells Theo he and Ciara were looking good out there. Mark approaches Theo and asks if tonight is everything he’s hoping for. Theo doesn’t want any trouble. Mark backs off. Jade and Joey arrive, and Ciara tells Claire she’ll be awesome, before she starts to sing “When time was on our side.” Theo joins Ciara and takes her hand. Joey and Jade join them. Joey notices they’re holding hands. Claire takes the stage to perform. Joey and Jade nuzzle, Ciara cuddles with Theo, and Henry takes photos as she sings. Claire finishes to enthusiastic applause. She and Henry hit the dance floor, Mark calls Ciara a bitch under his breath, and Joey and Jade do something to the DJ’s laptop when he’s not looking. Punk rock music starts playing. Mark calls someone and says, “When I give the signal, you’re on.” Theo and Ciara are crowned King and Queen of the prom. Mark is on the phone saying that he rigged the ballots. He gives the order, “Now.” The video feed shows upsetting images of Theo, and then Ciara and Chase. Ciara spots Mark and yells that it’s time to teach him a lesson.

At the hospital, Summer visits Maggie and learns how to stimulate her leg muscles. She tells Maggie she enjoys taking care of her. Maggie tears up and says if she had the use of her legs when she gave birth, things might have been different. Summer doesn’t hate her. They will find their way one step at a time. They bond over the little shoe charm – Maggie thinks it’s a sign she’ll dance again. Summer thinks the reason she’s there is to see that. In Victor’s room, Nicole informs him she’s decided to help take Deimos down after visiting him. She will pretend to be Helena’s ghost. Victor jokes about them ‘jumping back into bed again’. Nicole refers to Victor as ‘Grandpa’ and wants to talk terms. She negotiates for 30% of Victor’s net worth. Victor describes Helena, whom he truly loved, to Nicole, so she can impersonate her mannerisms, and talks about how she fell for Deimos when he was busy making money. Justin arrives and wants to know what’s going on. Victor takes the book he had Justin bring. Nicole muses that Justin won’t like their plan. Justin groans as he realizes it’s about Deimos. He gets up to speed, and worries that Deimos will see right through Nicole. Justin bickers with Victor about how risky the plan is, but Victor wants assurance that he and Brady will stay out of it. Justin grudgingly agrees.

Where are they now? Rachel Melvin (ex-Chelsea) in The Rake, thriller

At the Kiriakis mansion, Kate notes that she no longer owns Basic Black. Deimos calls her the co-CEO of Titan and they kiss. After they have sex, Deimos enthuses about getting everything he wanted. Kate pours drinks and they resume celebrating in bed. Later, Deimos has a nightmare about Helena envious he’s with Kate and telling him it’s over, and then one about Kate turning into Helena. Kate awakens and Deimos kisses her determinedly.

At Hope’s place, she and Rafe make out on the sofa. She leads him upstairs to her bed. They resume making out, but then Hope decides she can’t go further. It’s too much in that house, in that bed. Rafe understands, and agrees it’s a little weird. “It should be our room; our place.”

At the Brady Pub, Hope, sitting with Rafe, takes a call from Ciara, who tells her she’s been arrested.

At the station, Hope and Rafe learn that Ciara, Theo, and the others are being accused of spray-painting Mark’s father’s car with an obscenity. Mark’s father, Judge McNair strolls in, and confronts Hope. Theo steps forward to place the blame on Mark.

In her room, Nicole studies the picture of Helena and changes into an outfit to look like Helena as she prepares herself for what’s ahead.