Summary for Thursday March 17, 2016: Abigail worries that Ben's still out there, Shawn goes on a date with Lani, Claire mopes about her parents' split, and Summer tells Maggie, "It's a girl!" 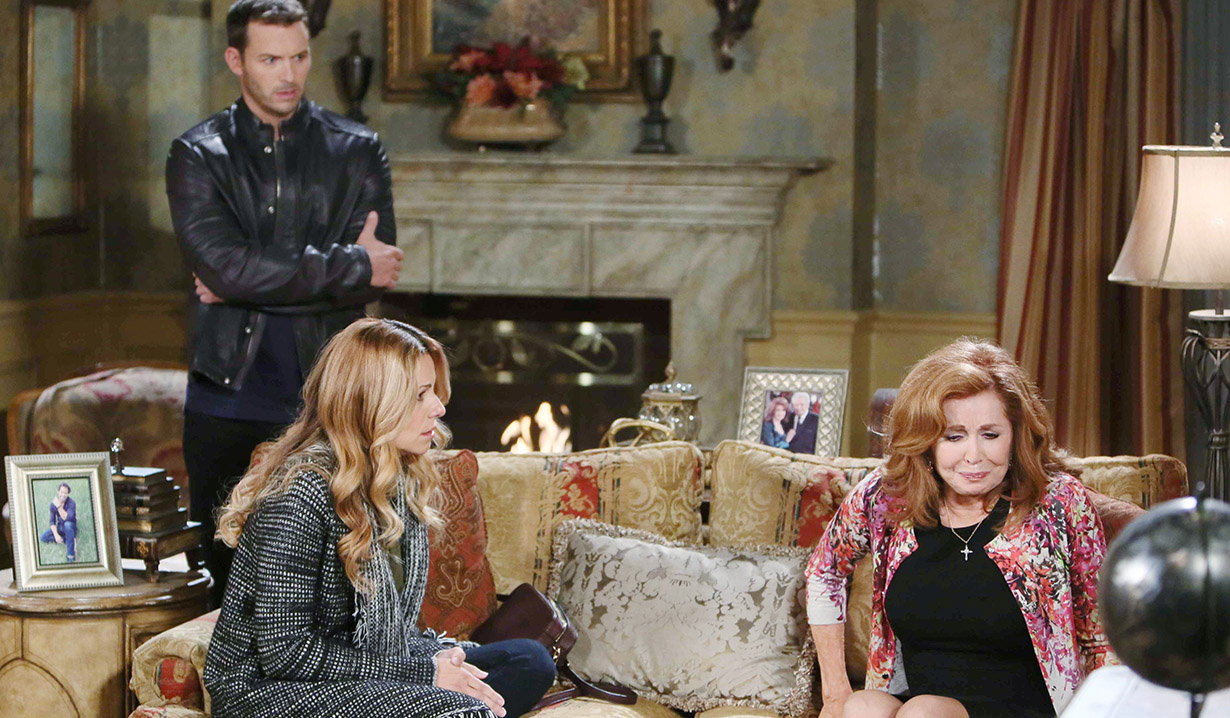 After sex at the townhouse, Theresa wakes up on the sofa with Brady and mentions having an amazing dream. Brady says it was no dream and she glances at her hand and gasps. She got everything she always wanted.

At SPD, Lani and Shawn wish Eduardo could have led them to John. Lani asks him out and they take off.

Claire plays the organ and sings at The Edge while Belle watches and claps. Claire admits she wrote the song for Ciara’s party. She thanks her mom for letting them hold it there. She gets maudlin about her parents’ break-up. Belle comes clean that she and Philip are a thing now. Claire knows. She saw them kissing, earlier. All she wanted to do was disappear. Belle explains that Philip makes her happy. Claire agrees to get over herself and stop being a brat. She’s not a kid anymore and can’t keep making this about her. Belle never thought she was being a brat. Belle takes most of the blame for her marital breakdown and hopes for the best for Shawn. She tells her kid that PhillyK makes her happy. Once she’s gone, Claire sits alone crying. She fantasizes her parents are together watching her sing.

Deimos arrives at the Kiriakis mansion and tells Maggie he wants to end the war with his brother but needs her help. He shows her the scar Victor gave him. Victor already stabbed him in the heart when he put him behind bars for a crime he didn’t commit. He asks how to prove that he wants to put this all behind him. Maggie’s skeptical. Deimos asks her for water and when she’s gone he adds his prescription to her pill bottle that he finds in her purse. She returns with a bottle of water and wants him to drink it in the car. He thanks her and goes. Maggie takes one of her pills.

Chad and Abby arrive at the hotel in Chicago with the baby. They put him to bed in an adjoining room and Chad promises to take her on an exotic trip soon. Abby brings up ruining her wedding by thinking she saw Ben. Chad calls the wedding a dream because at the end, he was married to her, the most beautiful bride. They make love and fall asleep. Abby dreams Ben’s naked in bed next to her and wakes up in a panic. Chad reassures her. She breaks down, worried that her mom’s addicted to pain pills and that Ben’s lurking in the shadows. Chad reassures her again and goes to shower. She gets a call and when nobody speaks she asks, “Ben is that you?” Later, she snuggles the baby and Chad notes she is feeling better. She goes to shower and Chad tells Thomas about a good witch who is known for her pumpernickel bagels. The baby doesn’t respond and Chad says he’ll try harder with his next story. Later they go out to dine and when they return, Abigail gets out her negligee only to find it ripped to shreds. She cries in Chad’s arms.

Brady gets take out from the pub and spots Summer. He asks her to be honest with Maggie about who she is. It’s not like she’s asking for a handout. Summer cringes inwardly but agrees to do it – now.

Outside at Mandalay, Shawn and Lani drink and Lani confesses she was afraid during the shootout. She’s shocked Rafe’s dad was an assassin. Shawn says his dad liked to put himself in dangerous situations like Eduardo only he was a cop. Shawn invites her for dinner so they head to the pub for some of Caroline’s chowder. Once they’re gone, Belle runs into Philip who asks her out.

Brady and Summer wander in unannounced. Summer’s there to tell Maggie the truth. She recounts the whole story about her adoption and that the testing Daniel did proves she’s Maggie’s daughter. Maggie tears up and her lower lip quivers. She thinks it’s a mistake and runs off crying. Summer bawls. Brady says she’s just in shock. They have to give her time. They go and Maggie cries alone.

Shawn and Lani eat at the pub. Shawn drinks directly from the bowl, knowing his grandmother would kill him if she saw. When he gets a chowder mustache, Lani kisses it off him. Meanwhile, Belle and Philip bustle in and get an eyeful. Belle and Philip leave and Shawn tells Lani she made his day. Outside, Belle assures Philip she’s fine. They kiss.

Brady returns home and Theresa asked how it went with Summer and Maggie. He worries he did the wrong thing but didn’t think he had a choice.

At her hotel room, Summer sobs. She calls it stupid of her to have come and starts packing.

Ciara throws herself a party.

Days Recap: Yo Ling wants to...