Summary for Friday February 26, 2016: Steve lies for his son, Hope makes a confession to Roman, and Chad learns of Stefano's death. 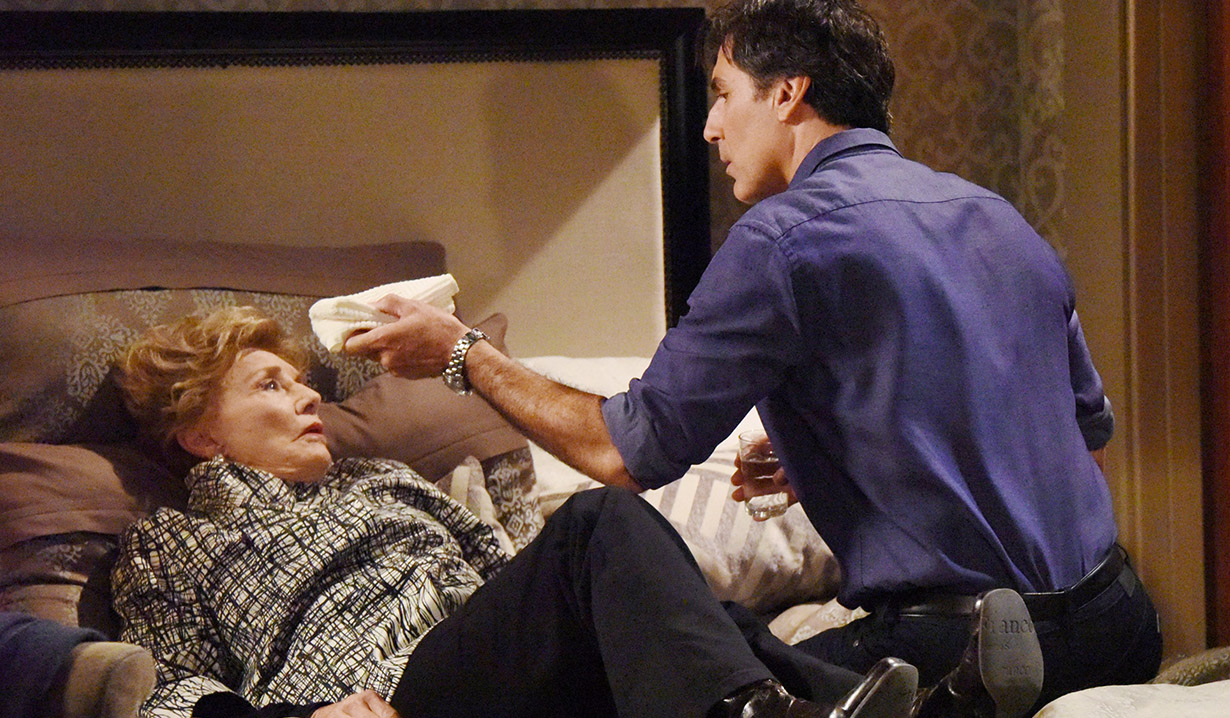 At the mansion, Victor’s angered to find out from Maggie that Caroline moved back home. Maggie asks him to go to bed with her but he’s too wound up and has work to do. She kisses him and they profess their love for each other. She goes to bed and Justin finds him working. He suggests bringing Sonny home to work the Salem office. Victor’s interested. They discuss Stefano’s death and Victor calls him a worthy adversary. “Good riddance,” he says, thinking he was the one to torture Bo.

At the DiMera mansion, Chad’s visited by Rafe who tells him they’ve found Stefano’s body and arrested Andre. Rafe goes into detail about finding him in the rubble of that building which was demolished. Chad’s in shock and toys with Stefano’s chess set. He wants to see his brother.

Roman arrives at Alice’s to see Hope. He tells her about Andre being taken into custody even though he’s innocent. He’s known since Rafe brought him the case. He loved his brother and loves her, and asks her what happened the night she went to see Stefano. Hope comes clean. “You’re right. I did it. I killed Stefano.” She admits she blocked his final moments out and cries about shooting him. Roman blames himself for not being there for her. Hope tells the story and accidentally admits it involves Rafe. Roman’s face falls but says he has no problem letting Andre go to jail for all the crimes he committed and was never punished for. Hope cries in relief.

At the hospital, Joey smothers Ava to death. Steve walks in and finds his son in shock. He feels Ava for a pulse. There’s none. Joey sobs and Steve tells him to go home. Something drops from his pocket on his way out. A nurse walks in and Steve confesses to murder. He texts Roman to go to the hospital ASAP.

From the park, Caroline calls someone to let them know she’s taking a nice long walk and heading home. She drops her cell after disconnecting and Deimos picks it up. She recognizes him but he claims not to know her. She knows very well he’s lying. He calls her feisty. No wonder Victor was so infatuated with her all those years.  She tells him to stay away from Victor and her and then takes her phone. She’s shocked when her hand touches his and she has a vision that he is shaking hands with Dr. Seth Malcolm. She passes out into his arms.

Caroline wakes up at Deimos’ hotel room. He tells her he wanted to make sure she’s okay. She asks why he didn’t take her to the hospital but he says she only fainted. She asks how he knows Seth Malcolm, “the monster who tortured my son.” Deimos claims he doesn’t and assumes this is a vision. He’s fascinated. She just wants to leave. She stumbles on her way out and he texts Seth Malcolm.

Chad arrives at SPD and Rafe brings in Andre. Andre fingers Hope for murdering their father and says she and Hernandez framed him. He asks for his brother’s help but Chad won’t lift a finger to help. He screams, asking why. Andre repeats he didn’t do it. Chad yells about Stefano having a tender place in his heart for them all, whereas Andre has no heart. “You are nothing but pure evil.” As he goes, Andre threatens that he’ll regret this.

Kay and Joe arrive at the hospital. Steve privately tells Joe to keep quiet. Roman shows up and Steve claims he killed Ava. He asks Kay to call Belle to tell her he’s about to be arrested. Joey yells, “No, you can’t do this!” Steve tells him there’s no going back and to go home. He tells Roman to arrest him.

Caroline returns to the Kiriakis mansion and says Deimos knew Malcolm. She thinks he had something to do with Bo. Victor calls Hope with the news. When they disconnect, some man calls, whispering, “You killed the wrong man.” Hope gasps.

Chad returns home and tells Abby he’s conflicted about his feelings for his father’s death. He thought that someday Stefano would change; that they could work things out. He never got to meet his grandson. Abby’s sure he’d have loved him. Chad feels foolish to grieve him but Abby knows Stefano loved him. They snuggle and then he says he’s sad his dad’s gone but he’s done wallowing, knowing Stefano wouldn’t want that. He wants to marry her in Salem. She’s happy.

Hope meets Rafe in the park and confides that Roman’s not going to do anything about the murder or cover-up. She worries though that she killed the wrong man.

Gabi and JJ have sex.