Days Recap: Nicole and Maggie say a final goodbye to Daniel as Eric and Brady’s fate is decided 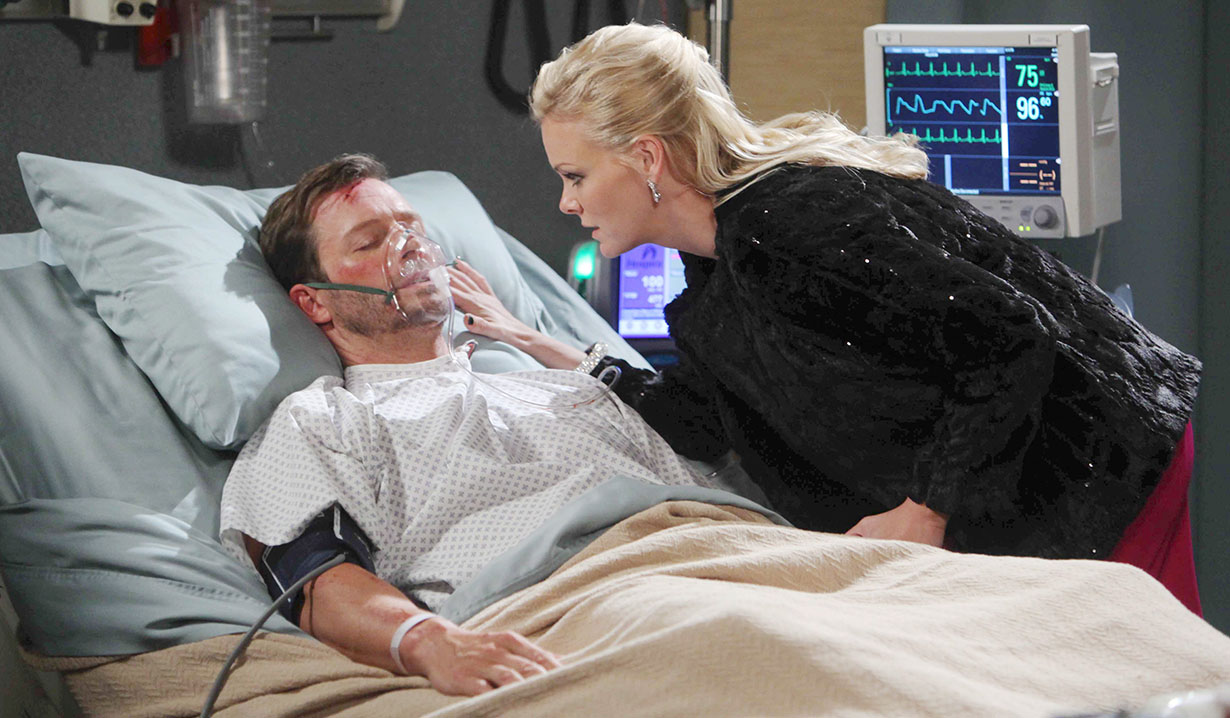 In the hospital, Chad holds Thomas. Abigail knows Andre and Stefano did something to change him but she believes he can come back from it. Chad flashes to his brainwashing and Abigail’s love and starts to weep. “What have I done? How could I treat you like that?” Abigail smiles and wipes away his tears as he tells her he’s scared. He’s amazed that she didn’t give up on him. They profess their love for each other and kiss. In Daniel’s room, Nicole cries and tells him he’s about to save the life of one of his friends. In Brady’s room, Roman talks to Eric, telling him to hang in there. “I love you, so much, you hang in there. Don’t leave me,” he says. Meanwhile, Theresa is in Brady’s room telling him that they’ll come through for him. In the waiting room, Marlena finds John asking Kayla and Fynn if he can donate his own heart to Brady. She and Kayla tell him to get that idea out of his head. Maggie finds this situation impossible and asks Kayla who has the best chance of surviving a transplant. Kayla tells her it’s clear Brady needs the heart. He could go into cardiac arrest at any time, while with Eric, they have time. Upset, Marlena walks to Eric’s room. John follows. Marlena wonders how they’ll get through losing one son over another. He asks her not to give up hope, reminding her Eric’s a fighter. Maggie goes to Nicole and tells her Brady will get Daniel’s heart. They both start to cry. It’s time to say goodbye. Nicole bawls. She can’t! Nicole thanks Daniel for loving her, for the memories. “I will always love you,” she sobs. She kisses him. Maggie kisses him and wishes him a safe trip home. By the hub, the doctor clears Thomas to go home. Abby and Chad are relieved and hug. Abby goes to check on her mom. Chad decides to stay with their son. Back in Daniel’s room, his body has been taken away and Nicole looks through his personal effects. She looks to the ceiling and asks if this is fun for Him, making her lose her babies and now Daniel. In the OR, Fynn tells Daniel’s body he’ll make sure he does this right. “Like you would.” The heart transplant begins. Back at the hub, Abigail finds Jennifer and is told about the accident. When she hears Daniel didn’t make it, she cries in disbelief. Jenn tells her Brady will get Daniel’s heart. Philip and Belle arrive and everyone paces, waiting for news on Brady. Two hours pass. Theresa’s antsy. Kayla swans in. The operation went beautifully and Brady’s breathing on his own. Maggie goes off to call Melanie and John calls Paul. Marlena goes to Eric again and as she talks, his monitor goes off. She calls for help. The nurse arrives. He had an arrhythmia caused by the infection in his heart. She injects him with something that should help and goes. Maggie returns to the waiting room and tells him that Melanie’s okay. They agreed they were lucky to have him as long as they did. Paul arrives looking for word on Brady. Kayla returns and tells them so far, so good. Later, Abby tells Jenn that Thomas is fine. Dr. Oak said he has a minor blood disorder and that she and Chad reunited. She feels guilty being happy and cries over Daniel. Meanwhile, Chad hangs out with Thomas, telling him they’ve good times ahead. He goes. A doctor lets Nic see Daniel’s body one last time. Fynn saunters in and holds her as she cries. She rushes out. Belle goes to Eric’s side with Philip while Marlena goes to the chapel to converse with God with John trailing after. Theresa sits at Brady’s side and he reaches out to hold her hand, making her tear up.

Hope’s on the sofa at her house, dreaming about Ciara’s kidnapping. She wakes up with a start.

Rafe and Gabi walk through the square. She’s happy to be getting her life back and says Lucas is babysitting Ari. Hope texts asking him to come over so he takes off.

Rafe moseys into Hope’s. She thinks Malcolm called Stefano before he got shot. He understands but they need proof. Hope says Stefano’s going to pay for good this time. “He’s going down.” Rafe asks her not to do anything rash and let him do his job.

Chad arrives at the mansion and demands Harold get Stefano.

Bell confides in someone unexpected.

Find news about all Days actors, check out DOOL spoilers and then read about who is leaving Days of our Lives.