Summary for Monday November 23 2015: Abigail feels helpless, John offers Andre a trade, and Kayla has to tell her mother, brother and nephew that Bo's dead. 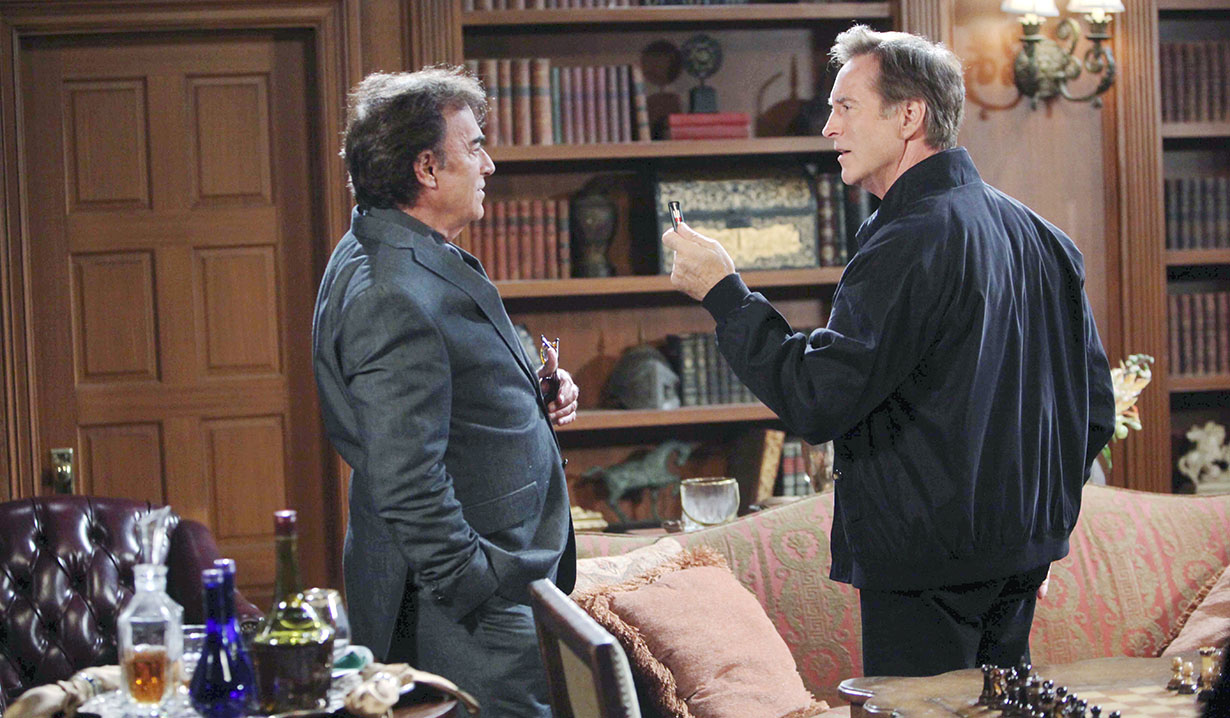 In the park, Bo dies in Hope’s arms. She sobs and begs God not to take him from her. It begins to snow and she lies him down on the ground with her jacket under his head. She kisses him and yanks the tree out of where they planted it and cries. Later, she calls Kayla.

Chad paces the Horton square as he recalls Ben beating him up in his apartment though he can’t figure out why they fought.

In the cabin, Wendy begs Ben to take Abigail to the hospital. She needs a pediatrician. Abigail says the baby’s coming way too soon. Ben yells that the baby will be born there. Wendy asks for help preparing for the birth as Abigail steals Ben’s cell phone and starts texting Chad. She doesn’t get a chance to send it when a massive labor pain hits her. Ben sees the phone, grabs it and crushes it under his shoe. Abigail sobs, helplessly. Ben starts yelling and Abigail has another contraction. Later, they’ve settled Abigail on the floor and the midwife tells her she’s eight centimeters dilated. Abigail screams that she wants her mom.

Andre’s shocked when John arrives at the DiMera mansion unannounced. John shows him the flash drive and wants to make a deal. “I don’t make deal with losers,” Andre says. John knows what’s in the bank is the only reason Andre resurrected himself. John says the flash drive in his hand is fake but if he brings the real deal, he wants Sami. Andre agrees to it. John goes and Stefano wheels himself into the room. “So. I hear you’re going into business with John Black.” Andre says he only kept this from him because he was concerned for his father’s health. Andre promises by the end of the day, all his father’s problems will be resolved. Later, Stefano has left the room. John returns with Marlena and they demand Samantha. Andre leads them to the dungeon he held Sami in but she’s gone. He appears confused. Back in his room, Stefano is on the computer and yells, “Samantha, you bitch!”

At home, Ciara tells Chase to stop lighting matches and throwing them at the blood stain on the carpet. He’s trying to make the stain go away and tells her that when his mother was drunk, she was afraid of his dad. He never believed her. He confesses he misses his father, which confuses him. Ciara asks what’s wrong with that. Chase thought they’d be one big happy family but that’s over. He recalls his mother’s death, vaguely, and read the stories. He knows his father was thought to be responsible but was cleared. He wonders if Aiden really did it. Ciara gets antsy and they take off outside.

Nurse Jackie interrupts Kayla and Steve with a letter addressed to Steve at the hospital that reads, “Just when you think maybe you figured it out.” She gets a call from Hope who is sobbing and asks where she is.

At the pub, both Roman and Shawn D try to get Caroline to relax but she likes to keep busy. She busses tables, worried about Bo. They discuss Shawn staying in Salem permanently. It’s awkward but he admits he and Belle have talked about it. Caroline flashes to Hope crying over Bo’s body and looks pale.

Back in the park, Hope replants the oak tree and lies over Bo’s body. Kayla and Steve rush to them and Kayla whispers, “No, no, no, no.” They gather around him and they comfort Hope. The ambulance is on the way, they say, but she won’t leave Bo. Steve and Kayla tell Hope how long they’ve known. She wonders why he didn’t tell her sooner.  She cries that this is her punishment for giving up on him. “I’m sorry,” she says, weeping. Steve tries to pull her away from Bo but she screams. Steve takes her place, lying beside his friend, crying. He hopes his ‘bro’ is at peace and covers Bo’s face with his jacket. The paramedics take Bo away with Hope and Steve and Kayla finish planting the oak tree.

Steve and Kayla arrive at the pub. Kayla watches her mother with Shawn and Roman and tells Steve she wants to do this alone. There’s someone else who needs to know so he says he’ll take care of it. He goes and Caroline spots Kayla and waves her in. She goes inside crying and everyone asks what’s going on.

Chad arrives at SPD edgy and looking for Rafe.

Hope arrives home and calls out to Ciara. She’s already gone so Hope turns the lights out and cries by the door.