Summary for Friday November 20 2015: Many flashbacks precede Bo and Hope establishing their love for one another and as Hope asks Bo how long they have, it's revealed how much time they really do have... 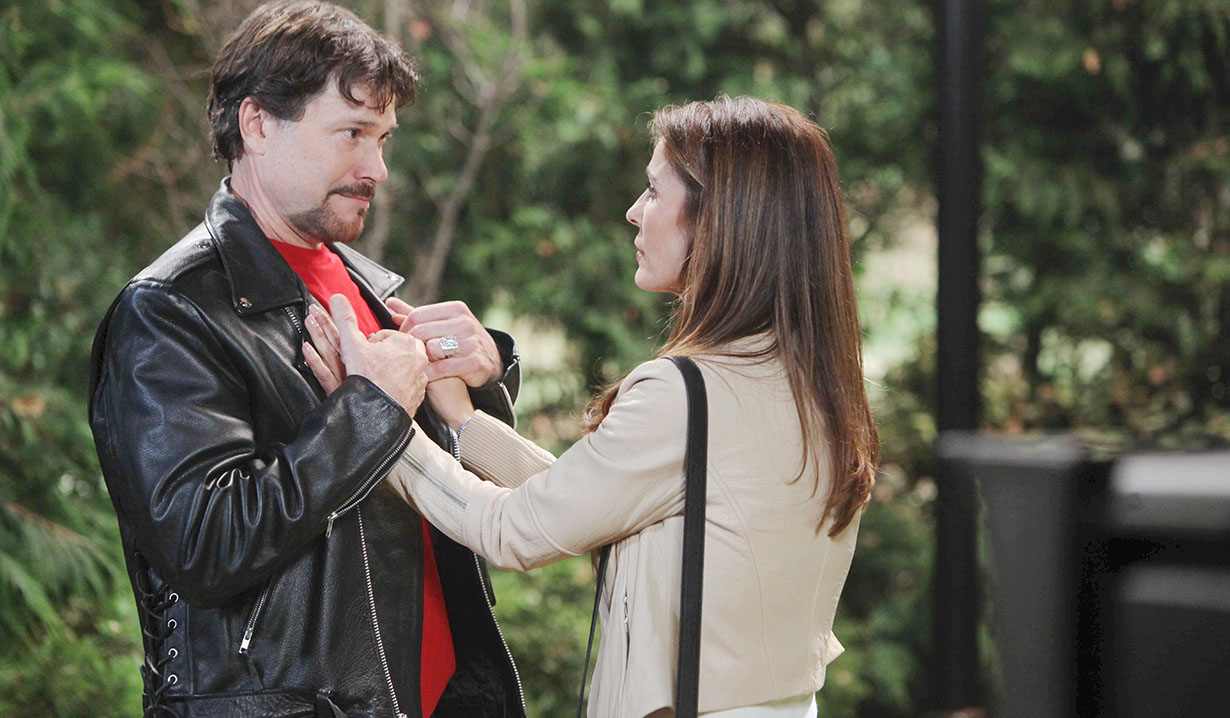 Ciara and Caroline arrive at Bo and Hope’s. Ciara was hoping her party would cheer her parents up but they still seemed so sad. Caroline thinks it’ll take time. Ciara asks if things will ever be normal again. Caroline asks what normal is. They laugh. Caroline says she’s to blame. If she hadn’t been so sick, Bo wouldn’t have went through what he did to make her better. She flashes back to discussing going to California with Bo. Ciara wonders if her dad can forgive her mom for moving on. Caroline laughs and tells her granddaughter about the time Bo fought for Hope when she was about to marry someone else. She’s sure things will work out. Once Caroline goes, Ciara stares at a photo of her parents while she sits in front of the fire.

Outside the pub, Steve tells Bo that he’ll fight this thing. Bo nods. Hope comes out with Kayla and Bo asks her to meet in their special spot in the park after he runs an errand.

Kayla and Steve walk to the parkette and Kayla makes a call to ask if her brother qualifies for a few studies. She’s told it won’t happen and after she disconnects, she sobs. Steve feels he has caused everyone pain by bringing Bo home only to leave them in pain. Kayla says if he hadn’t, Bo would have been alone. He gave them a gift. Steve looks miserable. They share a moment but Kayla pulls away, not wanting to give him the wrong idea. Steve knows she still loves him. They sit and hold hands as they flash back to Bo and Hope.

In the park, Hope flashes to the 80s when Bo bought two dozen tickets for the kissing booth and only kissed Hope on the forehead. She recalls kissing him on the lips and a smile plays at her mouth. Bo arrives with a huge canvas sack. He tells her this is their future. Things get romantic when Hope admits she has no regrets being with him. Bo says Ciara reminds him of Hope. He flashes to showing her his motorbike in the 80s. “Pretty little rich kid who’s nothing but a pain,” he says, telling her to hop on his bike. Hope smiles at the memory. He pulls out a few dozen tickets and she grabs them, laughing through tears. They make-out. Hope asks why he got upset when Ciara suggested they marry. He says there’s something he needs to tell her. They sit on a bench and he tells her he always thought they could overcome anything. “Ma always said the measure of life is quality, not quantity.” He tells her he hasn’t been feeling well lately. He mentions passing out and getting examined. He tells her he has a tumor in his brain. She cries. He tells her it’s growing and inoperable. She sobs and asks, “How much?” He tells her whatever it is, it’s not going to be enough. He shows her what’s inside the bag – it’s an oak tree. He wants to plant it on the spot they first kissed at. Someday their grandchildren will see it. Maybe their great-grandchildren will carve their names in it to let the world know they belong together. They flashback again and kiss.  It’s taken them a long time to get to where they are. He admits he had doubts. He never thought he’d have someone in his life who would make him so happy and feel so alive. He flashes to marrying her for the first time and they make-out some more. Hope admits she fell for Bo the first time she saw him. It’s nothing compared to the love she feels for him now. She recalls their wedding. They kiss and she professes her love as snow starts to fall around them. Hope screams, “No,” as she loses him. Bo passes on in Hope’s arms. “Don’t leave me, Brady,” she sobs.

Caroline arrives home to the pub, smiling when she flashes to Hope and Bo telling her they’re sailing across the world. There’s a montage of flashbacks of Bo and Hope through the years.

Hope lashes out after Bo’s death.