Days Recap: Bo has a shocking favor to ask of Rafe

Summary for Wednesday November 18 2015: Bo and Hope make love, Bo has a serious request of Rafe, Hope has flashbacks, Theo is told he has a sister, and gets comfort about the news from Joey and Ciara. 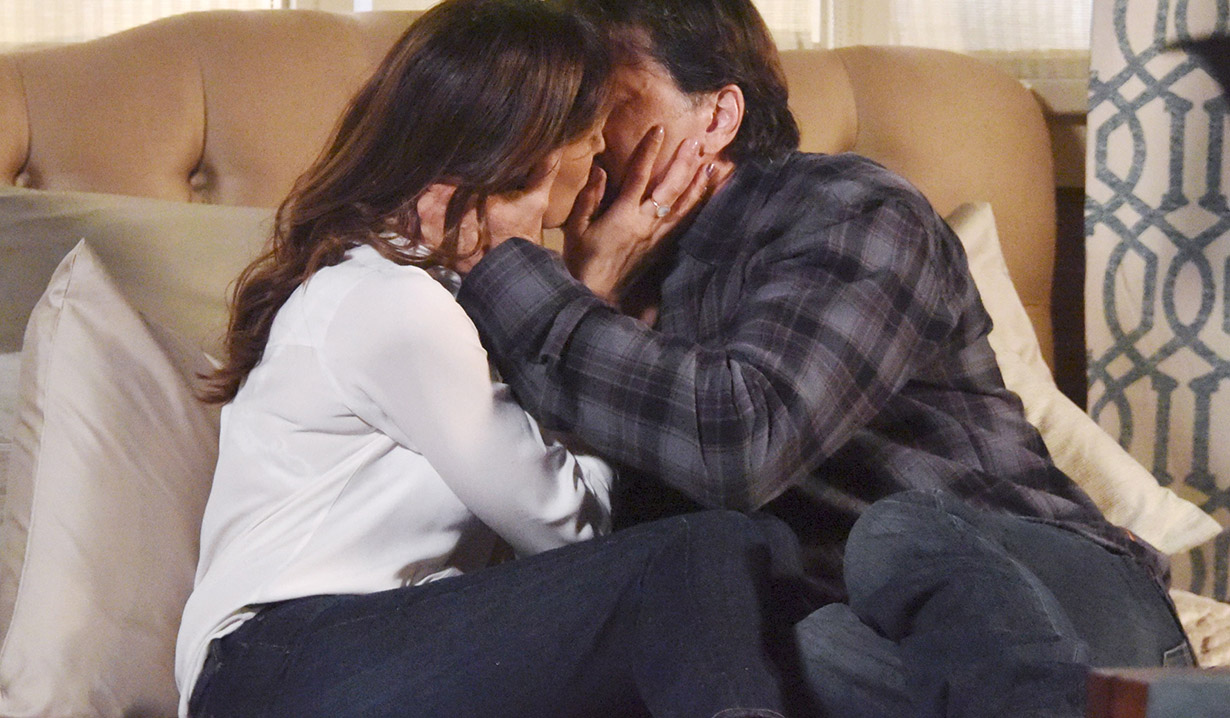 Steve strolls into a room at Salem Inn to find a romantic setting and a note commenting on how romantic it is. He searches the room for recording devices as Kayla arrives. She thinks he lured her here with texts but he didn’t. He knows she can’t be lured in with pre-packaged romance. She shows him the texts. He wonders who sent them. They find the same champagne they served at their wedding. He uncorks it as she bemoans what’s going on. She comments that the texts aren’t menacing. They wonder if it’s anonymous matchmaking with the exception of the first few. He calls her the best thing that ever happened to him. She cries as he tells her he wants her back. They kiss.

At SPD, Rafe tells Abe he’s not sure what he’ll do now that the Necktie Killer case is closed. Theo and Lani talk baseball stats nearby as Abe tells Rafe that Lani’s good with Theo. She knows almost as much baseball as he does. Rafe likes her. Abe takes Theo and leaves and Lani asks Rafe out to watch some show tunes. He’s not really into that. She tells him the Bulls are playing The Pistons. “Right,” he muses. He reminds her he already told her it’s a bad idea for them to date. They need to keep things professional. She pushes it, saying two friends can go see a game together but he declines. In Abe’s office, Theo says he likes Lani. Abe’s glad. Abe gently tells him that Lani is his sister. He explains Tamara Price was someone he knew long before he knew Theo’s mother. Theo’s quiet and tells his dad he wants to go for a walk – alone. Abe looks worried for his son and asks him to say goodbye to Lani, but he doesn’t. Abe goes to Lani and she assumes he told Theo. She comments that he didn’t look happy but Abe thinks he needs time.

Bo and Hope arrive home to Ciara. Hope goes to bed. Ciara encourages her dad to go with her. When Hope gets to her room, she’s startled to find her bloody wedding gown in a garbage bag. Downstairs, Ciara asks her dad to move back in. He notes how she looks after Hope and asks her to keep doing that. She goes and Bo hears Hope scream. He finds her in her room cutting up her gown. Bo calms her down but she can’t live there anymore. Later, he has tossed out her dress and gets into bed with her. They snuggle. He tells her how many people love her and are here for her. She asks if she has him. She’ll always have him. “You’re the love of my life. Always a part of my heart,” he says. Hope replies, “I can get through anything as long as I know you love me.” They laugh through tears and kiss. They make love. Hope falls asleep in Bo’s arms as he fights another headache. Later, he leaves and she awakens. She has visions of Aiden trying to kill her and has a panic attack.

From the pub, Joey asks what the hell Grandma thinks she’s doing, running the place by herself. They debate about who gets the tips.

At the Horton square, Joey tells Theo he’s better. He thanks his friend for saving him. Theo confides that he just learned Lani’s his sister. Joey calls her one good looking sister, which annoys Theo. They discuss what it’s like to have a sister and Ciara pops up. She got her mother a present. Theo thinks that’s nice. He misses his mother. They tell Theo that he has a sister and Ciara’s thrilled. She hugs Theo and he stiffens up. She apologizes but he smiles and his eyes light up. They know this is all scary but will help him through it. Theo’s thankful. Ciara and Joey shrug. They’ve been friends forever. She has to run. Joey can see that Theo’s got a crush on Ciara.

Bo arrives at SPD and in Rafe’s office and tells Rafe he won’t be around much longer. Rafe’s upset, thinking Bo’s bailing on Hope. Bo says that’s not it. “I’m dying.” Rafe’s in shock. Bo says he hasn’t much time. Rafe is speechless. Bo needs him to be there for Hope when he’s gone. Rafe’s emotional but confused. Hope has her family. Bo knows but he has seen Rafe with Hope. “She’s grounded. She’s calm. She knows that you’ll never let her down.” Rafe worries he has already, by being Aiden’s best man. Bo says that’s why he came to him. He knows Rafe loves her and asks him not to deny it. He knows he’ll always do what’s best for her. Rafe’s so upset he takes a seat. “This isn’t fair.” Bo agrees. Caroline calls him to the pub so he leaves.

Bo arrives at the darkened pub and once he’s inside, Caroline turns on the lights. Bo hears, “Surprise!”

John and Marlena put their heads together to figure out how to get Sami back.

Days Recap: While Sami attempts to...