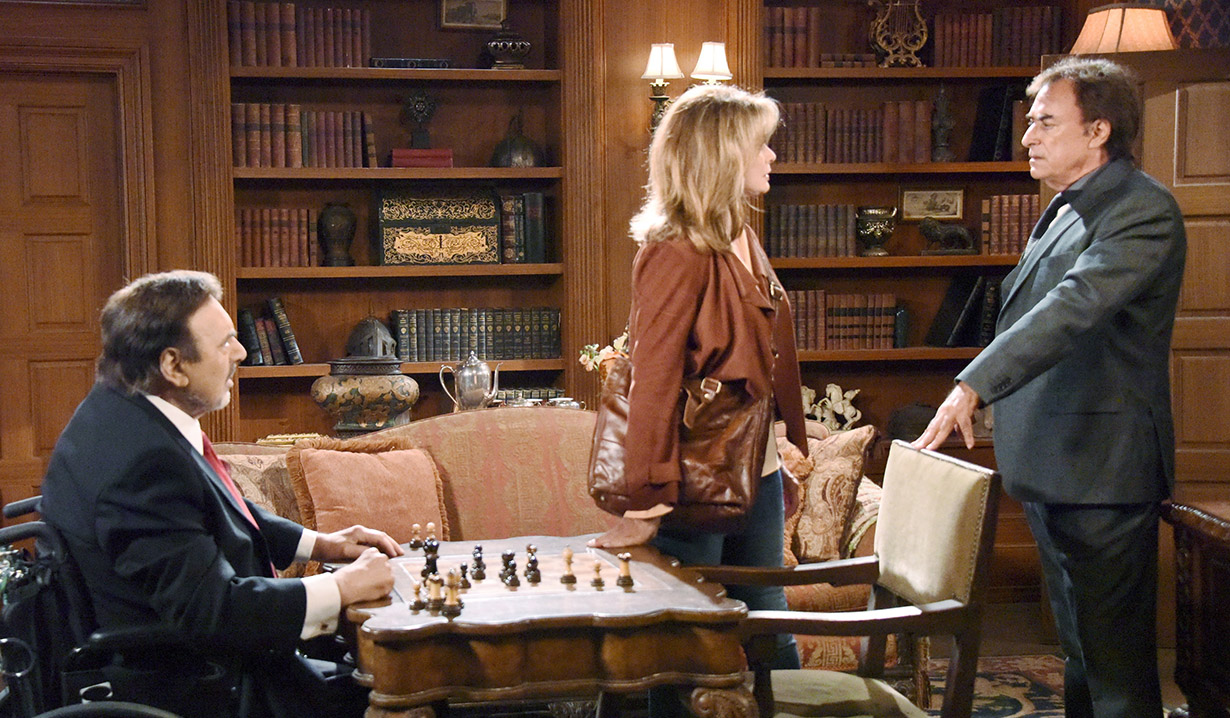 Bo takes Hope from the hospital to talk.

Rafe gets a call and takes off to the ER to talk to a victim.

Back at the hospital, Steve turns up and tells Kayla, “This isn’t how Bo and Hope should end.” She’s grateful he took her brother home. He shows her the anonymous message and admits he doesn’t know who it’s from. She’s pissed and stuns Steve by replying, “We know who you are.” Mystery person says, “If you know who this is then you know it’s serious.” He tells Kay she kicked the hornet’s nest. She has a meeting so leaves him to figure out who they’re dealing with.

From the townhouse, Marlena leaves Sami a message and worries to John that she’s in danger. John calls a contact. They’ve seen nothing happening at the DiMera mansion so maybe she hasn’t started a war. Marlena plans on discussing it further with Eric. Steve arrives and tells them about his threatening texts. He asks for help from the ISA but John tells them he quit. Everyone’s shocked. Marlena questions him but he tells her this is what he wants. They’ll discuss it later. She goes and Steve says he knows how the agency works. “You didn’t quit. They fired your ass!” Steve suggests they become private investigators and open their own business. John’s in. He thinks they should call the firm, “Black Patch.” They do a complicated shake on it and laugh.

Sami attempts to get reception from her cell phone in some dark dungeon where she’s being held. When a goon comes in, she attempts to flee and runs straight into Andre’s arms. He shoves her back in the room and he tells her he knows EJ’s the only way she could have gotten access to that safe deposit box. He threatens her children but she knows Stefano would never harm his grandchildren. “But you’re dealing with me, Sami,” Andre warns. She realizes Stefano doesn’t know what Andre’s up to and questions if he even has access to those accounts. She assumes his plan is to leave Stefano penniless. He laughs. He’d never do that to his family. She offers a deal – access to the account – in return for half the money to secure her children’s future. He laughs. She encourages him to take the business to the ground and to “leave Stefano a dying broken old reptile he deserves to be.” They get nowhere so he leaves. Later, she comes up with a plan.

Bo takes Hope to the woods. They rehash their guilt. She wants him to stop blaming himself. “You first,” he tells her. They laugh and hug. Still, she can’t move on and cries into his arms. He tells her they’ve no time for this but she insists they have all the time in the world. He hides his headache and leaves to see Kayla. He can barely make it through the park, he’s in so much pain.

Marlena bumps into Andre in the park. He tells her that Sami stole personal property from him and stashed it likely at Marlena’s townhouse. Marlena denies knowledge of any of that and asks why he doesn’t turn her over to the Swiss authorities. He tells her there’s no need. He has her. “And she’s being so uncooperative.” He asks for the passwords Sami stole. Marlena doesn’t have them. She suggests he call the bank and change the passwords or get Stefano to. He can’t so she wonders if Stefano’s even involved. He follows her to the DiMera compound.

Bo returns to the hospital and runs into Rafe. He tells him he left Hope in a bad state in the park across the street and Rafe goes to check on her while Bo finds Kayla. He confesses he hasn’t told Hope yet. She urges him to tell her and breaks up sobbing. Once he goes, she tosses her room and screams.

Rafe finds Hope on a park bench sobbing. He comforts her. She feels Bo turned away from her. Rafe tells her half the town is here to hold her up. He promises she’ll get through this.

At the Horton square, Steve gets a message to meet someone at Salem Inn.

Marlena waltzes into the DiMera mansion and asks him to remember that Samantha’s the mother of his granddaughter. Stefano’s confused but silent. Marlena tells him to change his passcodes but not to hurt Samantha. Stefano’s baffled. Marlena rants then leaves. Stefano pounds his table and asks Andre to tell him what’s going on. Andre thinks Marlena’s nuts but he’ll get to the bottom of it.

Steve pokes his head into the room at Salem Inn. There are rose petals on the bed but nobody’s there.

Back at the hospital, Bo leaves Kayla’s office and unnoticed, watches Rafe getting Hope coffee.

Marlena returns home and tells John that Sami was kidnapped by Andre.