Days Recap: Andre DiMera returns to Salem, but that’s not the only shocker

Summary for Wednesday September 23 2015: Andre returns to Salem with a surprise, Aiden makes a threat, Steve gets information that could lead him to Bo, Adrienne learns something heartbreaking, and Bo almost breaks free from his captors. 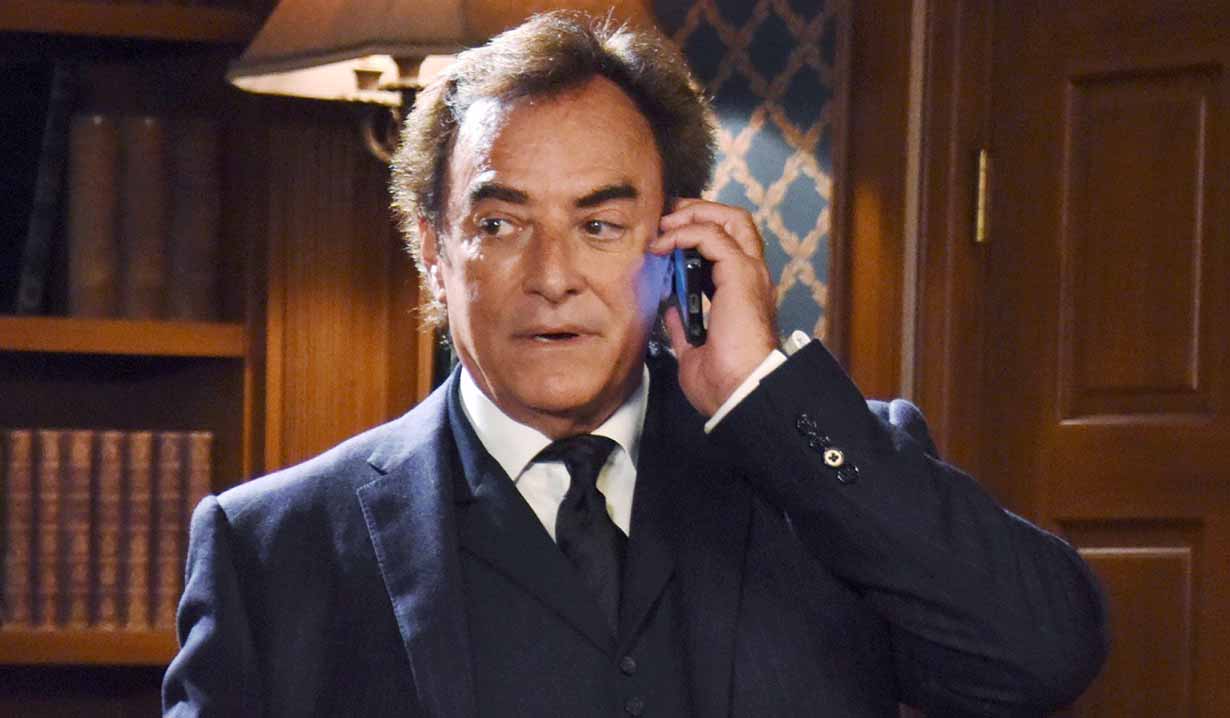 Eddie thanks Eve for meeting him at TBD. He knows how much pain she’s in. “The hell you do,” she deadpans. She tells him his daughter hated him. He wants to help plan and pay for Paige’s funeral. She assumes it’s to put on a show for his kids that are still alive. She’s bitter and tells him how she and Paige used to spend the day together on the anniversary of his abandonment. Eddie’s pained and apologizes.
In the mansion, Stefano tells his goon to bring Chad to him through the tunnels. In walks Andre! He kisses Stefano, who cries, “Andre, dear God.” He made it clear to keep hidden. Andre talks about learning they’re father and son and says Stefano needs him. Stefano booms not to worry. A heart attack won’t bring him down. They talk about Chad being set up and Stefano says Chad must never know that he and Andre are brothers.

In SPD, Aiden gives his word that if Chad DiMera contacts him, he’ll let them know. He goes and Justin berates Rafe for not arresting Chad.

From the Martin mansion, Hope his honored Kayla agreed to be her matron of honor. Aiden calls. He’ll swing by in a bit. Kay tells Hope Steve left town to look for Bo. Steve may be on to something. Hope’s upset.

Steve meets Claudia, the Britta look-alike, on Victor’s plane. He wants to know how she earned the tattoo and what happened to Bo Brady. She tells him she was told to meet Bo and pretend she was Britta’s daughter and got the tattoo to honor her mother. She told Bo her mother was alive and she knew where she was hiding out. That was the end of it. Steve wants more information. She offers sex in return but he’s not interested. He gives her a grand and she gives him a phone number she gave Bo. She leaves and Steve calls John who learns the number was from a monastery in Mexico.
Bo does pushups in his cell, then breaks the anchor that keeps him tethered to the wall by chain. When a man arrives with food, Bo jumps him and chokes him out. Bo’s caught by a man with a gun who ties him to a gurney and puts a Hannibal mask on him. He holds a knife to his throat as Bo gasps.

At home, Adrienne ends a call with her mom and looks shaken.

Lucas stops Aiden in the square. He invites him to play basketball with him and Will but Aiden needs to see Hope about wedding plans. Lucas wishes them luck. He leaves and Aiden runs into Stefano’s goon. DiMera wants to see him.

Aiden’s brought to Stefano at the mansion. Stefano refuses to introduce Andre and asks for the check Aiden stole from his check book. Aiden stammers. Stefano stopped payment on it. Aiden reminds him they had a deal. Stefano dons an oxygen mask and tells him to collect his money in hell. He fires him as Chad’s lawyer. Aiden threatens to tell Hope and the cops everything. Stefano tells him to get lost and Andre gives him a shove out the door and says, “Charming fellow.” Stefano replies, “He’s an idiot.” Andre asks if he can take care of him for Stefano. Stefano says he’s more useful alive. Andre asks what he’s up to and Stefano says, “All in good time.”

Back at the Martin manse, Adrienne texts Kayla to meet.

Adrienne sees Lucas at the hospital. He sprained his wrist during basketball. She’s worried. He’s fine and asks about her and Justin. She says they’re taking things slow. He muses that she’s making a huge mistake. Kayla turns up and they go off to Kay’s office. Adrienne learned her mother has breast cancer. Kay’s sorry. Adrienne says they caught it in time. Adrienne needs to be tested for the BRCA1 gene. She’s frightened but asks Kay not to tell Steve. Later, Steve calls and Kayla says since Joey returned home, he’s not as angry. Steve thinks their conversation had something to do with it. He says if he doesn’t find Bo, he’s still coming home. He’s made a lot of progress today.

Back at SPD, Rafe takes a call from Hope who tells him to get more manpower. They disconnect and a new officer, Lani Price, shows up. He says she came at the best time. He welcomes her to SPD and she gazes at Abe’s photograph thoughtfully. Later, Rafe gets a tip about someone seeing Chad down at the pier. He dashes off.
Aiden returns to the square. His bookie is with Chase. Aiden quietly warns the bookie to stay away from his kid. The man gives him 24 hours to come up with the money or he’ll take Chase. Behind Aiden lurks Stefano’s goon. Later, Lani reads about Abe online.

Aiden arrives at the Martin house upset. He tells Hope he loves her and there’s something he needs to tell her.

Justin arrives at TBD as Eddie goes. She tells Justin that was Paige’s father. Justin asks if he can do anything for her but she says he already has. They hug as Lucas walks in.

Days Recap: The Necktie Killer is...