Days Recap: A man from Eve and Rafe’s past shows up in Salem

Summary for Monday September 21: Eve's ex shows up in Salem, Steve shocks Victor with a photo of the woman Bo was last seen with, and Rafe runs into someone from his past. 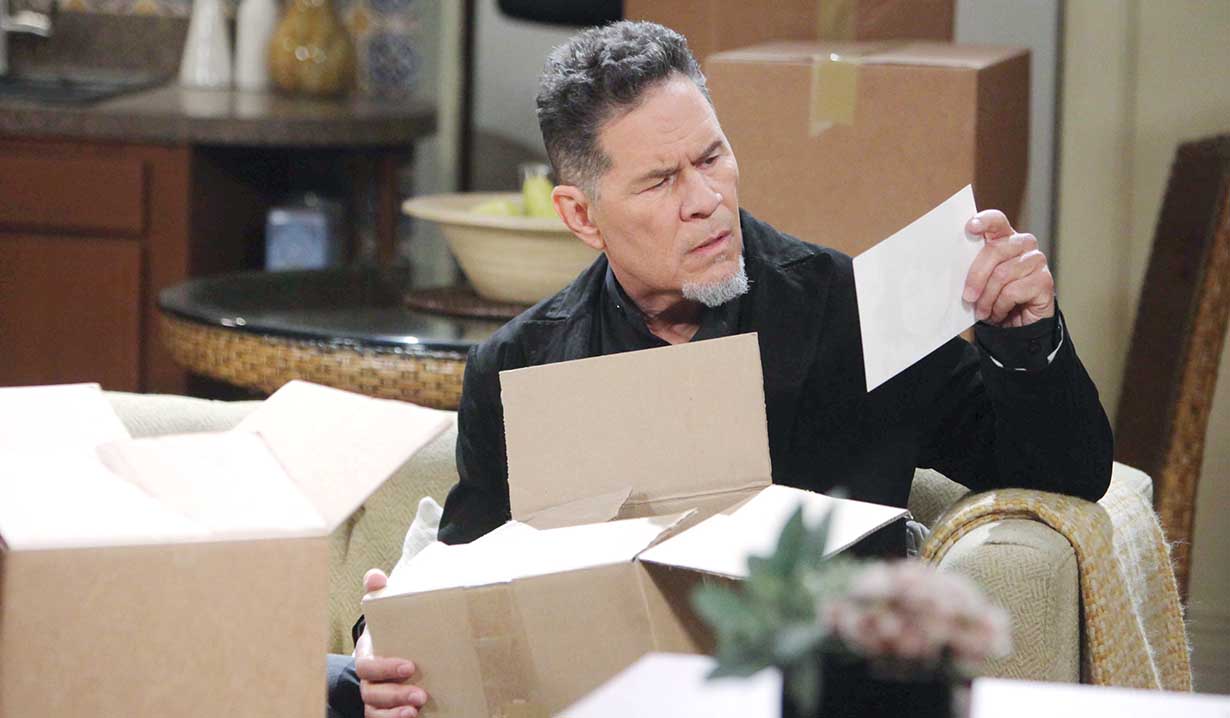 At Eve’s, Theresa called the women’s shelter Paige volunteered for and tells Eve they’ll be by to pick up her clothing. Eve hugs her sister and thanks her for everything. Eve’s shocked when a man shows up at her door. She asks how he found them and then introduces him as Paige’s father, Eduardo. Eve says she’s waited ten years for this moment and asks Theresa to leave them alone. She goes and Eve asks why he’s there. He had to come. She reminds him he ignored court visitation for years. He didn’t think it’d be forever. He never wanted a family but Paige was an angel. “Who wouldn’t love that child?” Eve responds, “You.” He wasn’t worthy of her but he wants to know her. Eve yells it’s too late and shoves a box filled with Paige’s memories at him and bitterly tells him to catch up. She can’t look at them. He offers to keep them for her and offers to help. She tells him Paige got into Stanford. She asks him to call them and tell them she’ll never arrive. She starts crying and beats on Eddie’s chest. He hugs her as she sobs.

Maggie and Julie check on renovations at the Martin house while Caroline hears the Beethoven music once again. She sees Shawn appear in the mirror again and her jaw drops. She asks why he’s showing himself. “Are you getting me ready to die?” She cries that she’s afraid and couldn’t recall Kayla’s name for twenty minutes in her office a few days ago. Nearby, Maggie worries this is too much work for Caroline after the stroke. She and Julie find Caroline looking frightened and take her to the hospital for an examination.

At the hospital, Kayla’s pissed that Joey was suspended for fighting. She asks what happened. Is he trying to get his father’s attention? Joey rolls his eyes and tells her she and his dad are on their own planet sometimes. She’s paged and he goes off to find his father.

At the Kiriakis mansion, Steve tells Victor he’s ready to head to Mexico. Steve demands Vic tell him where Bo went after California. When he doesn’t, Steve shows Victor a photo from a surveillance camera in a bar in Cancun. “God,” exclaims Victor. Steve says he went silent with the ISA from this moment on and the file’s sealed. Victor assumes they think Bo has turned. They recognize the blonde in the photo who has the same tattoo on her right arm of a dagger that Bo and Steve have. “It’s impossible. Britta Englund is dead.” Steve assumes it’s a trap. Victor finally admits Bo disappeared after California while trying to save his mother who they learned has a rare neurological disease which mimics Alzheimer’s. Bo found Dr. Salinas in Peru who had some success with native plants. He’s been pouring money into trials ever since. He tells Steve to keep this between them until there’s a break through. Steve passes Maggie on his way out. He tells her about Steve’s mission and she tells him they had to take Caroline back to the hospital. She doesn’t think Caroline can live alone or manage the pub anymore. Victor explains about Caroline’s disease which mimics Alzheimer’s. He says Kayla knows but Caroline doesn’t. They didn’t tell her because it’s more aggressive. Maggie’s heartbroken, worried they may not find the cure until it’s too late.

Bo does push-ups in his cell until the guard arrives with food. He feigns being asleep and the man says it won’t be long now. He doesn’t know why he bothers feeding him anymore. When he leaves, Bo hungrily stuffs the food in his face and tries to escape.

The florist texts Hope about the wedding at SPD and Rafe congratulates her. Hope asks if he’s really happy for her. Of course he is. Aiden’s a stand-up guy. They talk about Gabi’s release and how he has his family back. He heads to the crime scene as she calls in some lab results.

Aiden sits at TBD trying to replicate Stefano’s signature. He signs a check with Stefano’s name and then rips it up. When his credit card is declined, he hands over cash and holds his head in his hands.

Back at the hospital, Kayla tells Caroline that her vitals are good. Caroline asks then why she’s seeing Shawn everywhere. She needs to know if she’s dying so she can take care of her affairs. Kayla admits things are progressing. She calls Caroline a fighter and says they’ll get through this.

Aiden waltzes into SPD and makes out with Hope. He asks how the case against Chad is going.

Steve tells the captain of the plane he’s ready to go. Later, he hears a noise and takes out a switch blade. He opens a compartment and finds a stowaway – Joey!

Rafe bumps into Eddie in the square and asks, “What the hell are you doing here?”

Nicole learns who her silent investor is.