Days Recap: Aiden’s shocked when somebody pays off his rather large debt

Summary for Monday September 28 2015: Hope learns that Aiden's in debt, Bo's brought to a new location, Steve finds something rather interesting, JJ and Jennifer figure out they're being spied on, and Ben remembers strangling Serena and Paige. 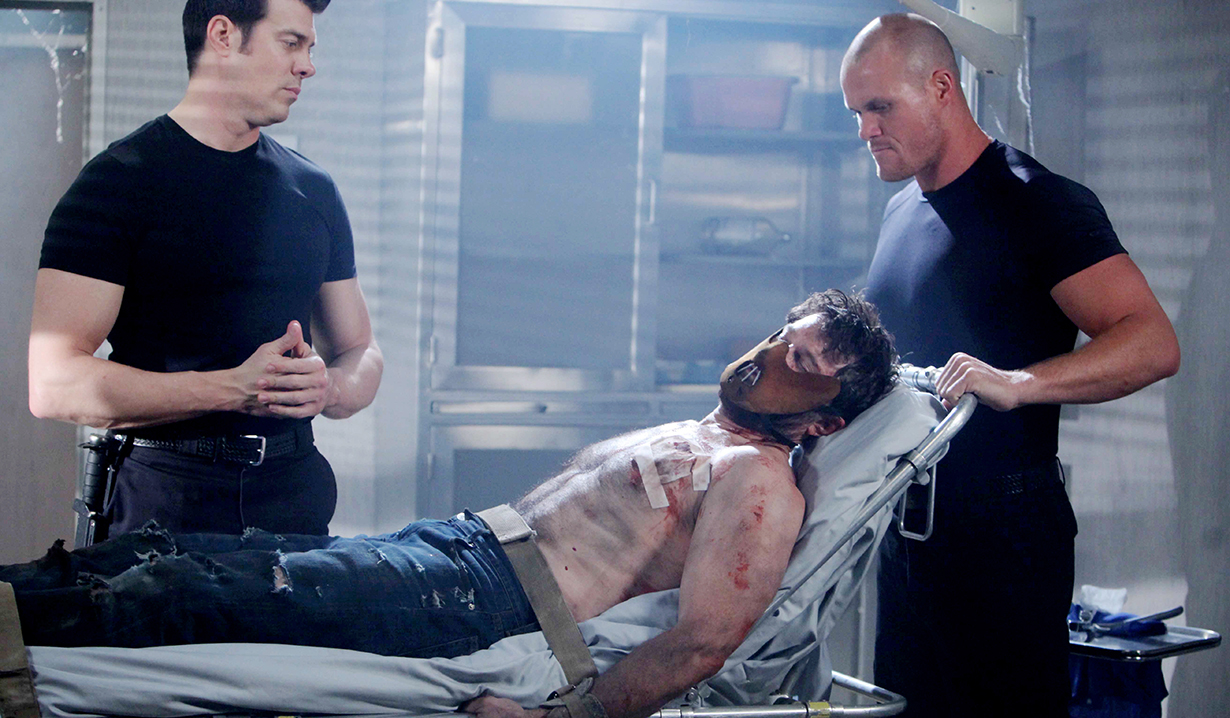 Rafe shows up at the pier. The officers haven’t spotted DiMera yet. He’s pissed and finds a necklace he assumes belongs to Abigail Deveraux which holds photos of Abigail’s mother and brother.

Abigail arrives to the fishing shack, disguised. Chad’s thankful she’s there. She’s uncomfortable but hands over some food. Concerned for her safety, he doesn’t think she should return. They say an emotional goodbye and Chad writes a journal about what he recalls the night of the murders and the bum he struggled with. He remembers the bum asking him the time and looking at his watch. It was 2:35. Then the bum tried to steal his watch. Chad’s got to find him.

Ben wakes up and recalls strangling Serena, watching her struggle and die. He sees her in the mirror and starts to crack, then recalls following Paige into her dorm and bathroom and strangling her, too. “I…I didn’t mean to,” he mumbles. “I couldn’t have.” He sees Paige’s dead body and him dropping flowers on her. He says, “It was Chad.” He sits in the dark until Abigail gets home. He’s clearly upset and says he didn’t think she’d come back. He apologizes for attacking her at the hospital. “It’s like I lose all control sometimes.” He asks where she was and she lies that she was with her mom. He’s been thinking. They’re not leaving Salem. Abby’s thrilled. He tells her he’d do anything for her. “Anything.” Rafe arrives to talk to Abby alone – police business. Ben leaves but eavesdrops. Rafe shows Abigail her necklace he found at the docks. He hands it over and asks why she was there. She lies that she went there after a fight with Ben. He asks if she saw Chad there but she lies and touts Chad’s innocence. She tells Rafe she’s not trying to get Chad out of the country and that she’s pregnant and her baby and Ben are the most important people in her life. He thanks her and goes. Ben returns and Abby heads to bed, tired while Ben wants Chad to pay for what he “made me do.”

At Jenn’s, she tells Roman that JJ’s supposed to check in with him and Agent Watts at least once a day. It’s been 48 hours. Jenn explains that JJ’s grieving and worried for their safety. Jenn freaks out. JJ needs to get out of Salem and stay away. Roman asks if she’s keeping something from him. Before she says anything, JJ arrives. He tells Roman Kyle’s missing and lies that he never did find out who Kyle reports to. In fact, he wants out. Roman tells him to keep his head down and take care. He leaves and Jenn says she kept quiet but wants JJ to tell Roman about Clyde Weston. JJ can’t. “The guy is not right in the head.” He wonders if Clyde planted a bug and starts searching. He finds Eve’s bug and assumes it’s Clyde’s. Jenn thinks it’s possible it’s Eve’s, and that’s how she learned he was working undercover. They argue. JJ knows he won’t touch Abigail but worries for Jenn’s safety.

At the Martin mansion, Aiden’s ashamed as he tells Hope he’s drowning in debt after making some bad investments. He went to lenders who weren’t on the up and up and is in so deep, he may not survive. Hope’s angry that he took until now to tell her this. She cries that she wants his trust and wonders what else he’s keeping a secret. Aiden knows there’s no way to justify what he did but he didn’t want her to see him as a failure. He assumes she wants him out of her life but she loves him. When asked, he admits the amount is $100,000 and that he’s being watched. Hope makes a call and transfers money and hands him a check. He feels awful but Hope reminds him they’re getting married. There are no room for secrets. They hug. Hope says they can skip details until after he has things sorted.

Steve arrives in Bo’s empty cell. “Looks like they turned this old monastery into a prison.” He finds a carved hole in the wall full of pills. He calls someone to run a fast DNA test.

Bo’s taken unconscious strapped to a gurney into a dusty old room by two goons. He hasn’t been broken yet. Once alone, Bo awakens and struggles.

Aiden brings a check to the goon in the park but he tells Aiden his debt has already been paid. “By whom?” Aiden asks. “Your guess is as good as mine,” the guy says and goes. Aiden finds Hope in the square and tells her it’s taken care of. He promises there are no more secrets. Aiden gets a text from Stefano who has new business to discuss.

Back at SPD, Rafe tells Roman he thinks Abigail’s keeping something from him about Chad.

Eve gets help with her grief.

Lani knows a lot about Abe.

Days Recap: A kiss occurs between...