April 3, 2014: On Days of our Lives today, Sonny and Will are married by Marlena, the reception begins, and Liam breaks into Daniel's place. 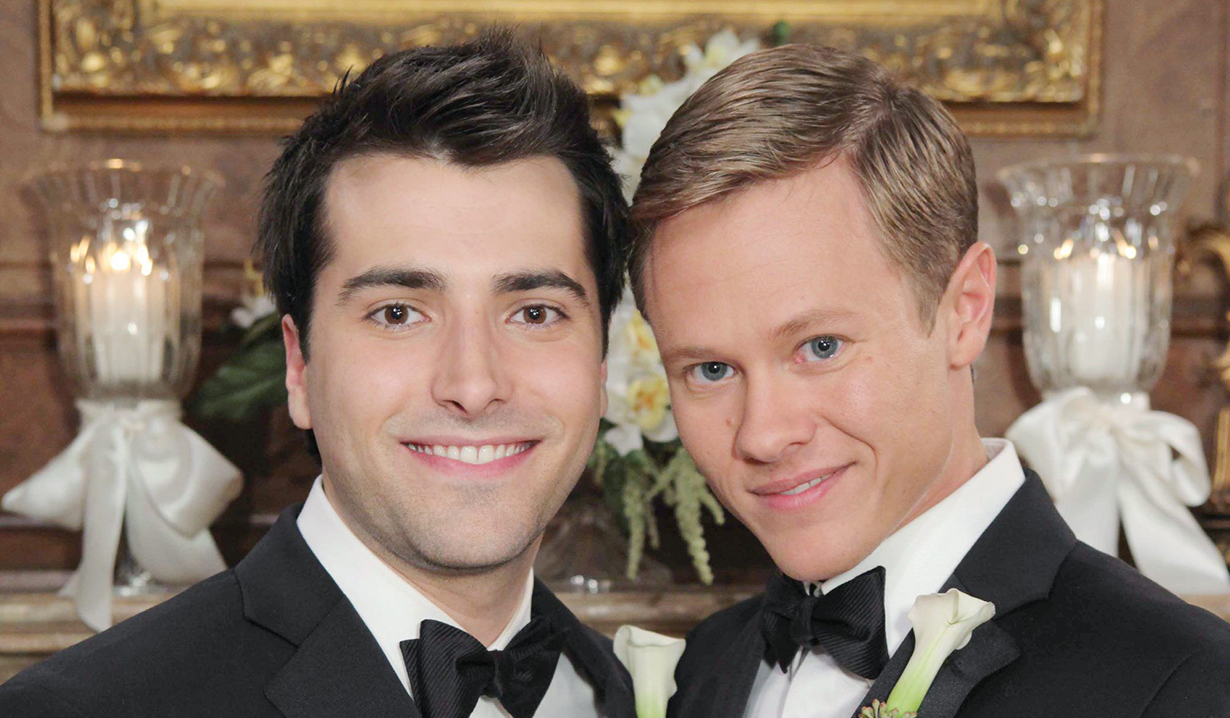 Marlena begins the wedding ceremony for Will and Sonny at the Kiriakis mansion. She asks Caroline to say a speech but Caroline stays seated, confused. Everyone looks nervous. Will goes to her and she remembers his name and goes to the podium. She talks about her first customers at the pub and the guests look puzzled. She says there was one man ignored by his family and she couldn't figure out why - until she realized he was gay. Everyone starts to weep as she says it gave her pause. She's so proud that her grandson and Sonny will never have that problem with their family. She gives them kisses and takes a seat. Everyone claps. Justin recalls Sonny having no fear. When he was fifteen, he came out and once again showed his fearlessness. Justin's in awe of his son who can handle anything. Lucas gets up and jokes that Will's coming out was identical. Everybody laughs and Lucas says Will was a better son than he and Sami deserved. Lucas is sorry for his original reaction to Will coming out. It wasn't the life he envisioned when Will was born...It's better. Sami cries. Lucas is proud and holds Will close. WilSon's sexy guitar music plays while Sonny tells the family to take a look at some old photos of all of those who have supported them. They thank their guests and say their vows. Sonny calls their life together the greatest adventure of his life. Will admits he never thought about his future and didn't know he'd find love like this. Will says he respects, admires, adores and loves Sonny. Sonny cries. They exchange rings and say their vows. Marlena pronounces them husbands for life. The men kiss and balloons fall from the ceiling. Everyone mingles and Will tells Sami she and Lucas taught him that family is the most important thing. Sami's proud. Victor asks Caroline for a copy of that speech. Nearby, Ciara tells Theresa her bag "is to die for." Theresa says it's a gift and promises to teach her how to wrap boys around her finger in middle school. Abby, Gabi, and Jordan hang out outside and Abby looks uncomfortable when EJ and Sami stroll out, kissing. They head back inside and JJ strums guitar during the first dance. EJ later tells the guys Sami has reserved a room at the Salem Inn for them. Sonny swears to Will they'll have a honeymoon, soon. They thank Marlena for officiating. Roman says Carrie couldn't come because the baby was too sick to fly with an ear infection. They're sad to miss the wedding. It's the best Roman he has ever been to. The men embrace. Theresa goes to Jenn. "I hear you've been talking smack about me." Jenn doesn't want to talk to her. Abby drags Jenn away and JJ asks Theresa to back off. A waiter accidentally spills the contents of his platter over Theresa's dress causing Jenn and Abby to laugh. Eric and Jenn leave to go find Nicole and Daniel while Brady follows Theresa into his bedroom where she cleans up. Roman catches them kissing and cautions Brady not to hurt Theresa. Downstairs, Sami and Adrienne both want to give the first toast. They say a speech together and start competing over who is going to be the most generous. EJ saves the day and ends the toast. Everyone laughs. Will drags Kate outside to ask if she's upset that they asked Marlena to officiate. Kate's fine with it and happy Marlena's been there for him. She cries. Will tells her Marlena's a lousy poker player. Kate taught him everything about poker. She also taught him how to stand up for himself and survive. They hug and later, the guys cut the cake and feed it to each other. When they're ready to go, the guests throw confetti at them.

Liam hides when Nicole and Daniel arrive at Jennifer's. While Daniel's upstairs to get some old toys, Nicole receives a call from Miles. She goes outside and Liam hides in the kitchen. Daniel and Nicole return and rummage through the toys for Parker. They look at Jenn's checkbook and joke about how she doesn't keep things organized. They put it down and go.

Nicole and Daniel arrive back at Daniel's place. Eric texts Nicole a photo of Will and Sonny. She can't wait to plan her own wedding and notices Daniel looks distant. He's flashing back to Eric talking about being unable to marry Nicole. He says nothing and they leave for lunch. Liam arrives and uses a key to get inside. He puts Jenn's checkbook into the toy box.

Nicole and Daniel eat at Club TBD. Nicole gushes about her wedding and asks why Daniel looks glum. He won't tell her anything but she guesses it's about her wedding. Eric and Jenn arrive and Nicole confronts Eric so the other couple leaves and Eric says it's time he was honest.

Jenn and Daniel return to his place. She finds her checkbook in the toy box and questions why he has it. He's confused. Liam has bugged the place and eavesdrops on their conversation.