I Hope He Kicks It.

EJ's rushed into surgery, Sonny arrives in Salem, and Gabi goes to Caroline for advice. 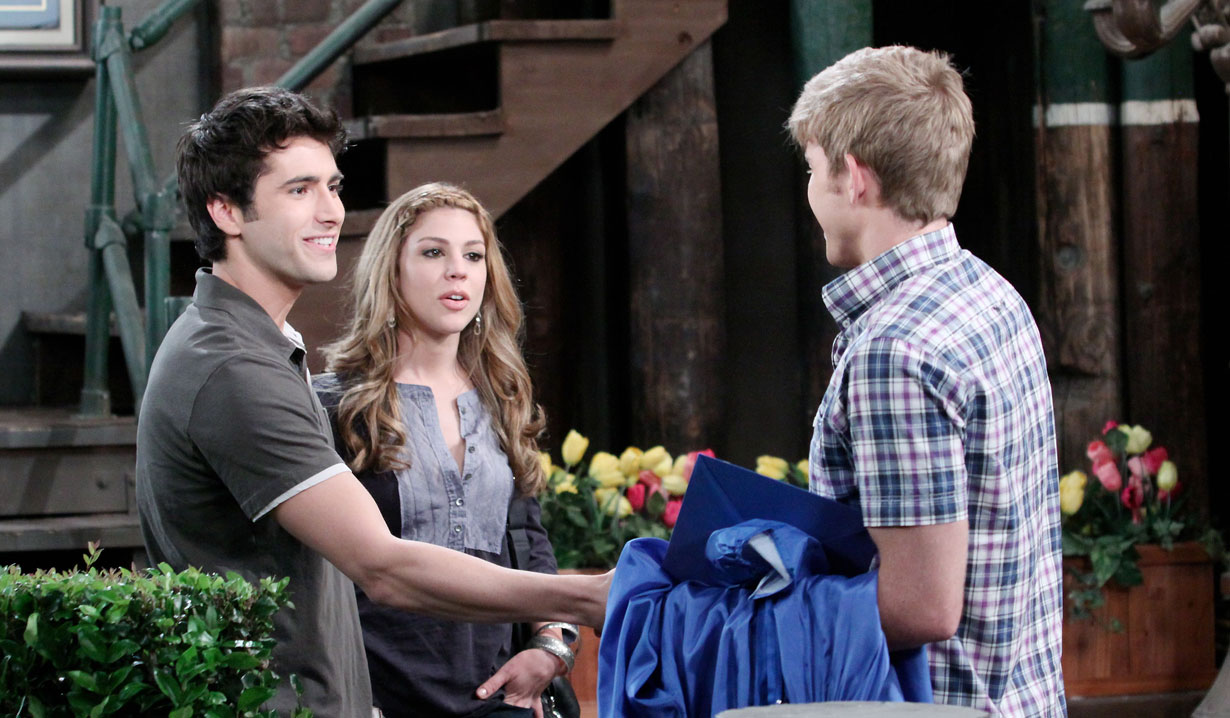 Taylor paces the pier demanding Hope tell her why she’s being detained. Hope says she’s a witness. Taylor becomes more and more agitated and when Hope moves in, Taylor pushes Hope, knocking her down. Hope hits her head and loses consciousness. She gets up soon after, so Taylor runs off. Hope passes out again. Adrienne and Justin come across her and Hope gets up and calls Bo.

At the hospital, Nicole threatens to prove she knows what Stefano did while EJ loses consciousness in his room after Bo badgers him. Lexi and Maxine rush in and kick Bo out. Stefano and Nicole confront him but Lexi interrupts to tell the family that EJ's blood pressure dropped. He's bleeding internally. They have to operate. Taylor arrives and informs Bo that Hope fell, but she's fine. He takes Hope's call and agrees to meet her later. Stefano tells Kate and Chad the beating on EJ was intentional. Chad asks if they think Rafe's a suspect, but claims he's back to his old self. Bo eavesdrops and then leaves. Nearby, Nicole tells Taylor, "I hope he kicks it." Stefano orders Maxine to bump up security and get rid of Taylor but she doesn't budge. Kate pushes her weight around but Lexi returns with good news. EJ's going to be fine. Taylor almost passes out with relief. Stefano is glad to hear his son is out of the woods and promises to keep his family out of danger. They discuss how EJ wants to be on his own. Kate thinks he'll be bored after six months with Taylor. Stefano loves that she understands him. They agree they're perfect for each other.

At the pub, Will and Gabi take photos of themselves in their graduation regalia before rehearsal. Kinsey and T wander in not looking forward to the ceremony. Gabi hears that her mother broke her leg and can't make graduation. Will comforts her and neither is sure Rafe and Sami will turn up. Caroline interrupts and reassures them.

Abby bumps into Sonny Kiriakis on the pier. Gabi and Will arrive and introductions are made. They explain that Sonny (Jackson) is Justin and Adrienne's son. Will and Gabi leave and Sonny shares how he's been backpacking around Europe. Abby gushes about her love life and how cute, funny and smart Chad is. Sonny's surprised to hear he's a DiMera.

Bo runs into Cheatin' Heart as Adrienne's icing Hope's head. She insists she's fine but Bo wishes she'd have her head examined. He fills her in on EJ's internal bleeding and how he didn't see the footage. They worry that Stefano knows Rafe's back to his old self and head to the hospital. Justin makes out with Adrienne. Sonny arrives, surprising his parents. There are hugs all around but their faces drop when he admits he's excited to see Uncle Victor. Sonny assumes his parents haven't told Victor about him yet.

Nicole talks to herself in the park, trying to make sense out of her mother's secret. Faye's ghost pops up and tells her she's on the right track about the secret being about Rafe. Nicole blames herself for Faye's death. She shouldn't have moved her into the mansion or married EJ. Faye tells her to get Taylor away from EJ and to remember that Taylor's not the enemy.

Back at the pub, Kinsey complains about her lack of money and teases Gabi that she and Will haven't 'done the deed'. Gabi's disgusted and calls her inappropriate. Will walks in and Gabi asks for a kiss. He's uneasy about public displays of affection so she steals one. Caroline and the others watch, smiling. Will breaks away and starts stammering about getting the dry cleaning for his mum and runs away when Gabi suggests they go to her room. Caroline goes to Gabi, sorry her mother's not going to make graduation and offers to lend an ear about Will. Gabi admits sometimes she thinks he's not into her. Caroline suggests she's rushing things. Will doesn't want to make the same mistakes Sami did. Will returns and Gabi shares Caroline's advice.

Abby turns up at the hospital and comforts Chad, who is almost in tears explaining that his brother could have died. Kate shoots daggers from across the room. In EJ's room, Stefano vows to find the person who did this. EJ wakes up and Stefano leaves as Taylor walks in. She shares that Rafe killed her mother and EJ sucks in some air and starts stammering. In another room, Chad tells Abby how alone he felt when Madeline died and how Stefano has made him feel like family. At the nurse's station, Stefano can't find Chad. He goes to get word on EJ from Lexi, and Kate vows that Abby won't interfere with Chad and Stefano's new found closeness.

Salem Spoilers For The Next Days of our Lives:

Victor yells, "Brady, put down drink. He tells Nicole to get out of his house.

Taylor tells EJ, "You have to tell me the truth."

Read Days of our Lives Day Ahead Recaps on Soaps.com by checking for the latest update in the character bios in the DOOL Castlist. Use one of the character names from the above spoilers!

Please abide by the Guidelines when posting and Contact a moderator if one is required to handle comment issues. Feel Free to check out DOOL's late breaking news, Comings and Goings, and DOOL Spoilers!! Screen shots may not be used without express permission from Soaps.com.

Are You Accusing Me Of Doing Drugs?