In the forums 'alwaysEJ' gave her opinion on the matter. "I think the writers are concentrating really hard on writing Chloe and Daniel's dialogue so they're overlooking details in other storylines." *snicker* Even scarier, 'Nicole Fan’ says, "They really are not utilizing Joseph Mascolo's acting abilities. My goodness, Stephanie Johnson is more evil than Stefano!" And as John Black would have said, "That's a fact."

Who is the daddy?
Chloe and Daniel learned from "The Mouth," that they're going to have a baby. Or is the kid’s Philly’s? Do the writers have amnesia? Did they forget that we just went through a few of these insipid 'who's the daddy' storylines to last us a decade? Vote on who you think is the father of Chloe's baby, unless you’d prefer to down your sorrows in a few bottles of merlot.

Philip told Melanie he’s tired of people always trying to ruin Chloe’s happiness. First Kate and now Carly. I suppose he makes a point though he's only defending her because of his betrayal. He reminded his wife to keep her nose out of her father’s business but considering the writers have cut off Melanie’s youth, and vitality and turned her into Maggie 2.0, that won’t be likely. I unencumbered Melanie. Why are the writers turning this 20 year old into a 50 year old who has nothing better to do than worry about what everyone else is doing? Shouldn't she be having fun? Perhaps if they'd been father and daughter for more than five minutes this storyline would work but even then, I’d rather see her footloose and fancy free.

Hypocrite!
EJ told Nicole, "Even Alice Horton didn’t love you." Well, EJ sure loved Nicole! Not only that but his crimes spanning his first step into Salem by far overshadow Nicole’s! If anyone can and should understand her it’s him. Hell, EJ even understands Sami Brady.

Nicole assumed EJ hasn't gotten any arse since her. Men are quite different than women after a break up and normally I’d place bets he had somebody within weeks, but I somehow don't think sex is high on EJ's priority list even though Nicole claims he got cranky when he didn't get any. With him and any other DiMera, business has always come first, and then family.

Did you notice in Arianna's cell EJ always holds his folders up high close to his body? (I counted 5 scenes!) I keep waiting for him to wave them around in one of his wild hand gestures. It’s kind of weirding me out that he hasn't!

Goodbye Mia:
How unoriginal that Madeline paid off Mia to leave Salem, for the High School of Performing Arts. We were cheated out of a Mia/Maggie goodbye but we saw how much Madeline resembles Kate and at least Mia will likely have a chance in the world considering that pay off was generous for a teenager. 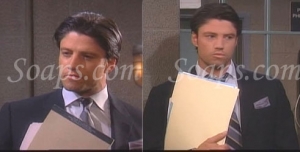 You’re in for a rant. Sometimes the show leaves me no other recourse than to prattle on about the issues I see. Maybe next week I’ll sing their praises!

Tribute.
The tribute to Alice Horton (Frances Reid) ended this week with her death and the memorial service. All in all I felt the tribute could have been written much better than it was. Mostly I was bored. Tuesday’s episode had Matt and I almost in a coma. I don’t think it would have helped any to have more family members there. Who knew making doughnuts could put one to sleep?
A few highlights…Julie confounded me when she said she couldn’t imagine planning her own funeral service. Considering her advanced age, I’d have thought she and Doug would both have already planned theirs. It was great to see Jennifer and Mike together but I did missed Jack. When Carrie and Sami made amends I felt it was just another neatly tied up storyline but what the fans would want to see. The one character I’d love to stick around is Kayla. It was fun to watch her rant at her stubborn brother.

Friday’s episode was a respite from the monotony and we were treated to some very touching scenes and haunting music. Mike missing out on saying goodbye to his Gran was very realistic and touching, while Kate calling Sami away from the memorial when Johnny had a fever was a surprisingly sweet moment between these two sworn enemies. Let’s hope they don’t turn over a new leaf but have some animosity to spare now and again. I felt Friday’s episode was really well done but I’m ready to move on.

Blackmailing Stefano.
I’m completely baffled. I love that Kate and Stefano have their own storyline but my interest is starting to wan because there are too many holes in the writing. I was hidden in the park listening to Stefano tell Madeline that her blackmailing scheme is over and thought I heard incorrectly. What blackmailing scheme? She wasn’t blackmailing him. Anyway, even if she considered blackmail, Madeline has just as much to lose by keeping that VHS VCR tape as Stefano did. Few questions – Was Stefano a pimp? What’s Kate’s part in this? And more importantly, why does Stefano have a VCR in his mausoleum? Though we heard Stefano’s voice on the tape, could it have been Kate who actually killed the man? Do you care? And as for that envelope full of gossip that Kate found, do you assume that Chad’s a DiMera? They do need a few new DiMeras to take over once Stefano’s gone and Stefano has always had kids coming out of the woodwork. 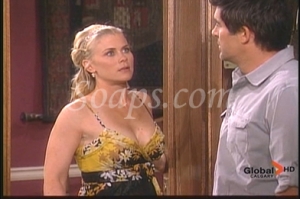