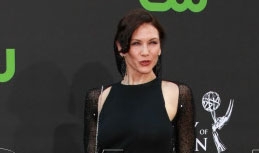 Though we were looking forward to seeing Stacy in Salem the actress has reported on her Facebook, “For all you guys out there who were all set to watch me on DAYS I have some bad news. DAYS has dropped me. It all started when I booked a guest spot on a new show for FOX, RIDE-ALONG. The show will shoot in Chicago and I have to leave town for that. There was a conflict in scheduling so FOX pushed me to their second week. But when ONE day was still in conflict, instead of working things out DAYS decided to drop me.” Apparently she’ll still be appearing in a few episodes, from previous taped scenes, but the role will be recast.

A rep from the studio has confirmed for Soaps.com that Stacy Haiduk who was just let go as Patti/Emily on Young and The Restless is coming to Days of Our Lives in September to play a prison warden.

What are your thoughts about Stacy coming to DOOL and will you miss her on Y&R?

Days of our Lives Video Promo: Kate Reaches Out To Chad