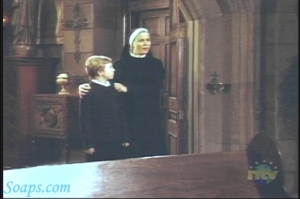 Days of Our Lives has had a few newcomers show up in Salem recently. Many of you have been emailing us with questions as to who these actors are, while others are posting in the message boards about how much they’ve enjoyed them. I’ve posted a little info about the new characters in the comings and goings, but there is only room for so much, so that’s why we have this handy article!

First off, you all must have thought that young actor who played Shawn Brady Sr. was a cutie. We thought he did a fine job portraying young Shawn Brady Senior, with the scenes between he and Colleen Brady (Alison Sweeney) and young Stefano DiMera (No word yet on who played him).

Tanner Maguire played the role of young Shawn Brady Senior. He’s not exactly a newcomer to acting, and has been in television commercials, has played Josiah, in ‘Saving Sarah Cain’ (2007), as well as Ben in ‘Janine’ in (2006). Before that, he portrayed a little boy in ‘Midnight Clear’, in (2005) and in addition to a few other parts, he was Young Zach in ‘Desperate Housewives’ in 4 episodes from 2005-2006. It turns out that the Maquire family has another child actor in their midst! Tanner has an older sister, Payton McGuire, who has worked on ER and played a child in a series called ‘Til Death’

Wondering where you’ve seen that comical nurse ‘Jillian’ who tended to Shawn Brady’s (Brandon Beemer) burns at University Hospital? Since so many of you enjoyed her time on the show, I spoke with a pal at Days and they told me that her name is Aloma Wright, and although she has done a few commercials, Aloma is well known for playing a nurse! You may know her for her role in ‘Scrubs’ as Nurse Laverne Roberts, from 2001- 2007, or remember her from comedy, ‘Mr. Deeds’, as Coretta Keeling, the Cat Lady! In addition to many films and videos and past television sitcoms, Aloma is a graduate of the American Academy of Dramatic Arts, and mother of one.

William Bumiller recently played the role of a rude passenger (Mr. Lowell) who tried to make a pass at Stephanie, until Max hit him. He used Michelle Pierce's character, Jenna, to get back at Max for humiliating him. Did any of you recognize him as David Lockhart?! He played Mr. Lockhart in the March 1 episode where Mimi (Farah Fath) finds out that she accidentally killed her father and blocked it out!

Max meets a blonde vixen working for Mr. Lowell. Jenna, played by Michelle Pierce, arrives in Vegas for some payback, on August 20 & 21. Michelle has been a busy girl these past few years! You may remember her from episodes on 'Desperate Housewives' or 'Criminal Minds' or from this summer's blockbuster, 'Transformers'! She's also just wrapped up 'Not Another High School Show' this year that's in post-production, where she plays the role of a step-mother! Not exactly what I think of when I think of her romp with Max in the elevator on a recent show!

A fan of "Ilsa's" (Tom B) emailed, asking where he'd seen her before. Newcomer, Sanya Mateyas (Ilsa) has been in an episode of 'CSI:Crime Scene Investigation' two years back, and did an episode on 'The King of Queens' that same year. Sanya is also a composer, and has toured as a singer in the West Coast branch of the Trans-Siberian Orchestra! To find out more about Sanya, please visit her creative website!

You've been asking yourself just who is this Denise Boutte who portrays Jett Carver's (Marcus Patrick) fake fiancé, Danielle Calder! Denise has been in an episode of 'Girlfriends', and 'Boston Legal', as well as 'Everybody Hates Chris'. She has also been in a few drama/horror films such as 'Van Helsing's Way of the Vampire' and 'Death Valley: The Revenge of Bloody Bill'. In the past, Denise has also had parts in Theater. Denise played 'Rachel Isum Robinson' in the Freemont Center Theatre's production of 'National Pastime'. Her portrayal was said to be "magnetic", by film critics. Incidentally, this is the same theater that is owned by James Reynolds, who plays Abe Carver, on Days!

Former Days stars: Where are they...