Throwback to More Days of Our Lives Moments That Had Us Saying WTF?

More strange moments in our favorite NBC soap opera, Days of our Lives.

Due to the overwhelming feedback after the first Top 10 ‘WTF’ Moments on Days of Our Lives, Soaps.com presents several more.

Charity Rahmer played Belle Black for two seconds during this storyline when Jan Spears kidnapped Shawn Brady and held him captive in a cage. Poor Shawn was so delirious, he hallucinated that Belle was Uma Thurman ala Kill Bill and fought Jan to save him. This was complete with cheesy music and special effects, and a shirtless Shawn.

Temporarily poor, Vivian tricked a man named Jonesy into marrying her so that when he died, Vivian inherited all of his stolen treasures. These riches actually belonged to Stefano who had put them in Jonesey’s name, so Stefano had Dr. Rolf plant a mood-altering chip in Vivian’s tooth in order to control her so that he could get his treasures back. Stefano continued controlling her even after he married her and got his riches. Eventually, Vivian’s herb doctor found the chip. Soon afterward, Vivian and Ivan left Salem on an air-balloon of all things.

When her best friend, Mimi Lockhart, was suddenly poor and homeless, Belle Black and the rest of the Salem High gang got together with Habitat for Humanity to build her a new house. While Mimi lived on the street she always had the money for the latest fashion, the class field trip to Puerto Rico and the prom.

EJ, Stephanie, and Max’s 15 minutes of fame as race car drivers ended quicker than this plot. Where are these world-famous race car drivers now? EJ is Stefano DiMera junior and a lawyer. Stephanie is a hospital admin assistant, and Max is in med school. Hopefully, Max’s patients don’t recognize him as the race car driver. Would you want an ex-race car driver operating on you? I bet we’ll soon learn EJ’s actually a doctor as well. I’d love to see his resume.

In order to spy on the Gemini twins Rex and Cassie Brady, Dr. Rolf became a bioethics professor at Salem U. Dr. Rolf temporarily died when a crate fell on him at the docks. What makes this a ‘WTF’ moment? Not that Dr. Rolf returned to Salem with Stefano, both from the dead, but that he was alive even after Mimi Lockhart, Rex Brady, and Larry Welch messed with his corpse!

5. Class Dismissed…in Puerto Rico! – I don’t remember having environmental field trips in high school. But our lucky Salem High gang traveled to Puerto Rico to study the earth. They lived on mangoes, coconuts, and plenty of adventure. These adventures consisted of Shawn D climbing mountains and swimming in caves to have Nicole Walker’s dad return Alice Horton’s stolen ruby. We saw the gang wear cute swimsuits and share steamy scenes, one in which Mimi’s nerdy boyfriend, Kevin Lambert, took his shirt off to reveal his gorgeous six-pack. We hardly saw them study.

4. Face off – Philip, at that time played by Kyle Brandt, lost his leg during military duty, so Victor bought him a new one. Thank goodness for Kiriakis money, because Victor also got Philip a new face with a face transplant! Of course, no one recognized new-Philip, even though he had Jay Johnson’s face, the actor that played Philip before Kyle Brandt!

2. “Kristen’s mean, mean, mean.” – In an effort to help his foster daughter, Kristen Blake, Stefano, dressed as Elvis Presley and drugged up Susan Banks. She had in-vitro using Stefano’s sperm and her egg. She had an uncanny resemblance to Kristen and locked Susan and Marlena Evans in the secret room while she impersonated Kristen, who had been using padding to fake her pregnancy to get John Black back. While Susan agreed to sell her the child once it was born, she returned to claim her baby, whom she named Elvis Jr. because she thought The King was the one who impregnated her. This storyline was filled with many switcheroos, lots of “mean mean mean” name-calling, and who could forget Susan’s siblings Sister Mary Moira, Thomas, and Penelope – who also looked like Kristen!

1. Will the real Tony DiMera please stand up? – What is it with Days of our Lives and islands as the harvest of ‘WTF’ moments? The number one “huh?” story in this article is Tony DiMera being left for over 20 years on a paradise island by Andre DiMera. Tony frolicked with beautiful young women but couldn’t escape no matter what. That is until of course, John and Marlena found him. I often wondered what it’d be like to have a twin sister, but talk about convenience when it comes to having an evil ‘twin-cousin’!

Days of our Lives Saturday Teaser Poll: Who Doesn't Approve?

Days of our Lives’ Alison Sweeny on The Bonnie Hunt Show 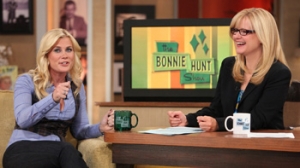