Prison-mates.
On the unnamed island, Rafe and Shane overpowered the guards and escaped in a flash of a second while Anna tried to leave her hospital room only to come into contact with somebody she seems to recognize. I wish it was Tony but it could be one of Stefano’s henchmen. Give us your thoughts on whether or not you think it was Tony or somebody else in Soaps.com’s forums.

No Love Triangle?
Even though she has good reason, Caroline’s reaction to Victor marrying the woman who tried to kill his daughter-in-law annoyed me. Almost-pure-as-the-driven-snow Caroline isn’t good for Victor anyway but that didn’t stop the little green monster from rearing its head when she spotted adorable Vic and Mags cozying up together.

Alice Tribute.
I can’t help but feel a little sad for poor Alice who was all but ignored for the past few years up until her family learned she was dying. I’d have loved if there had been more mentions of her other than the last few months.

After yelling at Stefano for assuming he knew what was important to her, Kate went by Alice’s with flowers and was stomped all over by nutso and inhospitable Laura while she tried to catch up with Bill. I think Laura would have treated Kate this way even if Alice wasn’t dying. Bill reminded her Alice wouldn’t have judged and suddenly Laura said, "Maybe we should all take a page out of her book." All? Everyone else was behaving themselves. I wanted Kate to say, "No Laura, just you, dear." What was with Laura hanging on Bill that way as though they were an item! Clearly she’s as nuts as ever. I hope we don’t see too many scenes with her, though I like the Bill recast.

Kate disguised herself as Madeline in order to get that sacred videotape from Maddie’s safe deposit box. She was almost caught and what’s more exciting is that she’s about to discover an envelope full of goodies. I’m still intrigued.

Amidst the tribute, the writers have thrown Maggie’s Myasthenia Gravis storyline to the wolves by having her suddenly go into remission. Great news but a little too neatly tied up for moi.

Kayla returned and called Stephanie on her desperation with Nathan. Steph pulled a Chloe and blamed Melanie. I’m taking some deep breaths and counting to ten.

The Younger Crew.
They’ve been gone so long, I’d forgotten about them. Chad and his rents droned on about keeping him away from Salem, Gabi decided to let bygones be bygones with Mia and Chad learned Mia still loves him. While Will is slowly becoming Stefano’s pal, ex-Will Horton, Dylan Patton, was interviewed by Mario Rocchetta. Feel free to read! If you’ve already done so, you may want to make a trek over to Soap Opera Fan to check out Matty’s DOOL Musings.

Last thought? I miss James E. Reilly this week more than usual. I plan on drowning my misery with a pool and hot tub party. 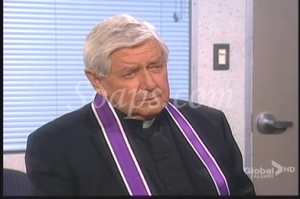 While half of Salem was taking Maggie’s ‘How To Be At Your Busybody Best’ course, the other half was preparing for Alice’s death. Let’s dive right in.

Would killing them off be better?
Carly badgered Chloe until even I wanted to help keep her betrayal a secret. Father Matt refused to marry Chloe and Daniel because of her lies and Chloe lied to Daniel, stating the reason was something to do with annulment issues or “pertaining to religious law.” Then, as usual Chloe blamed Carly for everything. I’m so sick to death of these three and this insipid storyline. Are we supposed to believe that Daniel would not demand answers from the deceitful opera diva and that he’d marry her knowing she is bloody well keeping something from him? Her lies are piling up and Daniel hasn’t even come close to finding his cojones.

Carly did a lot of eye narrowing and squinting while the hypocrite told Melanie it’s wrong to rush into a relationship. But it’s okay for Miss. High and Mighty to do it with Bo.

Drugging the ex-druggie.
Baker made a good point this week when he told Nicole that EJ wasn’t too brilliant if he didn’t even know his wife was faking her pregnancy for six months. If he couldn’t figure that out, how is Baker supposed to be concerned he’ll figure out Nicole’s part in this mess? I felt for Brady who in the midst of trying to clear Arianna’s name, wound up drugged and in the hospital in about five seconds flat. He makes a funny drunk. While Nicole almost spilled that she is to blame and she really is Ari doubted Brady’s claims of being set up. I’ve lost count. How many times is it that Bradianna has broken up?

Free Ride.
Sami thanked EJ for paying for the cost of the contractor to come fix the pipe damage in Marlena’s townhouse. I was embarrassed for her. Why didn’t she pay for it herself? No cash flow to take care of mummy’s townhouse herself? It makes one wonder if that’s why she’s living in the mansion. For a free ride. Hey, I’m just calling it how the writers want me to see it. Julie got on her back about living with the enemy, causing Sami to defend her actions and EJ’s um… honour. Though Julie’s assessment of the situation was accurate, I actually felt bad for Sami, who has always felt so misunderstood and alone. Vote on why Sami moved into Casa DiMera!

Days of our Lives Saturday Teaser Poll: Who Doesn't Approve?