Tad and Chad.
I had forgotten that "T" used to be called Tad until Chad showed up in Salem. Tad found Madeline to be sexy but Will couldn’t think of her that way. Because he’s gay? Sorry – just my theory - my wish - that he’s gay spilling out. At any rate, the Kate and Madeline secret is still getting a little airtime, though probably not enough to generate much interest with people. I love Stake and the storyline especially considering it’s not a love triangle or a baby storyline.

I am putting Hope first.
Jennifer’s return to Salem was the highlight of my week. She was alone, because Matthew Ashford is in Toronto doing Mamma Mia!. Jennifer and Hope found Bo’s divorce petition because Bo, who told Maggie he was putting Hope first didn’t bother to hide it. Though she must have seen it coming, she was still devastated twice in the same day. I got a chuckle out of Jennifer wondering to Hope if there was a baseball bat around the house she could use on Bo! Ciara told Theo her mommy was hugging a strange man, which likely will come back to Hope at some point.

When Nathan visited Alice she thought he was Tom, however, Maggie told Marie Horton, Alice’s daughter, that Alice had no recognition trouble. I gather she’s just very ill and has her moments. I assume Julie and Doug or a nurse has been taking care of Alice though it hasn’t been mentioned. What a great treat to see the old set and I hope we see it again someday.

Showdown.
Ejole had a showdown on the pier. Nic accused him of never being as happy as when he was with her and Sydney, which he found delusional. Course he was uber happy but won’t admit it. It seemed to me that somewhere in the midst of the arguing that they were sharing a moment. Man-handling seems to stimulate him. For a few bizarre moments I thought they’d kiss.

Not a lot happened this week but there were a few moments that tissues came quite in handy. The next few weeks will be very similar but let’s put the tissues away while we head into the sunny and hot weekend! Feel free to leave comments about your thoughts on the show this week and we’ll dish again next week. 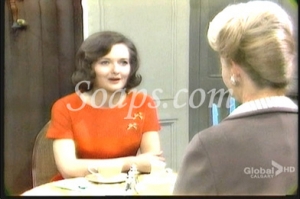 Credit: Did you think they'd kiss, too? (Soaps.com)

Yesterday Matt of Matt’s DOOL Musings and I admitted to one another that we couldn’t remember what went down this week. Not much happened. We learned Alice is dying and some other things happened. The column has been a work in progress all week, thankfully. Let’s see what else I can add to it.

Island prisoners.
Still on the island, Rafe and Shane staged a mock fight in order to find out where the guard towers were. They’ll escape sometime this month, but will Rafe be any wiser for going there? It doesn’t look like he’s coming back with the name of the Sydnapper. At least Shane will reunite with Kimberly.

Dumped his arse.
DA Woods learned from Brady and Nicole that there was a hitch in Ari’s so called solid alibi, but with EJ and Brady on the case, I’ve no concerns they’ll soon learn the truth. Sweet Gabi overreacted to a Bricole hug so Brady had to admit it to Ari, who promptly dumped his arse in her sensitive state. Take our poll! Should Ari have dumped Brady? Melanie tried to give Ari an alibi, which was really sweet, and then she tore a strip off BFF Brady for dumping her friend. Victor’s Falls honeymoon was cut short so he could be with Brady and give him a money clip to show his love. The hotel room looked suspiciously like the Kiriakis mansion.

Zzzzzzzzzzz.
A shaken Carly admitted to Mel she and Chloe were arguing before Chloe saved her life by taking her place and falling down several flights in an elevator. Melanie focused on what they were arguing about like a good busybody would do but Carly shut her down. I was impressed with Carly telling Chloe to come clean if for nothing else because this is damaging to her psyche. Not to mention, the longer she waits the worse the fallout will be and the more comatose DOOL viewers will become.

I’m not pregnant.
Thankfully, this storyline is over. I was a little confused with Stephanie taking the morning after pill. I thought she was possibly already pregnant since she threw away her birth control pills four days previous and I assume had sex in that time but alas I remembered that in Salem four days is maybe one or two days. She took a pregnancy test and learned she’s not pregnant and Stathan seem to have grown closer as a result. Lucky for Steph it also put a nice rift between Nathan and Maggie’s star busybody pupil Melanie.

Dizzying kiss.
Poor Sami still concerned about her children’s safety after her terrible ordeal with the Sydnapping, allowed EJ to help relax her. She became hot and bothered at the same time and kissed him. He must be a good kisser because it caused her to huff, puff, heave, wheeze and gasp for air as though she was running a marathon. It scared her as usual, so she raced upstairs in her purple argyle leotards circa 1986 and ridiculously high heeled boots, while EJ merely sat motionless and stared blankly.

Days of our Lives Saturday Teaser Poll: Passed Out?