Ari spoke to her mother on the phone and we learned that her mother is unforgiving and proud. She accused Ari of disgracing the family. No wonder they’re all in Salem, far away from her! Though... dare I say it might be a trip to have her around?

Ice Cream vs Sex:
Hope told Baker that Bo traded her in for a younger model. I thought that Carly and Hope were the same age. They sure don’t look any different in age. And he didn’t trade her in. She dumped him and pushed him away, so Bo was on his own to do as he pleased. The opportunity of Carly simply presented itself, so he went with it. Hope mustn’t be aware that men move on quicker than women do. While she was spending time on tears and a pint of ice cream, Bo was out there proving his desirability. Sure, this Bope fan didn’t like the writers breaking them up but I have to admit it was well written. While I like the storyline of daytime/nighttime Hope, I am worried the writers will take it too far and get rid of Hope. One of our last vets. Ciara took mommy's wallet stash as her own treasure. Why I've no bloody clue. Considering Ciara's "stories" are being questioned, she could have shown her parents the treasure box to get off the hook. I'm guessing she's in need of some attention and acting out as she did with the theft of her headmistress' gold stars. Mommy stole them right back and Caroline gave Ciara a rosary to take her mind off her troubles. She made sure she told her grandmama and daddy that she put it under her pillow for safe keeping, which means Carly might lose it on her when she does laundry. (I'm assuming Carly does it since Hope always did.)

Questions of the week!

Where does Gus live? What’s his story?

I still want to know what happened to real romance between couples we gave a &#$% about! Last week I polled the readers, asking them to name the top characters who should leave Salem. As of today, the results are as follows:

Have a great weekend. I'll see you back here next week after I spy a little more in the hedges at Bo's place, in the cell of Rafe and Shane, at the pub and maybe over at the DiMera mansion... Feel free to check out Matty's DOOL Musings!

Credit: Grandmama to the rescue. (Soaps.com)

I was only able to spy on the goings on in Salem a mere four days this week, due to the holiday. Not much happened. I’ll put away my binoculars and get down to business of dishing.

Staycation:
Maggie and Victor spent his wedding night together flirting while poor Vivi moped around the Kiriakis manse. Vivian needed an alibi for what was about to happen with Carly, so she pressured Victor into a cheap honeymoon in Niagara Falls. He preferred a staycation, one where she stayed in her room. He was on to her and warned her that she’d better be on the up and up. I hope they’re not gone for long, because that always means more time for Samanther to return to the screen and I prefer Viv ‘n’ Vic. Better yet, Vic ‘n’ Mags.

Backfire.
Chloe finally succumbed to Vivian, but she’s a little slow. Knowing Vivian buried Carly alive, she still didn’t recognize that Vivian’s elevator plan was a murderous plot. The doe eyed dip badgered Viv, concerned that she was going too far. What did she think Aunt Vivian would do? Slap Carly on the wrist and tell her to go play in somebody else’s sandbox? Chloe’s no murderer though so we know this will backfire.

Plan B:
The Stathan storyline has been kicked up a notch by having Steph realize that Nathan’s not just a doctor but a man. They’ve both absentee fathers and Nathan opened up about how he wants better for his children. Steph decided to get herself out of a sticky situation by taking the morning after pill, AKA “Plan B,” since Plan A (trapping him) wasn’t working out for her. It actually gave me pause. Could there be a reason to root for these two after all? Even with the impending doom of Phelanie’s marriage, I felt their pillow talk brought their relationship to a new level. What are your thoughts? Care to take a poll to tell me if Steph should have taken the morning after pill?

Set up:
EJ heard a news brief from his ex that Arianna Hernandez was jailed for the Salem muggings. He thought it was rubbish and decided to take her case on. I found it strange that nobody mentioned that he’s one of the victims. Really strange. EJ suspected Nicole had something to do with Arianna’s set up and told each of the ladies so. It was fun to see EJ and Nicole spar. 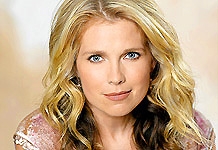