Waffling.
Ejami are already furthering their storyline by finally kissing. I missed out because I was frolicking in my pool during last week’s 3 day holiday. Sami sent EJ mixed signals by kissing him and reminding him of her love for the G-man. In a way it makes me feel for EJ, but it’s also borderline sick to write a story where the female falls for the man who has once again screwed her over, royally. I’m not sure what the writers get out of this but it’s past getting old. The waffling in writing and repeated dialogue between Ejami makes me long to be in my pool everyday at 3:00.

The wedding was the highlight of the week with all Victor’s ex-wives in attendance. Whose brilliant idea was this? Kate and Nicole’s shared giggle over Vivian was delicious, Carly and Kate gossiping about poor Chloe was a hoot, but my heart broke for poor Vivian, who didn’t even have Gus to console her when nobody would speak to her on her own wedding day. She rose above it and tried to throw the bouquet to Chloe, but Carly caught it, just as Hope came into the room. This can’t bode well for Beauregard.

People of Salem must be taught at an early age how to become a good busybody. There must be courses, essays, and final examinations, with Maggie as head mistress. She got her knickers in a twist after assuming correctly that "boneheaded" Victor was marrying Vivian in order to protect his family. She seems to see his good side where not many others do. They’re absolutely adorable and Maggie’s scolding of Victor for hurting his bride’s feelings was spot on and charming. Poor Vivi’s dense to have thought Victor cared for her. Though I’m enjoying Maggie and Victor, I’m not happy we’re dealing with yet another love triangle.

Another boneheaded move:
Stephanie and Nathan popped their heads into the pub for a belly full of clam chowder and a discussion about how he has turned down a research fellowship at Johns Hopkins. To. Stay. In. Salem. With. Her. If I didn’t care about Nathan before, this just pushed me over the edge. If Stephanie really cared for him, she would have told him he needed to have his head examined. 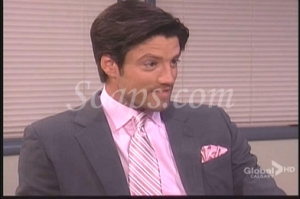 Due to the pre-emption of DOOL Thursday, the episode I recapped for Friday will be posted Monday. However, my column may make more sense if you read Monday’s update, here. Feel free to do so or simply to read on.

It’s sad that there are no longer couples to root for. I could care less if any of the couples in Salem make a go of it. Are the storylines simply too plot driven instead of character driven? Whatever the reason, it’s a bit depressing. So is the fact that we’re on the edge of a new love triangle with Maggie, Victor and Vivian, and a new ‘who’s yo daddy’ storyline with Daniel, Chloe and Philly. Why, it’s a DOOL writer’s wet dream!

Thicky D:
I’ve had enough of the whiny conversations, the flashbacks to sex with Philly, the admissions to Daniel of guilt over ‘something’, and enough of the discussing of personal issues in public. I wouldn’t be surprised if Chloe spontaneously combusted soon.

He may be the best doctor Salem has seen but outside the hospital, Daniel’s pretty thick. He’s only enabling Chloe’s insecurities by rushing marriage. How embarrassing for Chloe was his faux pas for stealing Vivian and Victor’s thunder by announcing their own impending nuptials at their reception – and without even consulting the bride-to-be?

Me Tarzan, you Zombie Jane:
Carly, along with Maggie and Melanie, need to join a busybody support group. Carly learned Chloe’s ugly truth and decided her own life didn’t have enough high drama in it, so gave Chloe a few glaring looks and tried pressuring Chloe into spilling her secret, before hearing from Kate that Chloe has cheated on Lucas and ‘forced’ Brady into drugs (shakes head). Take my ‘what would you rather’ poll, where I ask If you’d rather put up with icy stares or just tell Daniel the truth!

Carly had to remind butthead Bo that if he killed Vivian it would be murder. She ought to know. And besides, she said, “You’ve a daughter to think about.” (She must have forgotten he has two more kids.) I thought I was ready for Bo’s return and thought I cared about Hope getting her man back but after witnessing his ‘Me Tarzan, you Jane’ persona with Carly, I’m cured.

Rafe’s arrest was an eye-roller. If the big bad FBI agent wanted to harm or do worse to Anna, he wouldn’t have saved her life and stood over her for hours on end, begging her to talk! The saving grace, we’re to assume, is that he wound up with a face from the past, Shane Donovan, as a cell mate. Before my time and if he’s before your time, feel free to read about Shane Donovan here. I don’t know the point in bringing back this character for a few days, nor do I know what country this is. Why hasn’t the show made note of it each time these scenes air?

Red Dogs:
Brady wondered why Ari didn’t fess up to being in a gang called “Red Dogs.” Really? Not only does it take years to get to know somebody, but why would Ari confess to being in a gang with a name some pre-schooler picked out? Jail-bird Ari is more exciting to me and how much fun is it that pretty-in-pink EJ DiMera wound up as her lawyer? This kicks this storyline up a few notches and is already working toward making me care for “Clifford The Big Red Dog,” Arianna. My only hope is that this isn’t a plot to further the Ejami storyline by making Samanther jealous of the time EJ spends with Arianna. 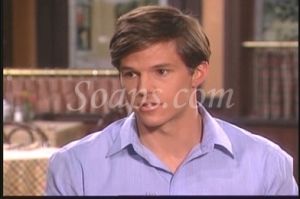