Take the time to write the beginning of a love story.
I dislike this storyline intensely. You can’t build a great love story on a few dates and a stolen kiss. Longing to be with somebody comes from a deeper place in our hearts than that. Nathan and Melanie weren’t ever a couple and though they both say they’re over each other, with Chloe and Philly having sex, you know there’s a pregnancy on the way, thanks to Philly’s little swimmers. The truth will come out that she and Philly did the deed and it’ll be open season for Nathan to go after Mel. But will this be put on hold by Stephanie becoming pregnant? Nathan’s a Horton and they always stand by their women, so that could complicate things further. Still, I’m not sure I care. Even if the show took the time to write the whole love story, it still wouldn’t matter to me. I still don’t know Nathan enough to care about what happens to him and am not a Stephanie fan. The only saving grace of this story is that Mel’s street smarts kicked in and she knows Stephanie’s trying to trap Nathan. Feel free to vote on whether or not Stephanie should trap Nathan! I don’t know about you but I think she’s worth more than that and deserves somebody who loves only her.

What did Chloe ever do to Mel?
The writers have given Melanie no reason to dislike Chloe or think that she’s bad for her father. Chloe has never given her any reason to think this. The writers have thrown us in the middle of a storyline – once again, instead of writing the whole story from beginning to end. Somebody needs to tell Mel that her father’s marriage is none of her business. Besides, she barely knows him! Whatever happened to taking it slow and getting to know somebody before you pull a Maggie Horton?

Sex addict? What?!
Another hole in the storyline is how we’re to believe that Daniel hasn’t demanded Chloe tell him what the *&%$#@ she did that he’d find unforgivable. Did zombie Carly eat his brains? He truly merely blames himself for Chloe’s insecurity? Oy. How about Nathan’s sex-addiction accusation! Just because Chloe cheated on Daniel does not make her a sex addict, even if she cheated on Lucas with Daniel. She does seem to have commitment issues, perhaps from being abandoned as a child.

He's not such a bad guy!
How ironic that Will thinks this of Stefano! It’s exciting to see Will turn out bad, and I'm only finding it believable because Will's a teenager. Sure, Stefano caused all sorts of torture to the entire Brady clan for years and Will knows this but he’s a teen and who has had Sami Brady for a mother. Need I say more? At least Stefano’s right. They do need a new generation. 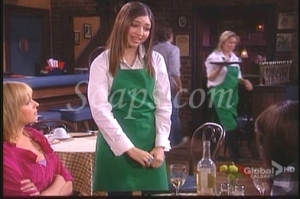 Credit: Dreaming of her next victim! (Soaps.com)

Let’s start things off with a quote from one of our fellow forum posters, “Father John,” who says, “I think Salem is a small suburb of The Twilight Zone.” It explains a lot about strange goings on in Salem all these years. Let’s spy on them!

Powerless.
Justin and Hope’s relationship was kicked up a notch this week when Hope admitted to having feelings for her cousin-in-law, though she’s not ready to do anything with these feelings just yet. Kristian Alfonso can sure play vulnerable. She feels powerless since breaking up with Bo, which made me feel for her. I wouldn’t call what she’s doing ‘female empowerment’, yet I’m not sure I’d call her weak. She’s just struggling with devastation over the state of her relationship with Bo, which finally made me want them together again. Though I like the storyline, it does feed into the consistent writing of females in Salem. Part of me still thinks Princess Gina or another personality could be inside her. Check out this video of Hope fighting to destroy Princess Gina in our recent “Top WTF Moments in DOOL.”

Crossing the line.
Even if I feel Brady loves her, Nicole once again crossed a line and one I don’t think he’ll forgive her for. Still, I have a hard time being worried about what’ll become of Arianna, considering it’s Salem and the cops are… [Insert laughter here.] Maybe with the exception of daytime Hope. Kinsey returned for a brief moment to interact with Nicole and Ari and boy did it remind me of the good times Nicole had with Jan Britney Spears! Give me more of the brat that is Kinsey!

Looming over their heads.
Sami pointed out to Brady she’d go back to Rafe if he wanted her, but where does that leave Elvis? I’m pretty certain that Sami would never stay with EJ if she learned the truth. Though the main tie they have to each other is their kids which provides lots of tedium, the poker game was a lot of fun to watch. Even though they made a pretty picture as a family at the game, I don’t see how it can work with this looming over their heads.

Two dimensional Rafe.
Rafe’s temper got the better of him while questioning Anna, making me jump out of my seat. I liked seeing this side of him. He’s usually written as one-dimensional which causes people to find him a bore. It’s easier to relate to somebody with a range of emotion, non? While Anna did bring this upon herself – working with a known mobster, I can’t help feel sorry for her. She wouldn’t have done this if it weren’t for grieving over Tony, who meant everything to her. When we grieve, we aren’t ourselves. I don’t think she deserved to be poisoned but she does deserve jail time. Hey, at least Stefano got his cajones back!

Days of our Lives Saturday Teaser Poll: Vivian and Victor 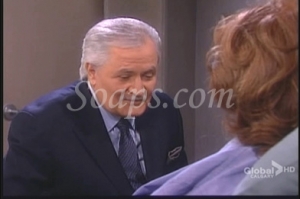