Those Salem teens sure know how to have a good time.
Will, (the origin of his name is 'knows how to spend his Friday nights') spent too much time this week worrying about what grandma Kate and Chad’s mother have in common and then spent some more time bickering with his mother – in case she forgot about how pissed off he is with her. He even went so far to say he hates both her and EJ. Yet he loves his gram grams. Boggles the mind. Though I’m on Will’s side, I’m also a little tired of the back and forth. Matt, (of Matty’s DOOL Musings,) and I have been pondering on whether or not the show is preparing to write Will as gay. Maybe it’s wishful thinking, or maybe we’re analyzing things too much. Vote on your thoughts of a possible gay storyline with Will. We were treated to more of EJ and Sami droning on about how much of a good parent the other was this week. I swear it’s all the writers have for these two to discuss is the kids. That puts me off but thankfully; I found solace in EJ once again showing that vulnerable side to himself when he admitted to Sami that he worried about how Johnny would perceive his father as the bad guy, once he learns his daddy’s a mobster. There are hidden depths to EJ that we don’t get treated to with many other characters. Why is that?

Zzzz.
Even though all these two do is have sex, they’re still as about as exciting as watching paint dry. These two bumbling idiots actually take calls on the cell phones that they keep at their bedsides, while in bed naked, together. That’ll be the day I ever…

Listen to your mum, Chad.
Madeline "used to selling it on the street" Peterson Woods and poor hair colour disaster victim, Woodsy, are now in agreement that Chad should stay away from the DiMera family. They were about to ship him off to Wake Forrest University but he decided, much like every dim high school student in Salem, that he’d rather stay behind and go to the local Uni. Sadly, going there has never helped the students amount to much but we all know University is really about parties and sex, right?

Bye Calliope!
I didn’t enjoy having to put up with listening to the screeching sounds of creeper Calliope this week. The way she yelled as though Rafe and Anna had considerable hearing loss issues rankled my nerves and I was glad to see the last of her. Rafe has the patient of a saint – if he hadn’t had to deal with Sami’s constant ranting while they dated, I’m sure he’d have done away with himself by week’s end. Hopefully this Sydnapping storyline can completely wrap up before June’s tribute to Alice.

If you were hiding under a rock this week and missed the 37th Annual Daytime Emmy Announcements, you can find a link within our DOOL Emmy nominee piece.

Good news! Emmy season means The Sudzies are out and ready for you to start voting! Vote on them and then head over to chat us up on Twitter @soapoperafan, and Facebook. 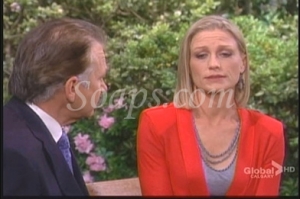 Salem Mugger.
This week Ari and Brady decided to go after the Salem Mugger, but ironically, when she was right in front of them, talking about girl power, neither saw the red flag. Carly had a run in with Hope that I’m sure Hope won’t recall, but if Carly brings it up the next time they meet, and Hope becomes confused, questions will arise. It’s interesting that Bo’s due back in Salem soon. He knows Hope better than anybody else but will he see the change in her?

The phoenix.
Nicole and Dr. Baker bumped into each other and he finally explained he pulled a Stefano DiMera to fake his own death. With a syringe full of that great stuff that makes one appear dead, of course, along with some self asphyxiation…you know…the usual. Because Nicole has the goods on him being involved with the Salem Mugger, she was able to turn him into her lackey again. He wishes he’d stayed “dead.” They’re now gathering evidence to put Arianna behind bars as the Salem Mugger.

Where’s Waldo?
I realize Daniel needs a friend to discuss his marital issues but think it’d be better for all involved if he’d keep Carly out of the loop and open up to somebody like Brady, who isn’t involved. I get that Melanie’s overjoyed that she has a family now but it’s not believable that she’d be looking all over the hospital each time she’s there, looking for her dad. Nor would she be calling his cell every few minutes wondering if he’s alright – considering she has no rationale to do so. Her acting is impeccable but the writers still haven’t found her feisty side. Even at the chance to take Vivian down a peg, when her mother-in-law to be invited them to dinner, she chose to go searching for Waldo – I mean Daniel, instead of give Vivian a piece of her mind. Sigh. Kudos to Chloe, who knew better than to get involved with Vivian and for admitting that she’s to blame for getting a piece of Philly. Not Carly. I wish other Salemites would admit their faults as Chloe has.

New couple?
Vivian’s doing more than squawking about there being not enough scones in Salem. She’s trying to plan the wedding of the century, attempting to convince Chloe to work with her to get rid of Carly, and now she’s got something else on her plate. Her man is interested in Maggie! Victor and Maggie shared several close moments in her hospital room, while he pushed Vivian away. This storyline also interests me because I’m not sure how Victor will get out of marrying Vivian. He is marrying Vivian in order to ensure she keeps her end of the bargain to stay away from Carly, but if things keep heating up between him and Maggie, he might have to face a choice between family and Mag Mags. That gets my attention. 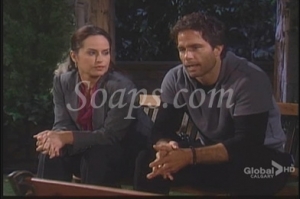