Confusion.
Melanie told Carly that sometimes it appears that Chloe's judging her. I've never seen it. These two have never really even had a conversation before. Carly didn’t see it either. Do the writers realize that this has never happened? Is this the writer’s way of setting things up for Melanie to learn that her husband gave Chloe a ride? Will Chloe become pregnant? Will I ever become interested in this bland storyline? It’s saving grace is the acting from Molly and Philip.

Flashback from 1980.
Stephanie put on the pressure for Philly to tell her why he and his hair were getting drunk. Purely self-serving. If Philly and Mel break up, Nathan would be able to go after his true love. Stephanie decided to put an end to Nathan’s youth by throwing away her birth control pills in a 1980’s flashback gesture and having sex with him. She also professed her love for the resident. He said nothing but wanted round two. Nathan’s a bit of a pig for having sex with her while he’s in love with another and a bit stupid for trusting her to use her pills and not add a condom to the mix, but we’re in Salem, and remember, they may have Cheerios, they may have Midol, but screw you if you want a condom to protect you from pregnancy and sexually transmitted disease. They don’t have those. Stephanie also gets the award for the cheesiest line ever in a soap when she asked Nathan, "Voulez-vous coucher avec moi ce soir?" (Do you want to sleep with me tonight?) Ugh. Lactose intolerant or not, I almost threw up. Vote to tell us your thoughts on this corny line!

Pit Bull.
Nicole and Gabi were a lot of fun together. They’ve great chemistry and I’ve not been much of a Gabi fan, but she was like a little pit bull. My favourite quote from Nicole was when she told Gabi not to take out her anger on a defenseless martini!

Torture.
I never thought I’d see the day that Stefano had a pipe burst in Marlena’s townhome, therefore forcing Sami to stay at the DiMera manse. EJ helped things along by offering to help Sami make Kate’s life miserable, but the story has been told far too often. While Sami was tortured after yet another knock down drag out with Will, EJ was on hand to console her while she flashed back to making out with him. Instead of making her son Will her priority, she decided to swim with the enemy and massage his fake tan, which led to an intimate moment. Since he didn’t recall the earlier kiss, Sami decided to remind him of what it was like. Ejamis everywhere danced and cheered while Safe fans tossed their cookies. If Will catches this display there will be no dancing!

Brownies anyone?
Kate hasn’t mentioned her past with Madeline for eons and suddenly she’s on edge about it and just happened to tuck a photo of herself with "Maddie" in Will’s homework. He showed Chad and they realized something was up. What I don’t get is why Stefano doesn’t just do away with Madeline the way he and Kate do with anybody else who gets in their way? They could combine their talents. Implant a chip in a pan of brownies and Maddie can chow down.

As you can see, I felt the week was bland. Perhaps the good stuff is being held back for the upcoming scenes for Alice's Funeral. Either way it has me wishing for days gone by. 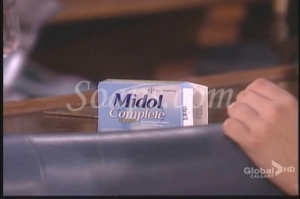 The show doesn’t have the same feel. Fans are complaining of the ‘lazy writing’ and I’m completely befuddled by what’s going down in Salem. It feels as though the writers are focusing on something else, because something is off. It has the feel of a whole different show and is very bland. As Matt (Purvis, Matty’s Musings on SoapOperaFan) says – and I agree with this, “The show doesn’t know how to be absurd in an interesting way anymore.” Case in point. Read Rolla Bahsous’ top ten WTF moments of DOOL if you miss out on the show when it was entertaining best. No soap opera is going to be perfect for any of us but at the moment, I’m simply not sure where we are or where they’re going with anything.

Mood swings.
Hope surprised me by being honest with Baker about her plans for world domination or at least male domination with a kinky twist for branding. Some women get upset when they divorce but Hope decides to make the entire male population pay. She turned on the tears with Baker to get him to stick around. Very bi-polar. I’m not sure about anything with this storyline at this point. I’ll keep enjoying them working side by side, and hope for the best.

Branding.
After Brady was mugged and branded by police woman Hope, Nicole took care of him, thus causing him to realize that she really does care about him. I don’t know why he ever doubted that. Arianna’s week was ruined by PMS but her cramps and bloating disappeared with a little product placement. I’d rather see Nicole on the job more than running after Brady. Watching women chase men is not my idea of entertainment. It reeks of Austin and Sami back in the day. Nic Nic, move on, honey.

Voice of an angel Calliope.
Rafe found a link to Anna’s past in ditzy Calliope Jones, and bartered with her. Rafe would help her and Eugene with their tax fraud and whiny Calliope would get Anna to admit she wasn’t responsible for the Sydnapping alone. Calliope’s very kind and sweet as can be but is one of the worst characters I’ve seen aside from Willow Stark. Just a sample of Calliope’s brilliance: “I happen to know she’s going to get a two hour stone massage and she’s going to be there quite some time.” Uh huh? Like two hours? Anna’s just as ditzy and when prompted with a little alcohol, spilled her whole sordid Sydnapping story, stopping short of telling her so called BFF who she hasn’t seen in two decades that EJ was behind it all. I was a little surprised that drunken Anna claimed to have no regret for her part in the Sydnapping. She hurt innocent people! I thought she should have felt a little remorse at least for those who were blameless and got hurt.

Pulled a “Sami.”
Chloe went ballistic on Carly and Daniel, confronting them about fooling around under the sheets. I’ve never seen Chloe show emotion. If she keeps opening up her big mouth in public about doing the deed, Nathan won’t be the only one to learn their dirty little secret. She isn’t working because she wants to focus on her husband but she’s focusing far too much and not in a healthy way. She reminds me of Sami. Get a job, woman! 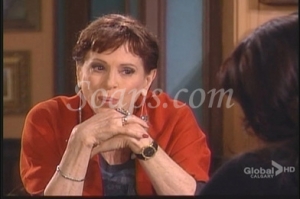