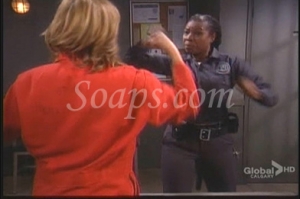 The theme this week was ‘the brush off’. Sami gave it to Rafe, Hope gave it to Justin, Nathan gave it to Stephanie, and Melanie gave it to Nathan. Another theme was the ‘ultimatum’. Bo gave one to Victor and in turn, Victor gave the same to Vivian. Let’s break it down to what popped out the most for me this week.

Vendetta Over? Nah!
I love Vivian but the vendetta is over for me and I was glad and for once, absolutely stunned when Victor gave her an ultimatum and popped the question. He proved to Bo he really does care about family and sacrificed himself to Viv. Is that why Calliope Jones is returning to Salem? To help plan the wedding? Does that matter? The big question is what kind of mind games Vivi has in store for Carly.

The Ick Factor.
The town pump, AkA Murderess Dr. Carly Manning is miraculously free from attempting to kill Vivian and stealing a cop’s gun. Her beau – vigilante Beau threatened to kill Vivian if Victor didn’t rein her in. I can’t recall him having been this passionate about Hope, which is a little disappointing, surprising and difficult to believe, considering his past with Hope. There’s an ick factor when watching Barly do the deed, especially when she starts chatting about the old bat, Vivian. Vote on Bope vs Barly.

I love Adrienne and Judi Evans but am puzzled by Adrienne’s appearance and how it fits in. Adrienne flew to Salem at matchmaking Hope’s behest, only to learn her husband or is it ex-husband, is in love with Hope. Very awkward scenes and not really sure what it’s all for. Is this filler? Do we have time for filler while soaps are a dying genre? Maybe there’s a story brewing and patience is the order of the day.

Is it 1950? The Little Woman Rant.
Rafe wants to take care of the little woman and her growing brood, reminding Sami she can’t get a job with the FBI because of all of her run ins with the law. EJ too wants to take care of the little woman but for more sinister reasons. What’s with these men in Salem? And the women? Sami actually asked Arianna if she was planning on quitting work when Bradianna married. What the hell for and what the hell year is this? Why would she quit her job just because she’s getting hitched? And what is going on with Sami that she would ask Rafe to take a break and a few hours or days later recant her decision? Immaturity? Didn’t like what Rafe had to say about the FBI job so she took her Barbie dolls and ran home? Has she started looking for another job or was that all for show?

Real feelings or phony baloney?
Considering EJ’s evil plan to make Sami’s life hell, and bearing in mind Lexi keeps pressuring him to admit he loves Sami, is it possible Sydnapping EJ will confess to feeling something for Sami to his sister only in order to throw everyone off his trail so the rest of his cruel plan won’t go south?

Second Best.
Mrs. Melanie Kiriakis did a very Jennifer Horton Devereaux thing and lied to Nathan about her feelings for him. (Psst read up on Jennifer’s return to Salem!) Didn’t Nathan dump Mel because she had feelings for Philly? Just sayin’. Now that she brushed him off, he’s going with second choice Stephanie. Not a very Horton thing to do. Will Steph let him treat her this way?

I like the new side of nosy Maggie this week. Instead of spilling Melanie’s marital issues to Hope, all Maggie said was she has grown fond of Philip and hopes things work out well. When Hope asked why it wouldn’t, Maggie just wished love could be simple. (It is, when you live outside of Salem.)

Art Imitates Life!
What perfect timing does DOOL have? I felt as though I was watching the celebrity news when Joslyn James, I mean, Anna, threatened Governor Jim Ford that she’d use their sext messages, photos and videos of them in various sex acts, using sex toys, unless he gave Nicole a pardon. Even though he was drugged up, he seemed to recall what a naughty boy he had been and asked for a repeat performance before she hightailed it out of Salem.

Philly’s becoming a confidant for the ladies of Salem. First Chloe and now Stephanie. Is that all he’s becoming?

Repetition.
Nicole left prison after she and Lois (I’ll miss Lois!) did that cute little happy dance and broke, jumped on a flight and interrupted Bradianna’s wedding just as Ari’s pearl necklace broke, signifying a bad omen. Um, didn’t some of this happen last month during Melanie’s wedding?
If that wasn’t bad enough, Arianna was forced to wear that Halloween costume while Brady was the Good Humor man dressed all in white…I’d have loved to see them keep the bathing suits on.

Isn’t that the point of a tropical island wedding?

Only in Soaps.
Then, Fay, who is almost as broke as Nicole, instead of wiring cash to her daughter, flew down to Santo Domingo with the wad of cash, borrowed from her friend Marge. And if you believed that, you might also believe that Nicole’s going to lie back and let Brady go off with Arianna and live happily ever after.

Chant with me. "We believe, we believe!" Have a fantastic weekend, everybody and I’ll see you this week on the DOOL message boards in our live day before spoiler threads!