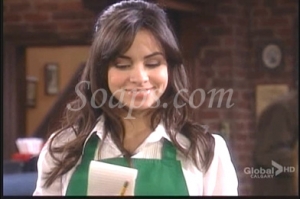 The Sydnapping’s over. I’m popping the cork on this bottle of champers. Join me in a drink to celebrate. The writer’s favour writing about kidnapping, killing off babies, and they love to spin a couple’s triangle story. It gets old fast and the character development somehow gets back-burnered during it all. If I have to sit through one more baby storyline I think I’ll scream.

How about those recycled love triangles? Once upon a time, Shawn, Belle and Philip were in a love triangle storyline. There was a lot of history between these three, so by the time the triangle story was written we cared about them and about the story. We saw Belle being torn between loving them both, similar to the way we see the writers of today writing Melanie being torn between Philip and Nathan. The problem is, that Nathan’s too new for anyone to care about, and Melanie and Nathan weren’t in love before she hooked up with Philly, so why the triangle? Though Stephanie deliberately kept Melanie’s letter from Nathan, this hasn’t turned her into a bad girl for me. She’s basically a good girl whose insecurities about where Nathan’s heart lies made her keep the letter. She felt guilty about it all and was spot on when she told Melanie to remember she’s Mrs. Kiriakis now and should let Nathan go. Doesn’t Philip deserve a wife who adores only him?

The main attraction of this week is Nicole’s return, and what a return. She’s no longer mooning over EJ. She found her backbone again and beat down her cell mate, Tiffany, in a show of dominance. I could barely move to recap each moment as it happened, so riveted to the action I was. More on Nicole further on.

First I need to blow off some steam. If you’re going to fill Alice Horton’s shoes with Maggie, she’s going to have to have a lot more wisdom than the stinky advice she gave Daniel. From my recap: “Maggie reminds him Melanie already liked and respected him. Things have simply changed. Daniel finds this a wealth of wisdom …” He. Found. This. A. Wealth. Of. Wisdom. Oy.

They’re perfect for one another. Stefano had no qualms about asking Kate straight out why she hasn’t attempted to murder her newest daughter-in-law. Kate’s trying to put the rather unpleasantness of her attempting to murder Chloe behind her, she told him, sulking. Poor psycho Kate. The truth is, she hasn’t found out about Melanie’s feelings for Nathan – yet. I don’t look forward to Kate discovering this or that Mia’s playing Will. Who is going to help her get the leuko systine this time?

As I pointed out in my last column, the dynamics have been changing between Melanie/Philly/Nathan and we can see the chemistry has slipped, between Melanie and Philip in a big way. In the beginning, they were fresh – like any new couple – and exciting. Stephanie and Philly were even like that for five minutes, and now that Mel and Philly have married, the chemistry seems to have disappeared. Of course, that could change if the writing does. Maybe it’s just a result of Melanie being in the hospital. Since she has been there, she’s been a tortured soul and with this, has reverted to a childlike resemblance of the old Melanie.

In the forums, many are asking why people dislike Carly so. While we love Crystal Chappell, not everyone’s hot for Carly. Those of her who watched her some 16 years back find her loveable but I find her quite the opposite. I’m not even sure she likes herself. First of all, she is being written as the town pariah in her return, no matter what she was in the past. She now has another past during her 16 year absence from the show. She was a victim of a cruel abusive husband and kept her secret in order to protect both Daniel and Melanie. She’s honorable and caring. The fact that she is with Bo doesn’t irk me because I liked Bope. It irks me because their relationship is comatose inducing. Bo without Hope is a shadow of a man. He’s not likeable on his own. He’s not a good cop, he’s not a smart character, there’s nothing that interests me about him unless he’s with Hope and his children.

Matt (Purvis, of Matty’s DOOL Musings) coined the name Zombie Carly for good reason. I felt for her when she burst out into tears in front of Dr. Dan last week, for about two minutes but other than that, I find her to be in a perpetual zombie-like state as I have with Chloe and Stephanie. You recognize the blank stares, lack of reaction, dragging their left leg behind them when they walk, the ghoulish-grey skin… I’m depending on the writers to come up with a way to make me like these characters, and no, that doesn’t mean I need to see them have crying jags like Sami.

Brianna, Bradianna, whatever. Another less than exciting couple. I’ve got nothing invested in this couple. It’s impossible to enjoy a couple who breaks up as much as these two do, much like Sami and Rafe. What’s there for a fan to hold on to? I can’t trust that Bradianna will stay together so why invest? I can’t trust Safe will stay together so again, why invest? I simply can’t. But this is about Brady, who in a mad moment asked his uber insecure, off and on again girlfriend Arianna to marry him. We didn’t have time to digest the first proposal when he proposed a second time – for no apparent reason- and she blew every last ounce of respect I had for her out the window for declining the first time when she accepted the second proposal. Good reason not to do coke. And Caroline doesn’t give a rat's arse that 15 year old Gabi’s working at her pub bar? What’s wrong with these Salemites? The only reason I kept my sanity watching this week was the blessed event of Nicole’s return.

Nicole’s one of my favorite characters and a fine actress. I longed for Nic Nic to stop cowering to EJ all year and got a charge out of seeing her bully Tiffany. Her comment about being a DiMera "more than they know" wasn’t lost on me. She and EJ are still married. He has been too busy worrying about how to pay back his dear Samanther and old bean Rafael that he must have forgotten to file papers. I love it! It’d be perfect if Nicole found out what he did and blackmailed him.

Were you able to keep down your lunch all week after hearing so much about how EJ and Rafe both want to be Sami’s hero? Did you play a drinking game, downing a shot every time you heard the word "hero" come up or are you still working on the "I’m there for you," drinking game? I am through with this triangle that ran its course months ago and can assure you it’s not over yet. I’d really rather that these three weren’t the focus for a while and I’d love nothing more than never to see Sami shed another tear. This week EJ made it so bloody obvious that it was him who was behind the kidnapping! He should make amends with Stefano, who is the master schemer. At least we’re seeing that Rafe really is a great FBI agent. He’s really close to the truth, though I can tell you that Nicole’s going to be the one to piece at least part of it together, before Rafe will. I’d love Nicole to hold the power in her marriage to EJ. It would be amusing to see him squirm rather than see him as desperate and obsessive as Stefano was with Marlena.

It’s annoying, even though I realize that the child actors have contracts and can’t be in all of the scenes we’d like, I was still completely floored – and should be used to it by now– when Sami dumped off Syd with Caroline, the day after she got her back! This after she wailed to Rafe that she wants back every minute she missed out on with Syd. The writers make it very difficult for me to like Sami.

Speaking of the children, I felt Dylan Patton captured the essence of a teenager very well while he was with us and though I realize it takes time to feel out a new cast member, I’m still not feeling the nu-Will. Perhaps it’ll take more time, considering he hasn’t been shown that much?

That’s all I have to prattle on about today. I hope you’ve all enjoyed the champagne and that your weekend is perfection! Please feel free to leave a comment about how you felt about the show this week!

Days of our Lives Viewer Alerts!