Ex- Bonnie back as Adrienne on Days! 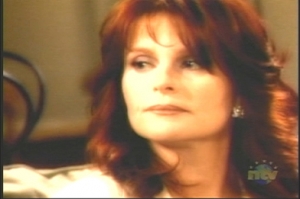 As a blonde, in one of her last scenes as hilarious 'Bonnie Lockhart'!

As most of you already have heard through Soaps.com’s Days Spoilers or through our Days Comings & Goings, Judi Evans Luciano (ex-Bonnie Lockhart) is back on canvas as Adrienne Johnson Kiriakis!

Judi portrayed the fun loving Bonnie from September 3 2003 until March 2007, when the entire Lockhart clan was written off Days. Thankfully for Judi and her fans, she was told right away that Corday had something in store for her. She was called back to reprise her old role of Adrienne and happily agreed to return! Evans was the second actress to portray 'Bonnie Lockhart', but clearly the most memorable!

Soaps.com and soap fans are chomping at the bit to have Judi back in any capacity and wish her good luck in her future scenes! We'll be watching!