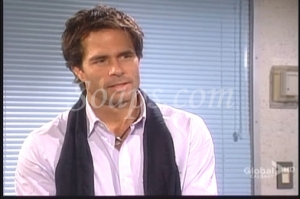 Will there be a Bricole reunion? (Soaps.com)

This week revolved around the aftermath of Melanie’s shooting and ended the Sydnapping. This week seems to be driving us into new storylines, which is a welcome change. Before we’re driven somewhere better, let’s get into where we’ve been.

When EJ drank, whined and obsessed about how difficult it was to break up Sami and Rafe, Anna reminded him that Sami’s needy. She needs a hero in her life, a man to take care of her. This sparked a new plan for EJ and he decided he’d work at being her hero, and by Friday, brought Syd home, thus ending the Sydnapping. I don’t blame Sami for keeping this secret from Rafe this time, after all that went down during the last drop. As a parent, her first concern was Syd. Anna told EJ she knew he was in love with Samanther, but he avoided the accusation. Instead of showing a weakness, he’d rather gut Sami by using Syd. That’s love for ya. DiMera love is grand.

I got a chuckle during the DiMera great room scenes. There used to be cameras all over the DiMera manse, and yet Sami and EJ discuss the Sydnapping and ransom note right there in the great room, at the top of their lungs and nobody noticed.

Many think Sami’s stupid for not learning EJ was involved in the Sydnapping but I disagree. She has no bloody way of knowing that the tosser has kidnapped her own kid, she doesn’t watch DOOL, so how is she supposed to figure out what he’s up to? I don’t think there are blatant signs that would lead her to thinking EJ’s up to anything. I wonder if it’ll stay his and Anna’s little secret.

Rafe’s suddenly coming off as a little overbearing which I gather comes from his hands being practically tied at the moment and his need to be Sami’s hero. If EJ is Sami’s hero, how will Rafe feel he fits into her life? Will it matter to him?

Maggie kept having dizzy spells and hand tremors, thus making her worry that her old condition, Myasthenia Gravis was returning. Incidentally, the actress had this in real life, causing her to quit the show in 1984. She’s been in remission for ages. I love how this didn’t stop momma bear Maggie from getting a few shots at Carly for turning Melanie’s life upside down. Part of me is grinning with glee that Carly’s getting a little comeuppance and the other part of me sees how honourable she is and what a good person she is. From our forums, “Dayzed and Confused,” mentioned how Philly, who gave up Pocket, knowing he was his son, didn’t sympathize with Carly, but instead, lectured her about giving up Mel. Maybe Carly needs a pal who understands where she is coming from!

According to my poll, the majority of voters love the twist that Daniel’s Melanie’s dad. I had doubts in the beginning but am right into loving this, now. Daniel, who looks even more handsome with his darker do, hasn’t had much story to really show his acting chops on the show with and he is doing a great job with his new discovery and already thinking like a parent. Melanie, on the other hand, is all drugged up and out of it! I’m not crazy about the dialogue they’ve got her spouting. It’s too childlike. Brilliant though, how she’s going off about how horrible her childhood was. And it was. My heart broke for her all over again.

The downside of the secret being out is that Chloe got hurt when Carly accidentally let her secret slip. Daniel was spot on, haranguing Carly over her deceit, while Chloe’s insecurity was really blown out of proportion. I fear Danloe could be history if she doesn’t look at this as a positive thing. She feels threatened, which I understand, but needs a friend’s support and a reminder that she can still “give” him a child – a baby- and they can experience all of the poopy diapers and late night feedings together that she craves.

The downside to this story? I don’t recall Melanie and Daniel every being that close of pals, but the show is pushing them together as though they are a lot friendlier than they have ever been on screen.

Upside? Vivi won’t be harassing Melanie anymore. While it seems she’s moving out of the Kiriakis manse, Victor’s convinced she’ll return once Philly calms down some. Could be. He does seem to forgive his parents for whatever shameful things they’re involved in, after some time has gone by.

Hope and Bo got a little screen time this week. The familiarity between the two was sweet to see, but doesn’t mean they’ll be back together anytime soon. It’s good they can still work together. Hope’s got dignity. I respect that a lot and it only makes me like her more. Now that they’re apart, the writers don’t have that need to write her as a shrew, and she’s just plain miserable, stating how she has never loved another, and has lost Bo to Carly. Meanwhile, Justin’s hanging on her every word, hoping to help Carly’s case so he can get closer to Hope. Meanwhile, Barly is acting like a boring old married couple, already, bickering about who is going to handle Vivian and who takes the blame for Bo’s marital issues. A romantic relationship it’s not.

This week’s ski trip for Stephanie and Nathan and the sex was supposed to get Nathan’s mind off of Melanie and somehow cement Stathan’s relationship. Is it supposed to be reminiscent of the Philip/Belle/Shawn triangle? If it is, it’s not really working for me. I had more invested Philip/Belle and Shawn, and Stephanie really isn’t the bad girl type. She tried to come clean with Nathan, twice, but didn’t try hard enough. Hey, when you’re getting good sex, you don’t want to let that go! When Nathan prompted the newly married and therefore off limits Mrs. Melanie Kiriakis to admit she still has feelings for him, I was glad he didn’t get an answer. Melanie made her bed. She now needs to lie in it.

Speaking of lying in it, here’s a couple who love lying in bed. Bradianna. That’s perhaps the only thing I find interesting about their relationship is that they have lots of makeup sex and we get to see Brady’s chest! They’ve been off and on, much like Sami and Rafe, since day one and I say it’s time for them to cut their losses and move on. Ari’s insecurities over Nicole get the better of her each time Nic’s name is brought up. If Brady really was over Nicole, he would have asked somebody else to tell her about Sydney. I can't help feeling that if he was really in love with Arianna, he wouldn’t do something that hurts her so. It wouldn't be worth it. It looks like Bricole fans have something to look forward to. I admit I do, too. I can see how the show is letting in a glimmer of a relationship open to Ari and EJ, but who knows what the writers have planned for EJami, now that EJ’s Sami’s hero. Nicole returns next week and her old pal, Dr. Baker, we all ‘thought’ died, is back, too!

Many of the younger fans are complaining that the younger characters have such boring or irrelevant to today’s society storylines. I don’t think it helps that we don’t see these teens enough, but they’ve a point. There isn’t much action going on with these guys, and I gather the reason is partially that soaps in general are not bringing in a ton of new young blood as they once did. The fans are long time viewers, mostly, so perhaps it’s the reason why the writers don’t focus on the youth. I don’t know. It’s just pure postulation. This week, Chad invited Gabi to see the new flick, "From Paris With Love." I guess they already saw Avatar. I wasn’t clear if they made it to the show or not when devious Mia got in the way and lured Chad over to Maggie’s place under the guise of discussing how to cheer up Will. She admitted she still thinks about him when she’s...gulp...alone, and he admitted he does the same. They kissed, but he backed off, stating how wrong it was. Wrong because of Will or Gabi or wrong because he’s confused? Funny how neither of them mentioned the real reason they met, which was to discuss ways of cheering up Will.

That’s all I have to say on this past week’s episodes, except that I’m glad the Sydnapping is over and am psyched for Nicole’s return and a new story or two! Have yourself a fantastic weekend and we’ll meet here again next week!