Days of our Lives Emmy Pre-Noms!

Chloe dated Lucas, had an affair with Daniel, married Lucas, was poisoned by Kate, decided life is too short not to be with the one you love and, divorced Lucas, running right into Daniel’s arms. Mostly, she was in a coma for months on end. It's hard to pull off a coma when your chief asset is your... uh, eyes, but she did it memorably. I still think about her in a coma whenever I see her.

Nicole married EJ, had a miscarriage, faked a pregnancy, paid Mia to hand over her own baby, stole Sami’s baby, switched the two, grieved for Grace, kept up all these lies, but in the end got caught, so kidnapped Sydney. There’s more, but we didn’t think you could handle remembering all that coming from one poor soul’s life in just one year! She channeled an extraordinary amount of energy into a plot that definitely needed it, transforming herself with remarkable agility at each twist and turn. Even though she did terrible things, she still managed to be sympathetic without turning into someone completely pathetic.

Daniel and Kate had a sexual relationship. Kate wanted more, but didn’t say so. Daniel broke things up with her and started seeing Chloe, Kate’s son’s girlfriend, and this made Kate turn into a psycho. Why she’s not up for a pre-nom is anybody’s guess, but we digress. Daniel and Chloe tried to keep their feelings to themselves but just couldn’t do it. He saved a bunch of people’s lives and that’s basically his year! He managed to keep his tan all year in Salem and proved that he was creative enough to have on-going conversations with Chloe.

Stefano mourned Tony’s death, tried to have Philly killed, found out he had diabetes, learned Nicole could be worthy of the name DiMera, he helped her hide Sydney’s paternity and maternity, learned that Kate tried to kill Chloe, married Kate in order to keep her out of jail, and it’s been interesting ever since. How is Stefano a support player and Victor isn't? I don't know. The character actually changed enormously over the past year and he's become a far more subdued and melancholy man, hardly the megalomaniac he used to be, but still frequently fascinating.

Melanie tried getting her life on track this past year. She fell hard for Philly, who flip flopped between her and Stephanie and finally decided Melanie was the girl for him – that is, once she started to show interest in Nathan, who helped Melanie, the new nursing student, save Chloe’s life. Melanie and Philly’s first time together, sexually, was caught on tape by a hotelier and broadcast on the internet, and she got engaged to him after, while pining over Nathan. Lots of ups and downs and she managed to make every scene Melanie is in full of ups and downs.

Stephanie. Poor Stephanie is a good girl. She’s a Johnson, but this past year she was engaged to Philly, who also had eyes for Melanie. Stephanie was kidnapped while hanging out at the Kiriakis gardens in her skivvies and locked in a morgue drawer for days on end. She almost got hooked on drugs, her parents moved out of the country. She’s had it bad. She survived an engagement with Philip and a trip to the morgue but still managed to be one of the most lively former beauty contestants on Daytime.

Chad came into the picture last year as Mia’s ex-beau, the DA’s son and the father of now deceased Grace. He didn’t know she was his and didn’t get to meet her or hold her. He’s new, so not much has happened, but it’s about quality, not quantity. From the moment he arrived, Chad Peterson Woods managed to live up to everything his three part name suggests. He's also shown the ability to let his hair talk for his character.

Will has had a tough year, but with parents like Sami and Lucas, he is used to it and seems not to have been touched by their parenting skills or lack thereof. Last year he returned from Switzerland, found out he had a sister, barely got to know her when she passed on, then found out Grace was never his biological sister and was able to spend time with Sydney, his bio sister. That was short lived when she was kidnapped, and on top of dealing with all of this, the girl at school he likes, Mia, had been lying to him all year. He hasn’t had it easy, and has had a lot to chew on. He managed to be one of the most believable teenaged characters on soaps.

Are there actors who you would have liked to have been pre-nominated by their peers who you don’t see on the list? Are you looking forward to the nominations and the Emmys themselves? As usual, Soaps.com will return early April, to notify you of any nominations for the show and we’ll be there to provide coverage in June, and to support our soaps! Please feel free to check out the rest of the 37th Annual Daytime Emmy Awards Pre-Nominations! 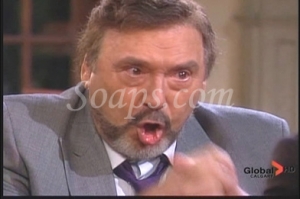 Credit: Must be exhausting weeping. (Soaps.com)

Soaps.com has learned that the Emmy pre-noms are in for the 37th Annual Daytime Entertainment Emmy Awards. Guess who is on the list from Days of Our Lives?

Matthew Purvis and I thought it best to write a joint article about the show, considering we both write updates and news for it on our respective sites, Soaps.com and SoapOperaFan.com. You’ll find Matt’s notes are all bolded while mine are not.

Hope was a busy woman this past year. She and Bo had issues over his visions, she shot Kayla by accident, her own child, Ciara was kidnapped, and Bope’s relationship had not been the same since. Tough year. Lots to work with. Hope always clung to hope; while Bo flaked out, she tried to be a rock and it showed.

What didn’t happen to Sami this year? She gave birth to EJ’s kid, hid it from everyone, “adopted” Grace, who died, was mourned and then to top it off, she learned that baby wasn’t even hers and that Nicole switched babies at birth. 2010 didn’t get much better for her but the pre-noms don’t cover this current year. Ali must be exhausted. All that crying, all the worry, the heartache. I’m always amazed by how much time she can spend not crying since I assume that Sami is actually a fish on dry land trying to keep herself surrounded by enough water so she doesn’t suddenly die.

Victor was the life of the party this past year. He made us laugh, he made us roll our eyes and even turn up our noses in disgust for some of his nastier behavior. He was on to Kate when she was trying to kill Chloe, he let Caroline know that he was still enamored of her, he fought the DiMera’s and then made amends with them, got into Brady’s business, sold EJ his drug lord title, handed Titan over to Philly then took it back. He holds an odd place on the show as the king of one-liners, packing more into a pithy remark or an insult delivered with such casual and cunning venom that it can summarize as much about a character or situation in a few seconds as most of them manage in a few weeks.

EJ had quite the year. He was happy until his whole life came crashing down when he learned Sami hid her pregnancy from him and Grace was his kid – after she died of meningitis. But wait! Grace wasn’t his kid. His kid was alive! Nicole hid a miscarriage from him, faked a pregnancy, then stole his baby with Samanther, to give it to him. He felt somehow betrayed and spun out of control right into 2010. And that’s not even half of what went down with our favorite villain. He let his dark side come out with a vengeance and it has become more nuanced, more focused, cruel and, it has made him, surprisingly, more moving, frightening and funny than he’s ever been.