Daniel suddenly became prominent in the Melanie storyline over the past few weeks, since Carly arrived to town. It didn’t take a Hernandez to figure out who Daniel was. Will Chloe be happy that she’ll soon have a step-daughter if she and Daniel ever marry? The whole thing has made me wonder how old Daniel and Carly are supposed to be. I thought Carly was in her 40s while Dr. Dan was maybe late 30s. He’d have to have been about 18 to have young Mel as a daughter. It’s a little out there for me to believe – not just that but the close friendship that the one night stand produced with Carly and Dan – are you BFFs with your one nighters? I digress. Perhaps if Mel were Mia’s age...I also started to consider Philly’s age. Isn’t he more mid-30s? The whole thing is a little weird to me now and seeing Philly lean over Mel, kissing her forehead has a feeling of an older dude looking after a young filly. Melanie’s crying jags in the hospital contributed to the feeling that she was much younger than him. We’ll see what happens once she’s able to return home – to the mansion!

Teens? Who are these people? I hardly recognize them, they're on so little! Mia is still after Chad, and Gabi’s into Chad. I would rather see Kinsey, because this Mia wanting Chad thing has not been shown for such a long time that it’s no longer relevant. How do you become invested in characters that are never shown?

How did you feel about the show this week? About my column? I wish you all a great weekend, filled with love and happiness. I’ll see you back here next week!

Psst! In case you hadn't heard, the 37th Daytime Entertainment Emmy Award Pre-nominations are out! Click the link to learn who is up for DOOL! 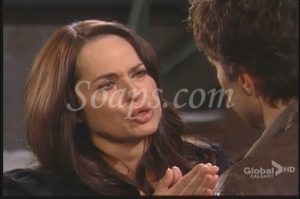 Credit: Who are these two?! (Soaps.com)

This week was all about Melanie learning about who her ‘people’ are and about EJ trying to figure out who he is. All around, it was a decent week that left us moving on from Carly’s secret and moving forth with this Sydnapping storyline. A little. (Don’t worry, it’s all over soon.) Let’s delve into it.

In a surprise twist, EJ didn’t forget about Nicole and asked Brady to go to her and break the news of Sydney’s “death” gently. He didn’t really care about Nicole, but wanted to make sure he had everything covered. This of course tweaked out jealous Arianna, who prefers Nicole would fall off the face of the earth. Literally. I can’t blame EJ entirely for this behaviour, knowing that as a DiMera, he’s already mentally addled, but the poor sod has gotten a little bi-polar watching Sami and Rafe break up and make up about a dozen times in each episode, and he has had to change his plans for Samanther to suit. Samanther, who professes one minute she’s in love with Rafe and treats him like yesterday’s trash the next, got a clue Tuesday, that Rafe is actually a good man, when she caught him crying over the loss of Sydney. See, the Safe relationship is often one sided. Sami’s actions leave the Ejami fans wondering why she can’t commit to him and if it’ll leave her open to EJ, who Matt, in his own DOOL weekly blog, Matt’s Musings, says, “In Shakespeare’s day, people just did things because they were evil, not because they had one of the most twisted and dubious love fixations in dramatic history.” Gave me a giggle but he’s right! To read more on that, click the above link.

Then again, if Nicole and Sami hadn’t started this whole mess would EJ have the need to turn to his DiMera roots? Or would have have gone bad, like meat left outside on a hot summer’s day? He’s the most interesting character on the show, non?

Bo tried to be a commish, but he’s not even a good cop, so that didn’t turn out well, and he couldn’t get enough evidence on Victor to put him or Vivian away. Of course not. In fact, Victor cried harassment and Vivian’s still wandering the streets of Salem. I am not sure I even want to mention Carly and their relationship.

It wasn’t bad enough Melanie was shot on her wedding day but she woke up – drugged up – to uber scary Carly, leaning over her, telling her that she’s her mommy. You’d think with all of Philly’s money, he’d have had a guard at her door, but he was too busy raging at Vivian for trying to off his new bride. Instead of hitting her with a poker, he told Vivian she wasn’t worth it and chose the so called high road and walked away. So how is this supposed to work with them all living under the same roof? He might as well move into the DiMera mansion. Bo came in and got Mel a guard nearing the end of the week, but the dolt left to escort a very dizzy Maggie Horton someplace while Vivi slipped in, unnoticed, and tried to off poor Melanie. Melanie woke up, and in a drug-induced haze, told Vivian that considering how horrible her life has been all these years and how it doesn’t seem to be getting a lot better, maybe she would be better off gone. Vivian felt understood and started to weep, and I started to feel for Vivian and then she decided she couldn’t bear to off such a sweet gal as Mel. It worked for me. Some complained that Molly’s crying was over the top but I disagree. She was drugged up, shot on her wedding day, learned Trent’s not her dad, meaning Max isn’t her blood brother, but the woman she has detested, Carly, is her mum – and she has feelings for another man. How would you react? *wink* I was just glad she was out of it. She’ll need that rest to make it through the next shock, that Daniel Jonas is her daddy. Let’s talk about Daniel…