Bo found Hope in the warehouse basement, where Carly abandoned her to shoot her daughter, I mean, save her daughter. He took Hope to the hospital and when she started to say Carly’s name, and become agitated, the nurse injected her with some Valium or whatever. Why? Why not let her talk? Is talking going to kill her? So dramatic! Anyway, when she came to, she remembered everything, and was about to save Carly’s skin, sort of, when across town, Bo used peanut shells and some belly button lint to bail out his lover, Carly. Hope got hit three times. Once when Gus threw the crates on her, then when she learned her husband bailed Carly out of jail and lastly, when she realized correctly that Bo really is in love with his ex. Triple whammy. Poor Hope. She reacted with dignity, as usual and I felt for her. Carly, on the other hand, acted with stubbornness and selfishly when she went against Bo ‘my penis rules my life’ and his cop orders and sneaked in to see Melanie. Clearly, Carly’s thinking with her heart, once more, and not realizing that if she’s caught, it’s all on Bo. Not to mention the fact that Melanie will likely hate her for shooting her! Wouldn’t she be the last person Melanie will want to see? Poor Carly…

The Salemites that were not at the wedding were making drama of their own, as usual. EJ deciding that Sami wasn’t nearly as devastated as he needed her to be, stepped up his little evil plan a little more, Sami, who should be out of tears by now, tried hard to cry but looked numb -even she’s tired of the storyline - and Rafe kept up the usual dialogue. The thing is, it’s a bit of a joke, isn’t it? Anna told EJ that she washed the clothes as he instructed- that Sydney wore. You know the ones with the blood on them from her nosebleed? She told him she washed them with bleach, so there would be no trace of DNA on them. He told her to get them for him, ripped them up and threw them into the Salem River, yet when he did, we saw blood still on them. What kind of bleach does Anna use? I’d hate to leave her in charge of laundering my clothing. So the DNA was supposed to be destroyed, yet the blood stain was still there. There are always holes in the stories, but this was not remotely believable to me. In case you thought the Sydnapping was nearing it’s end after this so called February sweeps you can count on it going on longer. EJ hasn’t gotten off nearly enough on Sami’s grief, so there’s more in store. Uh. Ugh.

All poor Rafe did all week was his job as an FBI agent, but Sami needed him to be there for her as a man, as a beau, not an agent, so instead of communicating this with him, she turned to ex-husband, Lucas, for support, and then ran out on Rafe. Why? Because she still doesn’t trust him. We discussed this last Friday. The reunion was only written so that they could break up once again, to further an Ejami reunion along, it seems. It’s frustrating. And what a kick in the face that was for Rafe, who was just trying to get her kid back for her. But much like Daniel, he needs to back off work and remember to be a man, first. Agent second. Most men in Salem are their jobs first, before being a man. Look at EJ, the lawyer. He’s a businessman first, before a husband, as we saw with Nicole. And speaking of which, in order for EJ to get back together with Samanther, or to get together with her at all, considering they never really were together, he needs to have her under his thumb as he did with Nicole. The thing is, he’s attracted to the wrong type of girl. It’s somewhat of an exciting chase for him to attempt molding a woman to his needs. The problem is, it didn’t work on Nicole, who has come to her senses, and it won’t work on Sami, who is similar to Nicole in character. EJ should just forget the chase and find a sweet virgin to mold that he can toy with.

I'm being facetious. Sort of.

Well folks, it's Friday and I've a dinner party to plan. Do something dramatic this weekend. Find a sweet virgin you can mold and toy with. I'll meet you back here next Friday! 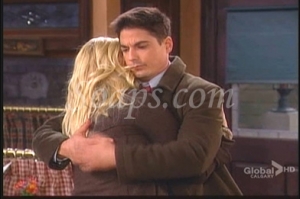 The week was a short one, with Monday being pre-empted. The week focused around Carly accidentally shooting Melanie and the aftermath of that, as well, EJ’s Sydnapping storyline, which made progress. As usual, there were holes all over the place, the characters think with other parts of their anatomy as usual, and Rafe’s dialogue hasn’t changed one iota. Let’s break it down.

The week started out with Melanie and Philly being wed by Abe (Abe? Do Salem mayors always marry people and make arrests?! Holes in the story?) and with headstrong Carly, determined not to allow Vivi to kill Mel. Poor Carly. Instead of protecting Mel, she shot her by accident and Mel’s life was left in the balance all week. Throughout the week, Kate sneered and gloated, while Vivi prayed for the reaper to visit Mel. Lucas flitted around after Kate, like he was her driver or something and Philip refused to leave his bride’s side. The moment he did, he learned that Incubator Mum was the one who tried to kill his bride, and that Carly was only trying to stop her. Wait until he talks to Vivian next week about this. I do love Philly when he’s angry and though I hope he lets her have it, I prefer if Vivi talks her way out of it, so she can live in the Kiriakis manse and let the games continue.
I’m starting to understand Victor a little better – or should I say I’ve finally taken time to consider who he is. Victor foiled Vivi’s plans to kill Melanie, and he even had kind words for Maggie. He seems to reverie the mature ladies and finds most of the younger women to be street walkers. He has never really known the love of a good woman, with the exception of Caroline, who wasn’t his in the first place. He was involved with Carly. That didn’t work out. He married barracuda Kate and wanna-be murderess Nicole. Those weren’t good marriages. He’s bitter towards women because of all of this. Look for him to admit to becoming fond of Vivian. This has interesting possibilities.

Poor Chloe had a hysterical pregnancy, leading us to believe that we’ll see Chloe going a little off, mentally, in the near future. Her scenes with Daniel were moving and for the very first time since she was ghoul-girl, I felt for this character. You guys know I’ve always maintained that Daniel has to be Melanie’s father. In an interview, Crystal Chappell said that she was conceived at a medical conference. There is nobody else it could possibly be, so I’m just going to say it’s him. If I’m wrong, that’s fine. Once Chloe learns Daniel is Melanie’s daughter, it has got to play a part in her baby blues. It’ll be interesting to see her reaction to the news. (His too!) I guess Chloe doesn’t want to have a baby via surrogacy or by adopting. My least favourite quote of the week came out of the 1950s. “I’ll never be able to give Daniel a baby.” I thought it took a man and a woman both to have a baby. It’s not a gift you give to your husband. Daniel’s so wrapped up in being a doctor, as they mostly all are, that he insensitively made an appointment for Chloe with a therapist without her consent. Now I really feel as though they’re living in the 1950s. Chloe must have felt it too, because she was insulted, cancelled the appointment and crumpled the card. It’s one thing to suggest therapy, but quite another to make the appointment. He was only trying to be helpful, but instead of thinking like a doctor, he should be thinking like a husband.

What Stephanie or Nathan do doesn’t concern me too much. It appears as though they’re acting on another show and if I never saw either character again, I would miss nothing. Don’t get me wrong. People can automatically jump to the conclusion that this is about the actors. It’s not. I like both actors. It’s the characters that never get to intertwine with others. The very same characters who both have family history on the show but you don’t get to see enough of it. The show doesn’t seem to care about these two so how can I? Stephanie doesn’t care about herself, which doesn’t help matters. She doesn’t mind being second best. She and Nathan went to the resort to ski and have sex. For somebody who was nervous, she sure seemed on top of her game coming out of the bathroom in sexy siren red lingerie. I felt nothing for these two until the second time they fooled around in bed. That scene was pretty hot, but of course Nathan wants Melanie and she was on his mind the whole time, so you can’t get too excited. 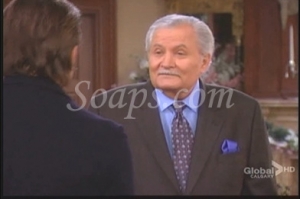