During the nuptials, Gus kidnapped Carly. She knew who he was. Hoping he’d take her to bed, she wasn’t happy when he instead took her to the basement of the abandoned cannery and didn’t even bother to tie her up. Bad. Bad henchman. Only in Salem, right? Carly screamed as she watched Vivian place a comb on Mel’s head. Vivian, at this point, hadn’t even told her the comb was poisonous so why did she scream? Vivian told her afterward, in the warehouse, just before lightweight Hope busted through the door that big hulking Carly, who can overpower Gus like he was a baby bird with her Vulcan death grip (hilarious!) couldn’t even get through. Hope let Carly know Melanie’s safe, but somehow, Hope’s detective skills were in her butt and she missed Gus lying unconscious on the floor. He came to and pushed these huge empty crates on top of Carly and Hope, crushing them. Luckily, Bo finally received the mounting messages from both his ladies after his er...stakeout was over. Will he rescue Hope or will he go after gun toting Carly? (OoOoOo.)

Meanwhile, Kate, who was worried about Vivian spoiling the wedding, had Stefano call in a favour to ensure Vivi never made it to the nuptials. Kate lecturing Stefano on not dressing for the wedding but ignoring him smoking that cigar was amazing. Doesn’t he have diabetes? Smoking raises blood sugar levels! I was surprised Kate wasn’t written nagging him about that. At least Lexi took away the sweets he was stuffing down his throat at the wedding. While the ceremony was sort of touching, the guests spoiled the reception by snarking at each other. Did you think it was sad that the only thing left for Lucas to do before he’s offscreen for good was to go around threatening that the wedding better go off without a hitch? I’d almost rather see him gone now, than suffer his character being turned into a gopher.

What are your feelings of what went on this week in Salem? Do you agree or disagree with what I felt? Did you enjoy the wedding? What advice would you give the writers that would make the show even better?

Have a fantastic weekend. Even though I don’t celebrate, choosing to tell my loved ones how I feel about them every chance I get, I wish you all a happy Valentine’s Day. If you’re single, don’t fret. Call somebody you love. Bake some heart shaped cookies. Do whatever it is you do to make yourself have a great day and remember that you don’t have to celebrate some random commercial day to feel good about yourself.

If you'd like to read how Matt saw things this week, head over to Soap Opera Fan to read his musings! 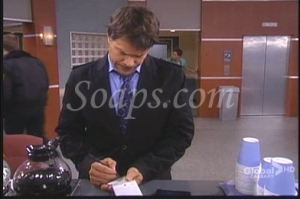 I had to watch several Meryl Streep movies this past week in order to recap this week’s DOOL. I can see that was a mistake. It has only made it more painful to watch this week. Sure, the show had some decent moments, but there seems to be something missing overall. Let’s get into what happened.

This week started out with Victor checking his surveillance tapes and discovering yummy Gus, Vivian’s “boy toy” and Vivi were plotting. He quickly figured out what they were up to and switched the poison tipped comb with another and saved Melanie’s life in the process. He did it on the sly, making me wonder if he’s got some fondness for Vivi, after all. I was happy that Nathan, the ex-uh-date? didn’t save the day. It was bad enough that he considered stopping the wedding. Thankfully, his good taste and Horton upbringing stopped him from doing so. Breaking in on a wedding to tell the bride you don’t want her to marry somebody else isn’t the way to go. Besides, he already attempted this in a drunken state at the pub and it didn’t work. I disagree with a 19 year old marrying anybody, but I’m glad the writers followed through with this storyline.

Scooby-Doo, where are you?

Abe did a 180 and decided Hope’s living arrangements had nothing to do with her job integrity and she’s back on the force. She wanted to be in order to make her snooping appear more legal. Somebody watched too much Scooby-Doo before writing this story.

EJ fired Anna and Anna tried to threaten him, which was laughable. He is EJ, after all! He decided she was the only person for the job, and he’s right, so he rehired her. Sami and Rafe got back together for no apparent reason, other than each hasn’t had candle lit sex in a while. I suppose I should be happy they didn’t get together after she –hopefully- learns that EJ’s behind the kidnapping! That’d be unoriginal, but I don’t get why they reunited at all, considering nothing has changed. Sami still blames Rafe for the kidnapping. EJ learned of the reunion and was angry, considering all he did to separate them didn’t work. Amusing. I think it gets him off to make Samanther squirm. Ugh. What lengths will he go to next? You’ll see.

Back to Safe. Let me get this straight. Hope can’t forgive Bo for his handling of Ciara’s kidnapping and they’ve been through Billie Reed and Bo’s kid Chelsea killing their son Zach and came out on top. Baffling. Sami and Rafe have known each other a year. Their turn ons include resolving issues by breaking up and getting back together, and sex by candle light. They’ve not yet resolved their issue of trust, but they’re back together. I’m mystified.

Buns in the oven:

Chloe told Daniel that she’s preggers by baking him cinnamon buns. “Speaking of buns in the oven,” she told her intended. I cringed. Chloe isn’t that cheesy. She’s also not my parent’s age. Anyway, poor Chloe can’t carry kids to term, we finally learn, because chemo destroyed her ovaries. Yet…they were thrilled that she was pregnant. Shouldn’t she be on birth control so that her body does not go through pregnancies that can’t be carried to term? It’s not healthy for her to go through miscarriages like this and we all know that’s where it’s headed. Unless she is in fact not pregnant at all. Could this be a hysterical pregnancy?

All week long, poor Melanie looked like a wreck, but none of her friends noticed this. Vivi had multiple fantasies about Mel dying and pressured her to get rid of her wedding jitters and put on the poisonous comb already. Even Melanie, Stephanie and Ari thought Vivian was a spazz with that stupid comb. Melanie’s a lot nicer than I’d have been if somebody kept thrusting that stupid gift at me. Poor Mel had nobody to confess her true feelings with and writing the note to Nathan and giving it to backstabbing Steph who kept it did her no good, so she spent the week worrying about whether or not she was doing the right thing by marrying Philip. That’s why she passed out. Stress. We know she loves Philly but there are some undetermined feelings for Nathan somewhere in her heart. She and Philly are now married, so though she should and can put those feelings for the doctor aside, this is a soap opera and I doubt that’ll happen! 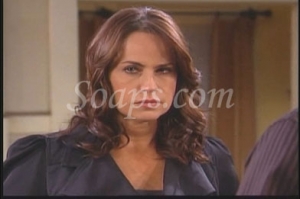