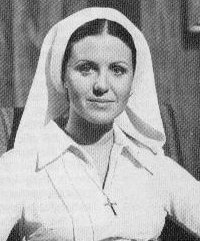 Lanna Saunders who portrayed ‘Sister Marie Horton’ from 1979 to 1985 passed away on March 10 2007 at age 65 due to complications of Multiple Sclerosis.

Mrs. Saunders was born in New York City and followed in the footsteps of her father and grandfather who were both actors. She started her career on Broadway at the tender age of 13, where she appeared Sunrise at Campobello, Milk & Honey, and was original member of the Lincoln Center Company under Elia Kazan and Robert Whitehead! She also appeared in ‘After The Fall’ by playwright, Arthur Miller. She was well known for her long term role as Sister Marie Horton. Saunders worked on Days of Our Lives up until she became too ill to work in 1985. She had been diagnosed with MS just three years previous. Although she was too ill to work, she remained an avid theatergoer.
“As an actress, as well as a person, Lanna Saunders had an elegance and grace that bespoke the deepest qualities of her soul which made her character, Sister Marie, honest and believable, yet so easy to look at,” said Ken Corday, executive producer of Days of Our Lives.

According to Lawrence Pressman, who is the husband of the deceased, “She fought like a tiger and had the demeanor of a lamb.”

Saunders is survived by husband Lawrence Pressman and son David Pressman, who is also an actor.

All of us here at Soaps.com would like to give our condolences to the Saunders/ Pressman family during such a difficult time.