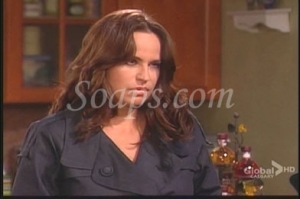 This week moved rather slowly in Salem. There were no real inroads in the storylines, we heard a lot of the same dialogue and saw some of the same flashbacks. If you didn’t watch any of the episodes this week, it wouldn’t matter. Perhaps they’re holding back, with February sweeps being just around the corner. We’re still being bombarded with the “I’m there for you,” theme and there seemed to be a trend of people barging into the DiMera manse, but Harold quickly put a stop to that on Thursday’s show and even EJ was starting to become weary of it. Because literally nothing happened this week, we’re breaking things down a little differently.

Same old dialogue:
As I said, the dialogue is the same each day for many of the characters. At least the actors don’t have to memorize too many new lines.
Anna calls to ask EJ how things are going. EJ says, “Things are going great.” He’s always telling her that things are going great. Even sarcastically. She’s always calling to ask him for updates. Daily. “It’s so contrived.” <- That was a repeat quote from my last column. EJ and Sami bonded more this week. EJ told Sami, "I will bring Sydney back. I promise you that." He and Rafe have been telling her this each day for weeks, fighting over who is going to bring Sydney back to the fair Samanther. Less talk and more action. We’re all dying for this storyline to end and for the show to move on to something more fresh. I no longer care where Syd is or what happens to her. Okay, I do. The little tyke is adorable but things need to pick up. It’s a shame this storyline will play all the way into February sweeps.

Daniel told Carly that he’s ‘there for her’, after she droned on about how much she’s hated. “I’m there for you,” is the most popular saying in Salem. Nathan told Maggie he was ‘there for her’ this week when she almost fell off the wagon. Almost. Maggie’s made of steel, even when she’s breaking down over the death of her husband, you feel nothing can keep her down for good. I’ve always enjoyed Maggie, even though she’s a busybody. We saw some fantastic acting from Suzanne during this crisis.

The dialogue is not all bad, in fact, Days can be repetitive but the show wins for funniest lines hands down, over any other soap. Usually the lines are split between Melanie, Vivian and Victor. No soap can keep up. Trust me, it’s my job to know. One of the most recent clever lines came out of Vivian’s mouth when she was upset that Victor told her she wasn’t allowed to kill Melanie. “Now I’m back to square one. Kill Carly. So anticlimactic!” And it is. It was – because of course later on in the week Incubator Mum reneged on her promise to Victor to leave Melanie alone and let dead Lawrence talk her into killing Melanie, instead.

Killing fantasies:
Carly fantasized about Vivian killing her or killing Melanie. Vivian fantasized about killing Carly, and both of them fantasize that Lawrence is alive, talking to them. It was a little out there, but not surprising for DOOL. The first time you watch, you’re on the edge of your seat, thinking this is a surprise the show has kept even from the press. After that, you can tell it’s just another dream sequence and can get a coffee or fast forward the scene if you DVR it. Vivian, who was more excited to kill Melanie than Carly, even though she is actually quite fond of her (kudos!) listened to Lawrence’s advice and decided she would indeed kill Mel, therefore proving she loves her nephew. She even explained this to Victor, who, much like myself, thought she was going bonkers.

Same old flashbacks starting the first scene of two back to back episodes this week:
Sami tidies up her house as she flashes back to arguing with Rafe about how he handled the kidnapping.
Sami cleans her house and thinks about telling Rafe she doesn’t believe in him anymore.

Sami and Rafe are clearly deeply in love with each other. Can anyone count the many, many times the writers have broken them up? They could simply flashback to an old breakup to save on paying the actors to repeat these scenes. It’s become a running joke that they’ve broken up. People don’t believe it’s for long, at least those who watch faithfully. Trust me. They’ll get back together soon.

Here’s a flashback I appreciated, even though it’s been done since the Christmas episodes. Hope flashed back to sailing with Bo, and it fit right in perfectly with the scene. She was holding the sailboat she purchased for Ciara – the one Bo broke, when she was reminiscing. I liked the parallel between the broken sailboat and their broken down marriage. We can see it’s officially over and Bo has moved on with Carly, sadly. I’m sure they’ll get back together at some point. I’ve got to tell you, that Bo moves faster than a two dollar hooker on the corner of Jarvis and Dalhousie, when seeing a limo drive slowly by in Toronto, on a Saturday night.

Some plots too forced.
There are many examples of this but I’ll stick with just one. The whole Melanie vs Carly thing was forced from the beginning, as we’ve established. And although it’s nice to see they’re on friendlier terms as of Friday’s show, it’s again too forced. It’s a matter of too much too soon to make it believable. Maggie gives Melanie advice on how to treat people – even those one disdains, for no good reason, Melanie decides to relax on Carly, and suddenly, they’re best of friends, chatting about Carly’s lost daughter. Carly even had the gall to offer to help Melanie with her wedding plans. Ugh. Though even I can admit they were very sweet with each other, I almost threw up at that point. Vivian. Please. Take. Her. Out.

Summarizing what Sami did this week - just for fun.
Bawled, blew her top, blurted out a bunch of things she didn’t mean to say, and ran away from conversations afterward. It’s almost as if the writers enjoy writing Samanther miserable. They enjoy writing Sami and Rafe breaking up only to return to one another with a renewed love. It’s nothing new. I’d like to see another character have major issues and storylines aside from just Samanther and I’d like to see her happy for a few months. I'm worried her head's going to blow right off if she keeps up these eruptions.

What did we learn this week?
Mickey buys his anniversary gifts well in advance. This storyline too has become a little too contrived. They can try to recreate the past and turn Mickey into Tom but why not try something new? Wouldn’t it be more fun for Maggie to find a whole other family of Mickey’s hidden somewhere? He did travel a lot in recent years. Not that I want to sully Mickey’s good reputation, but wouldn’t it be more interesting than watching this drivel day in and day out? I’m in need, as I’m sure some of you are, of a reprieve.

With Nicole gone, Salem’s just not the same. In fact, I don’t think the show is the same without Arianne Zucker, who thankfully returns first of March. Fingers crossed she’s let out of jail so she can go back to doing what she does best. Scheme! I’d love if Stefano got her out of prison and she had to live at the mansion, where she learns what EJ’s doing to Samanther. I find it hard to believe that Stefano isn’t on to EJ more after finding the baby medicine in EJ’s coat.

That’s really all there is to what happened this week. My rant is over, and though I’m a little disappointed with the show this week, we know things could change next week. I’ll see you back here then! Until then, Matthew Purvis, as some of you are aware, also dishes on DOOL each week on SoapOperaFan.com. Check out his DOOL column each Friday. Find out this week why he said, "We call it 'slur or shut up' around the office and it's become our favorite drinking game since we had to stop playing the one where we took a shot every time Sami started balling. It was just too hard to get through the day after that."

Cheers to a grand weekend!