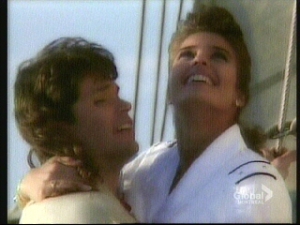 Daniel and Chloe welcome in the New Year (Soaps.com)

Thoughts on the week of December 28-January 1.

A New Year is set to arrive in Salem and this gave its citizens plenty of time to churn out the nostalgia. Rafe and Sami recalled their safe house romps of near perpetual bickering; Daniel remembered carting Chloe around after she stubbed her big toe; and Maggie remembered getting some dancing shoes. The memories were less bright for everyone else though. Mel remembered that she and Steph used to hate each other but now they are frenemies and Carly remembered being buried alive. Viv remembered that too, but it was a heart warming memory for her. Everyone looked forward to next year being better and happier, but if New Year’s Eve is any indication, they might want to keep looking back.

Oh Philly… how many times have we seen you stride to the aisle with your dimples shining? Well not that many I guess, since he rarely makes it all the way. Vivian and Kate had taken it upon themselves to try and plan mutually exclusive, and rather extravagant weddings, for the smirking groom and burbling bride. Fearing that they would be whisked off to Melaswen and forced to ride elephants to a church made of banana and gold leaf before being married by a celebrity televangelist as Celine Dion sang them down the aisle, Philip decided to skip the mess and just elope to Vegas. He even took off his usual suit and tie to prove he was being serious. At first, Melanie reacted to everything like she had acid soaked marbles in her mouth, but she kept insisting to everyone that she was happy as a Salem clam to be headed for wedded bliss. Steph was super skeptical and really stuck the knife in about Nathan. Mel didn’t like it and got that ‘I will sleep with your boyfriend on the night before my wedding’ look in her eyes. That might be hard though since Nathan, buoyed by a pep talk from Dr. Dan, plodded off to stop Philip from eloping. They had fisticuffs in the street until a cop dragged them off and dropped them in a cell.

The memories. The flashbacks kept coming as Salem’s square of romantic repeats continued on its path to the inevitable. Carly has admitted that she has feelings for Bo the only way that women in Salem know how, in tears. He was a bit less forthcoming, but he promised to protect her and gave her a kiss. Unfortunately for Bo, Hope just happened to be standing at the window when this transpired. She’d been inspired to run back into his arms after her brain gave her a figure skating themed flashback of their romantic past. She confronted him and then turned to Justin to ask him to write up the separation papers. He refused and admitted that he has feelings for her. They avoided the discomfort which this admission created and decided to search through Viv‘s things to figure out what she’s planning to do to Carly. Hope was conflicted because part of her wishes the worst, while Justin just seems happy to have something to do. Poor Justin. He never gets any flashbacks. He was on the show for four years, did they lose all the tapes or something? As they searched Viv’s room, she returned with Victor and caught them. To confuse the situation, Hope planted a kiss on Justin to throw them off.

The kidnapping continues. Outside of town, Anna and Syd continued to bond at her isolated little chalet. It turns out that she is getting help from someone, though it wasn't exactly clear who is involved. She has various minions delivering her groceries and recyclable diapers when they aren't doing surveillance on Casa DiMera. Since she announced to the baby that she is doing this not simply for revenge, but for cash, one has to wonder where the resources to hire goons is coming from. Back in town, Rafe ran down some more leads which were all dead ends, but his success at getting nowhere has impressed the FBI enough that they want to hire him back. EJ panicked and through tantrums. He tried to hide the ransom note from Sami but she found it. Elvis spent most of the week hiding in his angry dome to avoid Sami's tears and Rafe's smirks. Strangely, Stefano and Kate were largely absent.

Ari gets an enemy. Although Arianna has spent much of her time in Salem being jealous of Nicole, now she has someone jealous of her. She's really started to rub Troy the wrong way, largely because Elvis has taken a shine to her. She asked to meet Mr. Big again and he refused. He accidentally left his phone at Java and she grabbed it, handing it over to Roman. EJ flipped out that so much sensitive information on the phone could so easily fall into the wrong hands but he managed to erase it, threatening to erase Troy from the world at the same time. This was enough to make Troy join the "I want to see a dead Hernandez" club.

Salem's welcoming committee. Mopey Mia tried to make a friend of gabby Gabi. She gave her the deluxe tour of Salem's smelly chowder alleys, its corpse strewn pier, its frozen park for abducted children and coke heads, its pub and bar, its morgue, and its shipping yard filled with drugs, weapons and sex slaves. They didn't make it to the hospital of the charming little town, or the airport with its five chairs and leaky fountain, but they did go over to Maggie's. After they toured the hidden realms of Maggie's house of implied enormity, they met up with the lady herself in the kitchen. Gabi asked for help becoming a candy striper and Mia jumped on the bandwagon, not out of an innate sense of charity, but because she wants to keep an eye on the town's latest teen. As Mia got weird, Maggie got depressed when it turned out that Mickey couldn't make it home for the holidays. She and Julie put on some glitter and went out anyway.

And now... on to the spoilers. If you do not wish to be spoiled, turn away now and enjoy your New Year's Eve. Polish off some chianti, steal some babies and bury someone in a snow bank if you can't find an empty grave. That appears to be what Troy has planned for his chief drug dealer. Since he fears that she's a threat to his position, he hires someone to take her out. Will he hire one of the regular grossly inept goons, or is he really smarter than he looks? Meanwhile, Vivian continues to slowly exact her revenge in person. She tells Bo all about Hope and Justin's kiss. Will this calculated move have the effect she desires? Pretty soon, Carly pops up to make a confession to Viv about killing Lawrence. Is she being smarter than she looks, or is she getting tired of remembering gutting Lawrence? Across town, the kidnapper also makes a calculated move when she reaches out to Sami and EJ. Will this be enough to distract them from the fact that Nicole is in court next week? She throws herself on the mercy of the legal system, which is a pretty dangerous strategy in Salem. She may not end up in Sami's old death row cell, but she will receive her sentence. And Nathan tries to stop Melanie from sentencing herself to a life with Philip when he begs her not to marry the young Kiriakis.

Never fear, Christine will be back next week. Have a safe and happy holiday everyone!

Days of Our Lives Saturday Teaser...