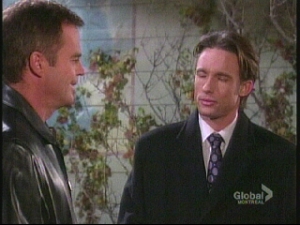 Public Service Announcement: Christine is away for the next two week nestling in the cruel bosom of the winter wonderland known as Toronto. In her place, I’m leaving my regular mooring over on Soap Opera Fan to fill in. I do things a little differently than she does, but I hope this won’t be too painful for everyone. Don’t fret, I promise the blonde one will be back.

It’s Christmas in Salem and you know what that means. Unsolicited advice, family fighting, insults that have been carefully gift wrapped and a few twisted and time tested gifts for the ever undeserving little boys and girls in adult’s bodies who call the clam chowder cove their home.

Losing Hope. Carly and Bo began bickering. They’re both so used to arguing with people that they can do it on autopilot. He even forgot what he was arguing about in mid-sentence. She laughed at him before breaking into tears and admitting that she is falling in love with him… again. But the week was about to start looking even more awkward for Beauregard. It was decided that the Horton family Christmas would be at Bo and Hope’s even if there was no Hope there. She popped in after Doug and Julie had already settled in. Julie, who had apparently been dipping into the eggnog, got excited about getting Bo back with his wife. He quickly dampened her enthusiasm. Even Hope got a little enthusiastic, but a conversation with Bo quickly ended that and he literally left her out in the cold.

Anna’s Revenge. Anna spent the week carefully cutting out letters from her collection of vintage fashion magazines to make the perfect kidnapping note. Always a perfectionist, it took days of concentration to carefully color code it and find the complimentary fonts. When she wasn’t doing that, she talked to Tony’s picture and promised revenge on his super nasty family. Her revenge plot was interrupted when Stefano called and invited her over for the holidays. She didn’t find that sweet, curdling perhaps, and she continued with her plotting.

Salem’s Surprising Sweethearts. Rafe broke the news to Sami that Stefano has nothing to do with the kidnapping. Sami wept. Meanwhile, EJ barged into Ari‘s to accuse her of stealing his daughter… then he wept. She felt bad. He returned to the mansion with an idea for a press conference/vigil. Before he could spill the thought, they got a lead that sent them after Kate as the kidnapper. Although Kate may have criminally bad taste in footwear, she still wasn’t the kidnapper however. After Sami had tried to strangle her and EJ had a tired tantrum, Kate was left alone with Stefano. They shared some tender moments. Rather surprisingly, they have subtly made their way into being one of the most genuinely loving, if malicious, couples in town.

Mia’s Missteps. Mia has become grudgingly aware that she is falling into the disease that seems to afflict most of the town’s women – she’s becoming prone to sporadic bouts of stupidity. For many it gets worse with age, so there is still a little hope for her. She agreed to go to the festival of flakes with Will and Chad. The mess up was soon discovered. Chad blew up and walked off when she made it clear she was going with Will. The young Horton wore a suit but kept his hair the same. Chad ended up taking Gabi, but she ordered him to take a bath first so that he could get the odor of Salem’s air off. After he was attacked in the pub’s alleyway in the Salem version of an Axe commercial for girl approved hair, he went in and picked up Gabi. The dance wasn’t as thrilling as T.’s sardonic jokes about it suggested it could have been. Chad ended up having to show off his years of training with Salem’s Tornado Dancers and taught Gabi to slow dance in the snow as Mia looked on and whimpered.

Brady's Bumble. Ari's tamales didn't prove to be enough to keep Brady's mind off of Nicole, no matter what she wrapped them in. He visited Nicole in the cells and promised to get her a competent lawyer. Finding one of those proved to be a time consuming task since none of them are willing to set foot anywhere near the town. When he finally did, Ari could see how obsessed he still was with Nicole, blonde or not. She threw another fit and ran off.

The Kiriakis Guide To Love. Steph and Nate were moony eyed over each other. After a few mistletoe alerts, they finally made out. Meanwhile, Philip grew some sideburns for the holidays. They seemed necessary to give him the chutzpah for some really reckless behavior, like asking Melanie to marry him. Although she was clearly still harboring some gentle feelings for Nathan, and Philip never harbors feelings very clearly, she decided to think it over. After trying on his ring and being unable to get it off, they decided that they must be meant to be together forever. Apparently Fate has never heard of a little vaseline. To prove how fated they are, he brought her to bed to show her what else he can pull out of a box.

The Holidays. Everyone got together for the holidays. First, for a rather sad vigil for Syd and later at the various somber and sour parties around town. At least the other children in Salem seem happy. Maybe they instinctively know that Syd actually seems relieved to have a break from her crazy family. No one showed up to the DiMera party. EJ slouched in just to throw the gift his father offered back in his face. Then he went over to Sami and Rafe's where things were nearly as grim. But the Kiriakis family knew how to have a little more fun. Most of the town's unsavory characters showed up. Victor took a break from insulting Chloe and let Viv do it. Brady got righteous and flitted away and even Kate and Stefano popped in. They were called over to be exposed to Philip's latest news – his upcoming marriage to Mel. His two mommies competed for brownie points, but in the end, all the brownie points actually went to Nathan. He filled in for Tom and agreed to read the Christmas story at the hospital's party for children.

Anyway, now on to the spoilers... If you don't want to know what will transpire the next week as they ring in the new year, avert your gaze now and have a holly jolly holiday. Justin attempts to use the wiles he's accrued over the years to convince Hope to give her marriage another shot. Elsewhere, Vivian plots out her scheme to make 2010 the worst year in Carly's life. Now that she knows that her enemy has a child swimming around somewhere nearby, she polishes her opera glasses and gloves to make certain that the suffering will be something the town can recall for years to come. She even fills Victor in on it and he's hardly an easy man to impress. He may be even less amused when Philip takes a forced break from trying to spend the rest of his life with Melanie when he's chucked into a jail cell with Nathan. This might make Nate think twice about listening to advice from Lexi. The DiMera doctor tells the impressionable intern to clarify his feelings, but she should have known better and tipped him off on what feelings should be aired and how. Meanwhile, her brother, Elvis, does some clarifying of his feelings too when he sends Sami a text message to set up a secret meeting, but is it all what it seems? And speaking of secret meetings, Ari continues to be a thorn in Troy's backside as she demands another meeting with Mr. Big.

Have a safe and happy holiday everyone!

Days of Our Lives Video Clip: A...