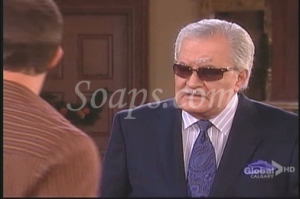 What a week. The big reveal came in good timing, we saw Stefano telling the truth, Vivian stepped up her schemes, and we created the name Ejari, for a possible new pairing of EJ and Arianna. The week went off well, I thought. Let’s break it down.

Stefano was a wreck this week, unlike his usual self. I think it’s genuine. We all know he loves Sydney, and I don’t find it believable that Anna DiMera – the kidnapper- would work for Stefano, her sworn enemy, unless he was giving her something big in return. (She seems to have taken a liking to the tyke, which is a little scary for Sami and EJ’s sake.) Maybe Stefano has promised to bring Tony back to life as he did John Black! (You never know!) I’m up for it!

Both Stefano and Victor are getting older and though they’re still great villains, we’re starting to see their sentimental side. Does that mean EJ’s involved in the kidnapping and not his father? Stefano did say he had nothing to do with the kidnapper while he was on truth serum so does that mean EJ would have instead of kidnapped Syd in order to bring her back to Sami and play Rafe’s part of the hero for a change? Or… is it somebody else, altogether that we’re not even considering? Some might see Kate as a suspect. Perhaps she wants to see Stefano dead, so she can take all that’s coming to her.

I cringed this week during Stefano and Sami’s wee quarrel. Not a fan of Sami and Stefano in the same room, but it did change the way Stefano looks at EJ even more. Family “loyalty” is the most important thing to Stefano and is supposed to be the most important thing to a DiMera. EJ’s now on his poop list, making me wonder why Lexi isn’t involved in this a little more. I almost forgot that she still loves her brother. Aside from her, EJ only has Johnny and when they find her, Sydney. Even Nicole has turned away from him as she grows stronger, realizing that their relationship wasn’t healthy.

Normally, I would wonder why the heck Rafe, who isn’t a police officer or FBI, was helping Salem PD find Nicole and Sydney, but I really couldn’t be happier about it. He’s better at being a cop than any on the Salem PD, so does this mean once Sydney is found, they’ll hire him? Because he has something else to do aside from sit on Sami’s sofa and make out with her, I’m enjoying his scenes and surprisingly, Safe scenes aren’t making me snore anymore. Bradianna has taken over in that department.

Bradianna’s on again, off again romance is starting to wear on me. I no longer have interest in the pairing of these two. I am curious as to what could happen between Ari and EJ. I’m a little disappointed that some of the writing for these two on the pier was similar to Ejami’s writing. Bad boy meets bad girl turned good, bad boy spars with said girl, bad boy gets off on it and bad boy makes bad girl turned good feel compassion for him by choking up over bad boy’s kidnapped daughter. Yawn. Still, I’d rather they got together than the alternative, which is wondering whether or not Save is the future or Ejami is the future or… suddenly, with Lucas’ return, whether or not Lumi should get back together. It all makes my head spin. I asked Ejami fans if they were worried about EJ spending time with Ari, but one fan explained it’ll only make Sami jealous and maybe she’ll show that side of her to EJ, therefore, giving Ejami an opening to reunite. I hadn’t thought of that, but it’s a good point. I figured if they were going to be written as a couple again, the baby bonding would be the catalyst. Whatever happened to Dena Higley’s promise to Ejami fans that they’d be ‘endgame’ in 2009? Way to piss off fans.

Justin should probably take Bo’s advice and get a life. It’s one thing to listen to your friend’s problems and support them but there are boundaries one should not cross! I thought poorly of Justin for running to Daniel to try to sabotage Carly’s career. I don’t want her to ruin Bope either but (they’re doing a fine job on their own of that) that’s no reason to deny the residents of Salem a good doctor. Lucky for Carly that she and Daniel just happen to have some history together. Let's see. She returns to town for her daughter. It's obvious that it's Melanie. She hugs an old dear friend, Daniel. Meanwhile, in an interview Crystal Chappell said she conceived her daugther from some guy at a medical conference. Things are adding up, quickly. My beef with her this week is that she is back in the work field having murdered Lawrence. It kind of puts a damper on her promise to uphold The Hippocratic Oath. Isn’t one of their prohibitions ‘never do harm to anyone’. Next week I'll have an even bigger beef when she admits to Bo how she really feels about him...We won't go there today, but Carly and Bo did do some reminiscing about their past wedding. That would never happen in real life and it did nothing for me. Of course, it showed us that there could be potential for a "Barly" reunion, even if it's temporary. Perhaps if I watched the show when they were together I might care, but I’m a little put out by this storyline to begin with. Have you ever reminisced with your ex over your past wedding while you were married to somebody you were in love with? Bo is already in dangerous territory. Hope, on the other hand, just seems to be obsessed with Carly’s secret. All she does lately is ruminate over it. At least on Friday’s episode she made a great point. She says if Bo was happy, she'd know it and she doesn't think he's happy. He admitted he's not. I don’t know how she could have thought otherwise, but I digress. That should be an indicator that he’s still into her. My advice to her is to move back in before he starts to fall for Carly, but we saw on Friday’s show that they’re pretty much through – or so it appears. Hope won’t trust him and he won’t budge. Stubborn.

The highlight of the week…

Another stubborn person is Vivi. Those flowers she took to Carly at the hospital must have some spy cam in them. Worse, they might be poisonous. The dead body Carly found in a room had a sprig of baby’s breath in her hair. What does that mean? It’s a bit stunning to me. I didn’t expect Viv to take her plan into action just yet. Vivian certainly has a spark of chemistry with Kate, Victor, Philip, Melanie, Carly… even Henderson, who dislikes her! This is the one of the best things the show did this year was to re-hire her, in my opinion. Her scenes with the sunglass sporting Victor are quite comical and made my week! To learn why Victor is wearing those sunglasses, read more about John Aniston’s accident, here.

That’s all that really stood out for me this week. I enjoyed chatting with you in the DOOL message boards while I recapped for the day ahead showing of DOOL, this past week. My last recap of 2009 was Friday’s episode and by the time you’re reading this, I’ll be heading out into the holiday season and won’t be returning until 2010. I’ll be on holiday with family and friends for the season. I have enjoyed bringing these weekly blogs to you all year and hope to see you all back reading them as I write in 2010. Happy holidays! I hope you’re all spending them with loved ones. Cheers to a healthy, happy and successful 2010!

The next two blogs will be brought to you by Matt Purvis, who not only writes news and recaps for Soaps.com, but who also writes for Soap Opera Fan, our sister site. You can read his blogs here.

Ex-Days of our Lives Gloria Loring...