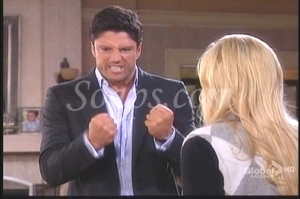 Or is he hotter here? (Soaps.com)

Christmas in Salem has begun. The sets are festooned with wreaths and other seasonal decorations and the Brady’s started trimming their tree. There seemed to be a bit of a ‘moving’ theme this week as well. Carly moved from Bo’s, thinking she’d move into Maggie’s, then on to Salem Inn, but settled back into Bo’s place, while Vivian moved into the Kiriakis manse, EJ and Stefano bickered about who is moving out of the DiMera mansion, and Nicole moved into Salem Jail.

Brady Saga:
Hope and Ciara went Christmas shopping and Bo took home a tree to decorate. Do you think Bope will be back together by the holidays? It seems to me that Hope’s pushing Bo into Carly’s arms by acting with such a lack of understanding about this secret of Carly’s. It’s not Bo’s secret to tell and she should respect that. Of course, Bo is pushing Hope right into Justin’s arms by choosing Carly over Hope – over his family. Inviting Carly to live with him – twice – isn’t exactly helping his marital issues. Justin and Carly’s bickering at Java showed us that there’s a possibility of a partner switch at least for a while. I’m still not buying Bo and Hope’s reason for separating. Something more should have happened for me to find this break-up believable. Hope’s a fighter, but she’s acting more like a shrew these days.

Reunited friends or lovers?
Carly met with her old pal Daniel on Friday’s episode, making the gossip start. Could Daniel be the baby daddy to Carly’s daughter, Melanie? In an interview, Crystal Chappell (Carly) mentioned Carly was at a medical convention and met somebody she had an affair with that produced her daughter. Lawrence learned of this and gave the kid away. To Trent, we presume.

Such impertinence!
Melanie overreacted to Carly moving in to Maggie’s place, as did Mia, but they’re supposed to be 15 and 18, so I can understand the immaturity. Still, Carly merely bumped into Mel by accident. That’s no reason at all for Melanie to hold a grudge! Mia has had nothing but unending support from Carly since they met and is always blubbering about “poor me,” so instead of taking that support, she ditches her? Are the writers grasping at straws? Not to mention that busybody Maggie, who doesn’t mind telling people how she feels, didn’t have a talk with the girls to remind them who owns the house and who makes the decisions around there. At least she apologized to Carly, but why on earth would Carly even want to move in to Maggie’s place, knowing she’d be putting her daughter at risk? At least Hope refuses to move back in, knowing she could put Ciara at risk. This alone makes Carly less likeable.

Underused:
Kate despises Vivian. According to Kate, Vivi’s nothing but a gestation device. I think Vivi’s underused at the moment and that the storyline with her and Victor needs to be on top instead of the baby napping, in order to give fans a break from the monotony of “Baby, baby, where’s the baby?”

The gestation device and her ‘son’:
Philip’s sulking over Vivi’s return. His vulnerability is showing, perhaps to make him vulnerable to Melanie. I believe he cares for Melanie but am not sure if he loves her. He does thrive on competition and he now has it with Nathan, which doesn’t bode well for Mel, not to mention that Philly just came out of a long term relationship with Stephanie. Though he and Steph weren’t a match, I believe he loved her and should take things slowly with women right now! What a joy that Vivi moved in with Victor. Scheming is easier when you share the same manse. I quite enjoyed Victor’s sunglass clad scenes Friday when he sported a black eye and cut over his eyebrow, due to a mishap ice skating with Ciara. See, if he were in Toronto, he could have simply called it skating and we’d get it. It’s cold. A bit snowy and there is no other type of skating going on right now!

Emmy worthy:
Arianne Zuker deserves an Emmy for her work on the show this past year. Even as she was kidnapping Sydney, she had me feeling for her. Don’t get me wrong, I am not condoning any of the lies or the kidnapping. I just understand why she did it. It was a surprise that she apologized to Sami, because she maintains that everything she did was for EJ. We know better. She should be apologizing to EJ for deceiving him and kidnapping his child. I would advise EJ not to hold his breath for that. She’s a long way from redemption in Salem.

Drama queen:
Ari’s quite the drama queen. She’s reminding me more of Sami each day. How long will we wait until EJ becomes interested in her? She misunderstands people’s feelings for others, which irritates me. First, she couldn’t figure out why her brother could love Sami and doesn’t get why Brady loves Nicole, leaving me to wonder if she’s ever been in love. She’s got an immaturity about her and likes to badger Brady. She doesn’t realize it, but she’s pushing Brady right back into Nicole’s arms. The guy is in love with Nicole, so I think Ari would be wise to work on her self-preservation and self-respect. I do give merit to Ari’s suggestion that Brady’s somewhat addicted to Nicole. Sami mentioned the same thing. It’s possible. Addicts can transfer their addiction from one thing to another.

Ball of fury:
EJ has fans swooning over his spells of bitterness and displays of rage. He’s handsome, but abuse doesn’t make me hot, but I'm in the minority, I guess! Almost all of his scenes lately are cringe worthy. I long for the day when Sydney’s back in his arms and he’s happy. I prefer him scheming to screaming. Anna returned this week as Syd’s kidnapper, making people wonder if she’s there due to EJ or Stefano asking her to take care of Sydney. EJ has let on recently that he’s following in Tony’s footsteps, so we thought perhaps he contacted Anna in order to do just that. We’ve seen him make a few private calls to somebody, telling them to be available to him at all times, however, it could be a rouse. Stefano also keeps making these mysterious calls and the last call seemed to go to the surprise kidnapper – Anna DiMera. Anna is a sweetheart and I’m thrilled she’s back, even if it might not be for too long, but I’m not sure at this point if she took Sydney to ensure her safety or if she took her to get back at Stefano or for another reason, entirely. EJ and Sami have concocted a scheme to get Stefano to admit he took Sydney, which makes me again wonder if Anna’s working for EJ, who just wants to get Samanther back. EJami will have to spend loads of time together, which kind of screams ‘Let’s get them together so they fall for one another again. Even Rafe and Roman are starting to worry. I don’t know if this means we’ll see an EJami reunion that was promised or not or if it will be a bump in Safe’s relationship, or if they’re just friends. (PS. EJ looks better to me in the second photo. No yelling!!)

Rafe:
I’ve said it before so forgive me for repeating but Rafe needs to be back in the FBI. I like him when he’s working out problems and either he should be in the FBI or should be consulting with the Salem PD. He gets things done better than anyone else and I don’t really want to see him simply cavorting with Sami.

Recast:
The big news this week for the show is that Dylan Patton was recast with Chandler Massey, giving the character of Will a completely different look. They say it was done for the upcoming storyline, and I don’t yet know what that means! I did like Dylan Patton as Will. He was similar to Lucas. It makes one wonder if Will is going to start acting like his … gulp…mother. Oy.

Selfish!
Wow Chloe’s some kind of selfish. No major surprise since she’s never been a good friend to Nicole, but when she learned Nathan and Melanie broke up, and Melanie left the room, she told poor Nathan he looked as though he needed a friend, and then left! She walked out on him. She could not spare two minutes to ask him how he’s doing and what happened?

That’s all that really stood out for me this week. I’d love to hear what stood out for you this week and what you think about Anna’s return and the ‘Will’ recast! Do you have any plans for the weekend? I’ve only one thing on the agenda aside from spending time in the hot tub. Hanging on the arm of my husband at a wrap party for Resident Evil 4. Hoping for good times and hoping you have a fantastic weekend.

Leann Hunley's Return to Days of our...

Days of our Lives: Saturday Teaser...