Leann Hunley’s Return to Days of our Lives! 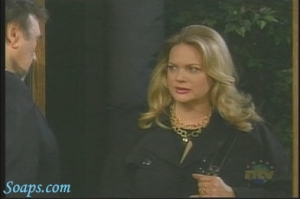 Soap Digest is reporting that Leann Hunley (Anna) has been back secretly, playing Anna DiMera again but with a twist. Though she’s said only to be with us for a few episodes, there may be room for her to stay on once again. Spoiler Alert: It will be revealed that Anna is Sydney’s kidnapper, who first airs Thursday December 10 as a cloaked figure, pushing Sydney in a carriage. Folks can see her face, Friday December 11!

Leann has been a part of the show from 1982 to 1986, and returned May of 2007, only to be let go two years later. She hasn’t been seen since Thursday April 2 2009, when she slapped Stefano and told him off. Here’s the Soaps.com recap to refresh your memory.