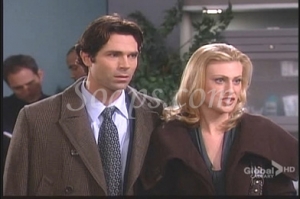 Is it bad news for Mickey? (Soaps.com)

These are the “DAYS” of my week for November 30-December 4:

This week was balanced between love and abuse. We saw a few characters mingling that we don’t often see, such as Bo and Philip and Melanie and Carly and Vivian’s return set off sparks with Philip, finally, which I hope will be explored more. Let’s break things down!

What stood out for me this week is how abusive that Sami, EJ and Lucas can be. We’ll get into Lucas’ behaviour later. Sami and EJ share an affinity for verbal and physical abuse which can be entertaining but usually frightens or annoys. EJ is still living in Stefano’s house after attempting to strangle him and hasn’t even apologized for it. Sami’s barb to Brady about him being off the coke but still addicted to Nicole was hurtful and she never apologized for it, even now that he’s busting his arse to help find her kid. EJ snapped at Brady the whole week, not caring that Brady’s the one man who can get through to poor Nicole and poor Rafe was the mediator this week, the only one with a sound mind. How does he do it? While I’ve always enjoyed the Ejami chemistry, sans arguing, watching Rafe this week made me see that he is perhaps too good for Sami or perhaps the better man for her, even though I don’t see a lot of chemistry there. Between Sami’s hysteria and EJ’s wrath, I didn’t enjoy any scenes with this foursome at the pub. Luckily, these people aren’t the only ones in Salem. I enjoyed the brief return of Fay and wondered if she took her “granddaughter” or if Stefano’s got her, but it can’t be that easy, can it? I’d like to see Fay return if only to partner her up with Roman again.

Did you notice that when Mr. and Mrs. Robinson from the bus terminal, were brought to see Sami and EJ, they had nothing whatsoever to give to the cops in order to help with the kidnapping? Why even bring them on screen? Do they have something to do with it? We’re back to a whodunnit! I’d love to hear your thoughts below on who you think the culprit is!

Here’s another fine mess. Melanie’s feelings for both Nathan and Philly. After being caught almost making out with Philly, she admitted to Nathan that she cares for both men. She’s just not ready to choose. Stephanie’s ready for her to choose Philly so she can get her grubby hands on a suddenly single Nathan. Arianna talked sense into Mel this week, telling her to go with her heart. Oh but wait! She didn’t say that at all. She told Mel to go with her pants, not her heart. What did she say? Mel should be with a guy who turns her on rather than be with somebody who looks good on paper but doesn’t float her boat?! In the midst of this mess, Melanie bumped into Carly, and got scalded by hot coffee in the process. Carly made a lot of weird eye contact with Melanie, making us see who her daughter really is and Mia whined all week and moped about her loss and the lack of a mother. While I feel for her, I think she needs to be proactive. The poor me routine, when you’re watching daily (not to be confused with real life) gets old. Speaking of old…

Did you get the feeling on Wednesday’s show that something is going to go down with Mickey? We haven’t seen him since Stefano and Kate’s wedding, and before that we barely saw him at all. Suddenly, Maggie’s on the phone to him every other day, whispering words of love, while he’s on a business trip. This tells me there’s some disaster about to strike them, making me wonder if Mickey’s longing for Salem or if there’s a miracle about to happen. Either way, it’s making a good story, especially since the photo Maggie was caressing while talking to her hubby showed the past actor who played Mickey, John Ingle. Does that mean he’s returning or was that a blooper? I haven’t bothered to contact the show to find out because frankly, I want to be surprised.

Here’s a surprise. Lucas is back and he’s not quite the same old Lucas. Danloe is back, too. They made their return this week and Chloe got a tongue-lashing from Lucas, the dry drunk, who couldn’t wait to get home and make amends with Will, then rush over to Chloe to bash her for telling Sami’s secret to Nicole. Before I could point out to him that he betrayed Sami first, he figured it all out on his own and admitted to Maggie he felt responsible for everything. He’s a new man! That’s good to see, considering we had to see his old snarkiness at the hospital with Dr. Dan.

Dr. Dan: "Lucas, have you ever heard of a dry drunk? That's what you are."

Lucas: "Have you ever heard of an SOB? That's what you are." It made me smile and shake my head because it’s classic Lucas, who has the worst wit. I almost expected Lucas to get all up in Doc Dan’s face, thumbs in his ears, and start singing, "Nah nah nah nah nah nah!"

Vivian and Victor were seen bird watching around Salem while they caught up. When she met Philly, she went nuts as any surrogate mother who stole the embryo from Kate to have it implanted inside of herself would but Philly wants no part of her motherly love. Perhaps he should take it. After all, he’s not getting any or willing to take any from Kate. Kate meanwhile, doesn’t like Vivi’s return and Vivi thinks both Kate and Victor are jealous of one another. Vic’s son, Philly, was seen at his brother’s house this week, trying to make sense of Viv’s return but didn’t get a lot of input from Bo, though their scenes together were a lot of fun as were his lines. (Philip: "I guess I just need someone to tell me the sun will come out tomorrow and everything's coming up roses. I also need to hear it's darkest before the dawn.") Instead, Nathan gave him a piece of his mind and that got Philly really going. I wouldn’t be surprised if he pops the question just to get Nathan away from his lady.

Nothing else really stands out for me this week, so that must mean I’m on my way out to a fabulous birthday weekend! Spending all of this glorious birthday money that keeps coming in, relaxing in the hot tub and going on set of a movie being shot in Toronto. That’s my weekend. What are your plans? Are you preparing for Christmas? Have you seen the new Christmas Carol flick with Jim Carey?