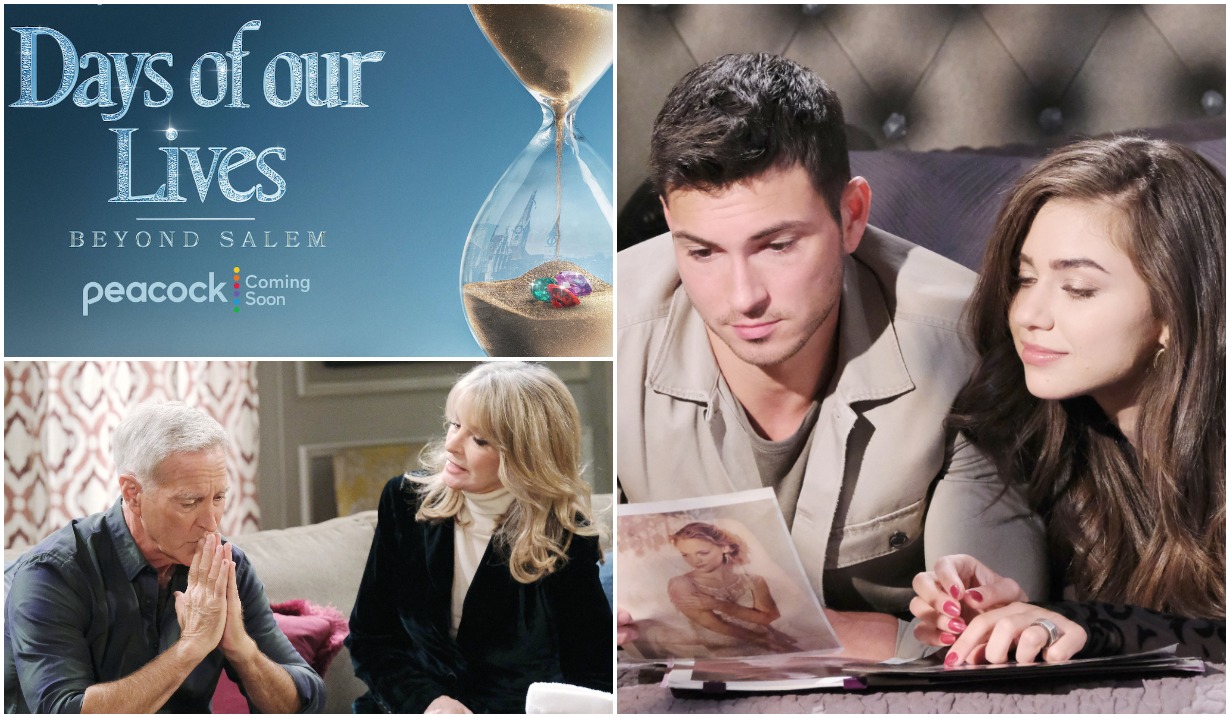 The new soap serves up mystery, romance and adventure on Peacock.

Days of Our Lives created quite the stir last month when they announced their Beyond Salem spinoff. Now, whether you’re looking to find out what it’s about, who’s in it, when it will air or how to watch, we’ve got you covered!

What It Is, When It Airs

Beyond Salem is a five-episode limited series written by Days headwriter Ron Carlivai and his crew. According to Entertainment Weekly, episodes, which will only be available on Peacock (more on that in a moment), will drop Monday, September 6 through Friday, September 10. As the title implies, much of the action will take place in far-flung environs as several Salemites find themselves doing a bit of traveling for various reasons.

Who’ll be going where? Well, Ben and Ciara head to New Orleans for a little romance, while John and Marlena jet off to Zurich. Closer to home, Chad decides to visit Will and Sonny (who earlier this year relocated to Phoenix, Arizona), while Abe, Paulina, Lani and Eli seek out a little fun in the sun down in Miami.

As seen in the Beyond Salem promo, the story begins with our heroes spread out around the globe but they’re soon united by the search for stolen gems which could threaten the future of both their loved ones and their hometown. (Get more spoilers here.)

Where there’s mystery, you’ll usually find the ISA… and in this case, the crime-fighting organization will be represented by Billie Reed. And yes, that means Lisa Rinna (The Real Housewives of Beverly Hills) will be on the case.

But Rinna’s won’t be the only familiar face making a return. Among those slated to appear are Charles Shaughnessy (Shane), Thaao Penghlis (Tony), Leann Hunley (Anna), Christie Clark (Carrie), Austin Peck (Austin), Greg Rikaart (Leo) and Chandler Massey (Will). Viewers can also expect Zachary Atticus Tinker (ex-Fenmore, The Young and the Restless) to take over as Sonny from Freddie Smith, who previously shared he would not be returning to the NBC soap. And while he won’t be playing a returning character, The Young and the Restless alum Peter Porte has joined the cast as an ISA agent.

One unexpected return is that of Eileen Davidson, who confirmed to Soap Opera Network that she is playing Kristen (most recently embodied by Stacy Haiduk) in the limited series. As for whether or not she’ll be reprising her other Days of Our Lives alter egos, like Sister Mary Moira, Davidson said, “You’ll have to watch, but I mean it would be sad to miss an opportunity to actually be able to bring out the other girls, you know what I’m saying?”

Days harkening back to its 80s roots of love and adventure seems like enough reason to tune in but after seeing Penghlis’ fun behind-the-scenes shots, we’re all the more excited, especially as he teased, “These beautiful women can be such trouble. You won’t believe what they’re up to.”

How You Can Watch

The limited series will only be available in the U.S. via NBC’s steaming app, Peacock. Earlier this year, NBC made Peacock the exclusive home to Days of Our Lives second-run viewings. In the past, the soap had been available via the NBC app, NBC.com and other venues. But as of July 6, Peacock became the exclusive streaming home of the serial and, by extension, its spinoff.

The good news is that signing up for Peacock is easy and free. There are, of course, options which allow access to exclusive and premium content ($4.99 a month), as well as an option to watch most shows and movies without commercials ($9.99 a month). For more info or to create your Peacock account, click here.

Per ET Canada, Canadian fans will be able to watch Beyond Salem on STACKTV and the Global TV App beginning September 6, with episodes to eventually air on W Network.

Will you be tuning in to Beyond Salem? What are you most looking forward to? Tell us in the comments and then relive Days’ long history of love and romance in the gallery below, jam-packed with photos of past supercouples (and a few not-so-super).