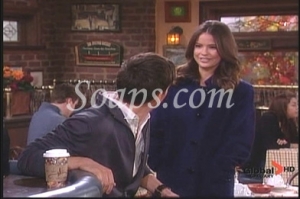 These are the “DAYS” of my week from November 2-6:

The theme this week was obvious. “Partner swap!” Well, maybe I wouldn’t go that far but we did see some interesting drama with new couples, ex-couples and potential couples that I must touch base upon. My theme could be called ‘possibilities’, or ‘potential loves’.

Melanie fantasized about Philly and made out like mad with Nathan. We saw Nathan and Stephanie sharing a victory hug when Nathan saved a life. Again it occurred to me that they really are more alike and better suited than he and Melanie. Though, one could argue that Philly’s not good for anyone right now, and Nathan’s more interested in his job, so maybe Brady’s advice to Mel to stay alone has some merit! Mel’s friend Brady shared a moment with friend Nicole where Nicole actually wanted to help somebody other than herself when Brady needed it. Bricole fans wondered, “Is it their time, now?” Then, Nicole and EJ kissed. That was a surprise and I admit I really liked seeing it. It reminded me that at one time, before the lies, they were really hot together. This was when Nicole was strong, you know, before the writers crucified her character and made her the weak female. Sami and Rafe reunited, declared their love for one another again and had sex, and then Sami and EJ put their differences aside, Sami apologized for keeping Grace from him and he told her he couldn’t stay mad at her. This gave Ejami fans cause to celebrate a potential reunion between these two. Last, Arianna and EJ met and EJ seemed intrigued by her. Yeah, I’d say she’s his type, however I saw no chemistry so far. Still, this is exciting considering she’s not Sami or Nicole!

I have always wondered if we could get a Roman/Ari pairing, or perhaps if Justin and Hope will grow closer… so many possibilities and we’re still not 100% sure who will end up with whom, but it’s interesting to see the dynamics this week, between the players.

Curious:
Why does the show always put Stephanie in that blue coat? Why is she wearing a coat like that when nobody else is wearing a heavy coat? Why do I care? Do you care? It’s just unusual!

Bo’s a cop, the Police Commissioner in fact but when an old flame shows up on his doorstep, he can’t turn her away. Is he a cop with the heart of gold or cop with the brains of mush? His confrontation with Hope about Carly, outside his house made me feel as though I was eavesdropping on an intimate moment by watching. I wanted to walk away and truly, for once, had no side. On one hand, Hope is right. He’s putting his family’s life in danger and he’s the police commish and harbouring a fugitive, which means he could go to jail. On the other hand, Hope’s living in a criminal’s mansion. This is the same mansion that Stephanie was abducted from a few months ago!

Carly’s story is horribly slow to come out and I don’t see any chemistry between her and Bo. Other than rehashing all week, we’ve learned she’s protecting somebody. Nicholas? Is this who Lawrence said she’d never find? And who was it who called in the tip about Carly being at Bo’s place? Was it Justin? Hope? Vivian? Another mystery! Maybe Carly’s scenes will be less stagnating in jail. Or better yet, when Vivian arrives in Salem!

Hope told Justin Ciara was angry with her for taking her away from her home and her father, so why not take her back home? Stubborn much? Well that idea is out the window now, anyway!

Safe fans deserved more respect:
I abhor Sami’s lack of self-esteem and self-respect, though sometimes she surprises me and shows confidence and dignity. Not in this case. Bear with me Safe fans… Sami and Rafe had broken up before he left, and she was thrilled he returned, because not only is she in love with him but she was worried about him. I get that, but I don’t get that she’s willing to jump into bed with him, with no explanation of where he has been or what he has been up to. I detest that she feels so proud of herself that she didn’t get the answers to those questions. As if it’s a good thing to be blind. A little self-preservation is in order. Perhaps if she knew the meaning of the word proactive, she’d have stopped things before they got that far. I found that pathetic and it ruined their reunion for me. To me, it disrespected their relationship and I’d rather have seen them make out but Sami pull away and wait until things were on a more steady ground before jumping in the sack. After all, this isn’t just a one night stand. For me, that’d be much more dramatic and romantic. Some of you will disagree because everyone’s idea of romance differs. My brain has to be involved to be romanced so if it were me, I’d demand answers before jumping into a possible disaster.

EJ’s breaking point:
The baby switch storyline has fans anxiously waiting to see the end, to see less of an unstable EJ and less of an undignified Nicole. It feels to me as though we’ve got to be in for a few more twists. EJ’s becoming unstable, which is scary for a level-headed mobster type who is always in control of his life and those around him, but with Sami and Nicole’s lies and manipulations, not to mention Stefano siding with Nicole, (soon, he’ll find out) he is nearing his breaking point. Word is there's a twist coming, too. Oy!

Confusing with Bradianna:
Considering the show hired Eric Martsolf’s(Brady) ex-co-star, Lindsay Hartley as Arianna, in order to get the right chemistry going between Ari and Brady, as they had with Ethan and Theresa, I’m surprised they’re not simply putting them together and giving them obstacles to overcome in the relationship instead of automatically having the two break up ala Rafe and Sami. Instead, it feels as though they’re leaving Brady open for a triangle between Nicole and Ari or Ari open to be with EJ.

Philly put me off? No, it’s true!
Though you all know I want a Phelanie coupling but I was a little put off by Philly when Mel visited him at the manse. He acted more like a mob boss - arrogant, instead of somebody who was truly going to wait for Melanie to make up her own mind. Where is that sensitive, loving side he has shown in the past? I’m concerned that this side of him will push Melanie away.

Calling Lucas:
Once again, I was happy to see Lucas popping in to talk to somebody on the phone. This time he gave his son advice. Though it was brief, it makes me happy for a return.

Child abuse:
Nicole and Stefano are abusing poor Mia. It’s truly disgusting. I find myself wanting Nicole to get hers soon, whenever I see poor Mia lie for Nicole. I also found Sami’s venting to Mia to be cruel. "Don’t you dare start crying," she told Mia. Excuse me but Sami’s the weepiest woman in Salem. She of all people should understand that when confronted, sometimes emotion leaks from our eyes. I hoped Mia would pull away from Sami after this but no…she accepted Sami’s luke-warm apology. It was all too much for me!

Victor flummoxes me:
Victor wasted no time in telling Brady that Ari was a drug dealer, and smiled after Brady left to confront Ari. That doesn’t seem like a man who puts family above all. Why would he be happy to give Brady this news? He seemed almost proud to tell him. I get that he doesn’t want his grandson to be with a drug dealer but couldn’t he consider Brady’s feelings for Ari? Then he did a 180 and surprised me by being so adorable when he told Hope to go see Bo and not to hurry back! The two sides to Victor!

I think I’ve exhausted all of my thoughts for this week and invite you to share your own. Agree or disagree, remember, this is all in fun, it’s just a TV show, and we’ve all got different ideas based on our own personalities. I’d really like to know your thoughts about some of the possibilities for potential couples? Have you taken my new Days of Our Lives Couples Poll? The results so far are interesting!

Have a fantastic weekend, everyone. I hope those in the cooler climates such as mine (Toronto) will stay warm. I’ll be alternating between being relaxed in front of the fire place and jumping into the hot tub with friends. No huge plans this weekend for me! What will you be doing?

Days of our Lives Couples Poll!

Happy 44th Anniversary, Days of our...