When Days of Our Lives’ Gabi Returns to Salem Next, She Could Blow Jake and Kate’s Deepening Relationship Sky-High — Here’s How 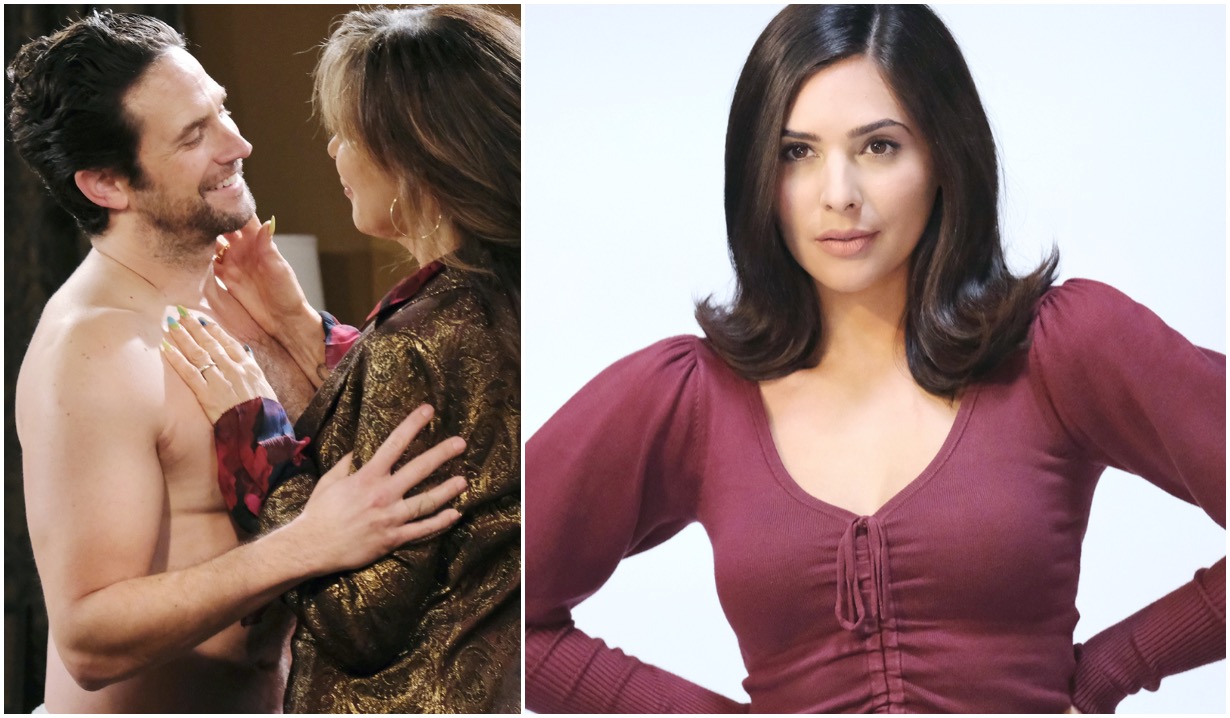 We’ve got it all worked out. Whether headwriter Ron Carlivati does remains to be seen.

To put it mildly, Days of Our Lives fans were miffed when Camila Banus’ return as Gabi began and ended in the blink of an eye. And we get it. Salem without the pot-stirrer is like a pot of coffee without caffeine: virtually pointless.

But — maybe you’ve read — the actress is coming back very shortly for the long haul; that pop-in was just the appetizer course, the entree is still cooking. And we know exactly the drama that we’d serve up upon Gabi’s next comeback. 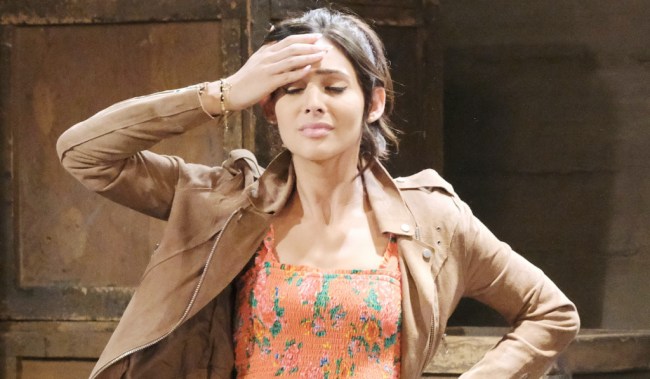 “What? Soaps.com is going to write my next chapter? What have I done to deserve this?”

First, we’d wait until there was a big to-do, like a wedding or a party or laundry day, and have the vixen make a grand reentrance dressed to kill. And yes, even laundry day calls for high fashion. As Banus noted during her recent Day of Days Q&A with leading man Brandon Barash (Jake), Gabi “doesn’t care if she’s going to go to the grocery or to drop off her daughter at school… she needs to look fabulous — and she does.

Second, we’d have Gabi accessorize her to-die-for outfit with a new man. We’ve already hypothesized about a certain Daytime Emmy winner who’d work wonderfully opposite Banus. But he’s by no means the only fella we’d consider casting, not when there are talented hotties like Jason Canela (ex-Arturo, The Young and the Restless) and Mark Lawson (ex-Dustin, General Hospital) out there. 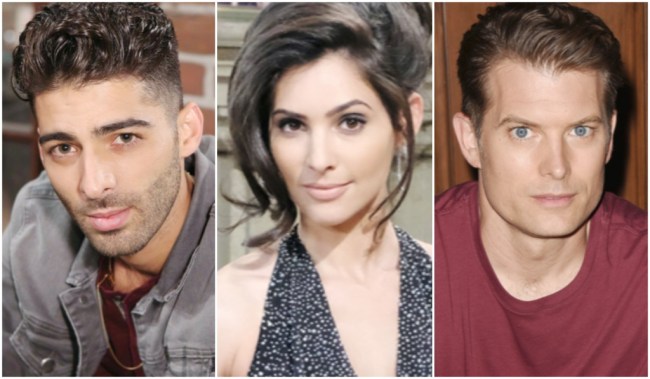 “I take back what I said in that earlier caption. Now then, I can’t have them both?”

But who plays the part of Gabi’s new man is almost beside the point. Why?

In our story, Gabi would already be pregnant by Jake. We know, we know that’s not supposed to be possible. But if The Young and the Restless’ Victor was able to keep siring offspring after being harpooned in the groin — harpooned! in! the! groin! — anything can happen. So let’s just accept that Gabi could miraculously have a bun in the oven, shall we?

Regardless of the unlikelihood of that turn of events, no way, no how would the mother-to-be push Jake’s new lover Kate out of the way and throw herself at his feet, begging him to give their baby a daddy. Gabi has her dignity, thank you very much. So she would do the mature, sensible thing.

In other words, being Gabi, she would pass off the kid she was carrying as her new fella’s, then cut him out of the picture and raise Arianna’s brother or sister alone. He’d be in on the whole cockamamie plot. And it would work, too. Or it could… except for one thing.

As any straight guy would, Gabi’s faux beau would fall head over heels in love with her. At first, she’d be like, “Um, stick to the script, bro.” But he’d be handsomer than she’d at first noticed and sweeter than she’d initially appreciated. On second thought, she’d have to be like, “Hmm… ”

Unfortunately, at least for him, when Gabi went into labor at Jake‘s garage — what, you didn’t think she was going to stay away from him, did you? — she’d blurt out in her delirium that he was the palooka who should really be passing out cigars.

In the aftermath, Gabi would forget all about what she’d admitted to Jake as she was about to lose consciousness on the garage’s hard, cold floor. He, on the other hand, wouldn’t be able to forget it. How could he? So although by then he’d be seriously in love with Kate, and the rare person who enjoyed rather than judged her, he’d let her down gently.

“This isn’t what I thought it was,” he might say. “You were just so different from anyone I’ve ever been with, I didn’t know what to make of you. 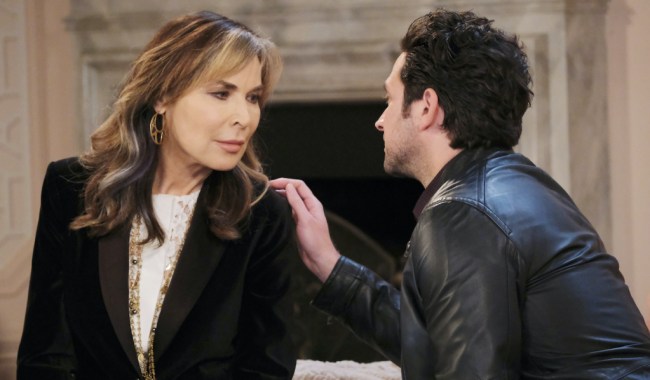 “I’m not chilly, Jake, I’m just newly inspired to give you the cold shoulder.”

Crushed by Jake’s lie, Kate would slink off to lick her wounds (perhaps bending Jack’s ear in the process?). Meanwhile, Jake would set in motion phase 2 of his plan.

It wouldn’t feel right. What the hell was going on here?!?

By then, Gabi would have given in and given her heart to the boyfriend who was only supposed to be “for show.” She’d been all in where Stefan’s brother had been concerned. But this guy… apparently, she’d chosen really wisely when she’d picked herself a make-believe babydaddy. He was good with the tot and even better with Gabi.

So she’d reject Jake’s advances, a sure sign of the evolution to which Banus referred during her Day of Days interview. “A couple years back, I think I did a lot of growing in my life, and I think that made the character grow as well,” she theorized, “kinda matured her like I was maturing.”

You can watch the whole chatfest below, by the way.

The Moment of Truth

Of course, Jake wouldn’t be able to throw away the idea of forming a family with his child and its mother. So on the day of Gabi and Mr. Right’s wedding, her onetime lover would stand when the preacher asked if anyone knew of a reason why the couple shouldn’t be married.

“I do,” Jake would say, echoing the words that he so badly wanted to utter. “Gabi belongs with me. So does our son.”

More: Who’s returning to Days for the holidays? [PHOTOS]

New guy, by the way, would also be able to change the oil on a car. That’s a key characteristic that we thought we should throw in here. 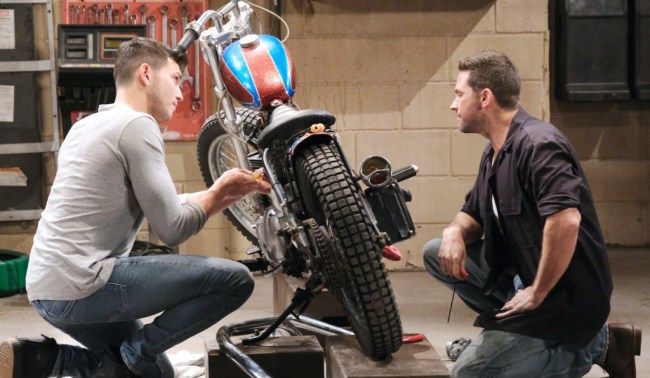 “I dunno, Jake. I feel like the birthing suite sends a mixed message about the garage.”

After the Dust Has Settled…

What would happen next? We’ll leave that up to you in the comments below. But we also hope you’ll let us know what you think of the comeback story that we have in mind for Gabi. Wouldn’t you watch the hell out of that? While you’re here and pondering the possibilities, check out the below photo gallery of Gabi’s wild life thus far and try not to focus on how it will pale in comparison to what we envision for her.

Days of Our Lives Weekly Preview:...

Days of Our Lives’ Deidre Hall...