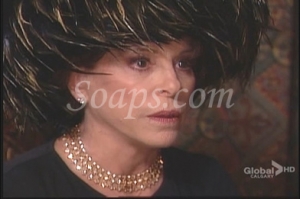 The heat is on. (Soaps.com)

I found the week to be worthy of viewing but I had issues with practically every character and with some of the writing. I’ll give you fair advance that what you’re reading is more of a rant than I’ve had in a few weeks! Let’s break it all down.

To start off, I want to touch on the amount of flashbacks seen this week and the fantasies. I’m not a huge fan of fantasies when done weekly. Rafe’s constant Sami fantasies are annoying to me. They don’t work well when one happens to know what’s to come for the next month. They’re better served for fans who don’t read spoilers. It’s important to show flashbacks in the Carly storyline, but I could do without seeing the same ones repeated. We’ve learned very little in the time she has been on the show.

The Carly storyline is officially a flop. It went from exciting to tepid, swiftly. Let’s hope that Vivian’s return (the best part of the week) can save the rest of it. We can be happy that Omar is gone and that they’re off the boat but I’d have liked more of an explanation as to why Rafe needed antibiotics and why he couldn’t speak while he was on the boat, except to say “Sami…Sami…Sami,” but as soon as he got to Arianna’s place, he could talk up a storm. When viewers are confused and not given the full story, they lose interest. So what’s wrong with him? Is it just the bump on the head? He now knows that Stefano wants to off him, so it’ll be interesting to see him get around Salem basically marked for death. Same as Carly. Not only does Vivi want Carly dead, Hope might want that as well, once she finds out exactly who is horning in on her territory and that Bo is lying to her about it all.

I really liked that Carly seemed to be the type of strong, no-nonsense woman that soap opera writers don’t usually write for. I was wrong. She’s just another abused woman that the soap writers seem to enjoy writing. She deliberately ran to a man – Bo, because she knows he’s a good person and can help her with her murder rap, then whined about being a burden to him. She has zero personality because she was abused by Lawrence and has lost her sense of self, and while it was good to see Carly break down about what she has done, it didn’t work for me. Also what doesn’t work for me is her crying self-defense, when the flashbacks appear as though it was manslaughter.

Another whiner is Nicole, who I’m at my rope’s end with. November 12 can’t get here soon enough for me. I’d prefer if the show would try harder to conceal Arianne Zuker’s pregnancy, considering Nicole’s not pregnant. I’d rather see a few large purses, and flowers strategically placed over her abdomen, rather than see Nicole in flowing shirts that make her burgeoning belly obvious and take me out of the story.

Stefano was in rare form this week, flirting with Maxine, which was fun. Kate popped in for a millisecond and their banter was cute. I could have done with seeing more of that. I was a little insulted that they used the same joke two days in a row with Stefano pressing that call button in order to get rest. Reminds me of sitcoms that I have contempt for. Moving on, Sami and Stefano’s scene at the hospital was non-entertainment. It made me hate Sami again, just as I did when she was in the safe house. There is no need to have a character make people cringe. Her voice grated on my every last nerve with that rant and during the recap I got a headache. The only reason I can think of as to why it was written is to show how Sami is still very sensitive over Grace’s passing and because of Nicole “appears” to be going through something a little similar, it’s pushing her pain to the surface. Thankfully, Stefano’s amusing calm saved me from running out into traffic. He was spot on to tell her that she had spunk like Marlena but didn’t have her class. (There’s an understatement.) He did go too far telling her that it was fitting she go home to an empty crib, especially knowing it’s partially his fault she doesn’t know Sydney’s her kid. The thing is, she went into his room, knowing what she was in for. It’s not as though Stefano likes her! Then, after all that, why did EJ feel the need to go to Sami’s house and berate her once again for having a screaming match with his less than innocent father? He is a glutton for punishment and I smell a breakdown on the horizon. I can’t wait until Arianna turns EJ’s head. Sami who?

In my poll of the week, I asked you if you felt Maggie was being too old fashioned about Melanie and Nathan showing a public display of affection at home and 69% of you agreed with me and said, “Yes, (she’s being too old fashioned) it’s not like they’re children.” I got a kick out of seeing Lucas tell Maggie to butt out of Nathan and Melanie’s lives. His delivery was classic Lucas and Maggie deserved it – the busybody! As well, it was good to see Lucas focused on something else other than what one of his flaky women has done to him. Gee, didn’t I say something similar about poor EJ’s flaky women, recently, who will be the death of him if he doesn’t get a break from them? Anyway, back to Lucas. I hope when he returns to Salem that he has turned over a new leaf and isn’t going to get involved with anymore bimbos. Instead, I’d like to see him stronger.

Let’s talk about Nathan and Melanie and that whole triangle. There’s certainly a difference from Nathan to Philly and has to be in order for Melanie to be torn between them. Nathan manned up and decided to move into Lucas’ home, which is perfect for Lucas, who will have a roomie and perfect for either Nathan’s relationship with Melanie to flourish or for Philly to take advantage of Melanie’s freedom. We’ve already seen the latter happen. Philly has never been one to step-aside and when he thought he had an in, he was all over Melanie like a cheap suit (and I loved it) and clearly, she’s irrevocably in love with him. I believe that he does care deeply for her but I think he has a lot of growing to do before he settles for anyone, especially so soon after his engagement broke off with Stephanie. This will give Melanie time to do what she thinks is the right thing to do by being with the good boy instead of the bad boy! Course, the problem is, you can’t help who you love and when in love, your feelings don’t go away that quickly. I’m enjoying the ride with this and still hope for a Phelanie pairing, even though Corday has said that’s not likely to happen. The show doesn’t seem to know what couples will work together or which couples the fans want together. Both couples could be good pairings. The differences are that Phelanie is clearly steamy and sexy while Nathan and Mel’s relationship is luke-warm, PG 13 and a little less sophisticated.

Note to Nathan: When your girlfriend asks you to make out, instead of questioning where it’s coming from, take her up on it! Don’t borrow trouble and don’t make her have to drag you into the nurse’s lounge!

I’ve seen comments on the message boards calling Chad an immature idiot. Posts such as that make me realize that we all watch our shows differently. While some of you watch blindly, I analyze behaviour of each character and sometimes find I can learn a lot about what’s to come when I do this! So many seem to dislike Chad. That means that both the show and Casey are doing a good job portraying a teenage father, and that people aren’t putting themselves in the character’s shoes in order to learn more about them. Chad’s 16, has had about five minutes to adjust to learning he’s a teen father and his ex-girlfriend kept the truth from him for over a year! Mia has had 9 months to adjust to Nicole taking Sydney and she waffled many times over! EJ is the one person who understands Chad’s anger and irrational behaviour. Chad also might be more spoiled, but it’s difficult to tell, considering what little we know about him. I don’t think he is, considering he not only works part-time (mostly that’s to get close to Mia) and that his parents sent him to boot camp when he was misbehaving. Spoiled teens are usually not cared for like that. Just saying…

I look forward to seeing more of Vivian next week and watching her get together with Victor, in order to get rid of Carly. You know it’s going to happen! Victor’s all about Hope and Bo staying together and Auntie Vivian knows Carly murdered her nephew. Look out!

Also look out for all those ghosts and ghouls this weekend while you’re celebrating the best time of the year - Halloween! I hope you’ve a chilling weekend planned as I do and if you’re on Twitter, follow us @soapoperafan for soap news, updates, and a few teasers!