Days of our Lives Songwriter Jd Webb Talks to Soaps.com 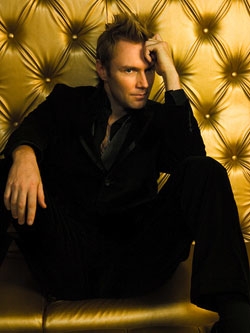 I recently had the opportunity to speak with Days of Our Lives songwriter Jd Webb about his upcoming holiday album, his recently released solo album and the songs he creates for the NBC soap.

Jd called while in the middle of mixing his Christmas album, “Home for the Holidays.” When I asked how it was coming along, Jd admitted, “Well, the truth is, until we got to the mix it was going really well. We decided to have a few different producers and they’re in different parts of the country, so getting the mix together has been a bit of a challenge, but it’s coming together and I’m in the home stretch, so I’m really excited.”

Of what some of his favorite songs are and what you can expect on the album he shared, “On this album one of my favorites is, I did “Joyful, Joyful” meets “Joy to the World.” It’s like a really cool arrangement; it’s got like a funky soulful gospel feel to it. I’m loving that. We did a really cool arrangement of “Silent Night” and kind of flipped the vibe for the verses so it’s really heartfelt and from what I’m hearing from people, it’s their favorite “Silent Night” arrangement that they’ve heard. It’s really cool and the string arrangements are great and then the original songs are really fun too.”

Not only has he been working on the holiday album since May, but he has also been busy with his solo album, “The Introduction,” which was released on August 25. In addition, he has been touring and promoting his single “Big For Me,” which has been on the radio for the last few months and is breaking into the Top 40.

If putting two albums out in one year isn’t enough, Jd has also regularly worked on Days of Our Lives, providing the soundtrack for all the love and drama in the afternoon over the past four years.

Curious as to how the process worked, I asked how often Jd contributed songs and if it was a fulltime job. “It can very much be a fulltime job,” he replied. “It’s very different; you never know. Sometimes I’ll do one song in a week, or one song in two weeks, and sometimes I’ll do seven songs in an afternoon, so it totally varies. It’s really great coming as a songwriter because you work completely backwards from what you would normally work. As a songwriter, it’s whatever inspires you when you’re working on your own stuff, and this, it’s like, ‘Here’s a topic. Here’s what it needs to be about and it needs to be this kind of style and this genre.’ So it’s been a great challenge as a songwriter to write from almost like a backwards perspective.”

Having watched Days as a child, Jd recalled, “It’s cool how it’s all come full circle because that was the [soap opera] my mom watched when I was a kid so I knew all the characters and I remember as a kid hearing songs on the show and thinking, ‘Wow! It would be so cool to have my songs on that show.’ And so to see it come full circle is pretty cool.”

Upon being asked if he had a favorite couple, or one that he found was easier to write for, Jd replied, “No couple that it’s easier to write for, but there have been certain couples that I'll watch the scene that we did the song for and I’m like, ‘Whoa!’ Because there’s this one couple that every time we write, they have just a crazy sex scene and they’re always pushing the envelope." He then humorously recounted, "I went to Texas to visit some of my family members and I’m like, ‘Hey I think one of my songs is going to be on the show today.’ And like my grandparents and my aunts and uncles were all sitting around watching and it was the most graphic sex scene that I’ve ever seen. I’m like, ‘Hey. Cool. So, here’s what I do.’”

If you couldn’t guess, the couple he was referring to was Chloe and Daniel.

As for where he gets his inspiration for writing his original songs, Jd explained, “I get very inspired by anything from life circumstances to, I love to go and people watch; I’m a people watcher. I get so inspired by watching how couples interact and creating a story from these people that I don’t really know. I love how stories can work that way. I like to go to Third Street Promenade (in Santa Monica, CA) or Venice (Beach, CA) and just watch people and there’s all kinds of, it’s such a melting pot there that there’s never a dull moment.”

If you’d like to experience some of Jd's solo music, you can purchase “The Introduction” on his website, Amazon, or iTunes. As for his Christmas album, “Home For the Holidays,” you can look for one of the singles on Jd's site and iTunes now, and then the entire collection will be available after Thanksgiving on iTunes, CD Baby and Amazon.