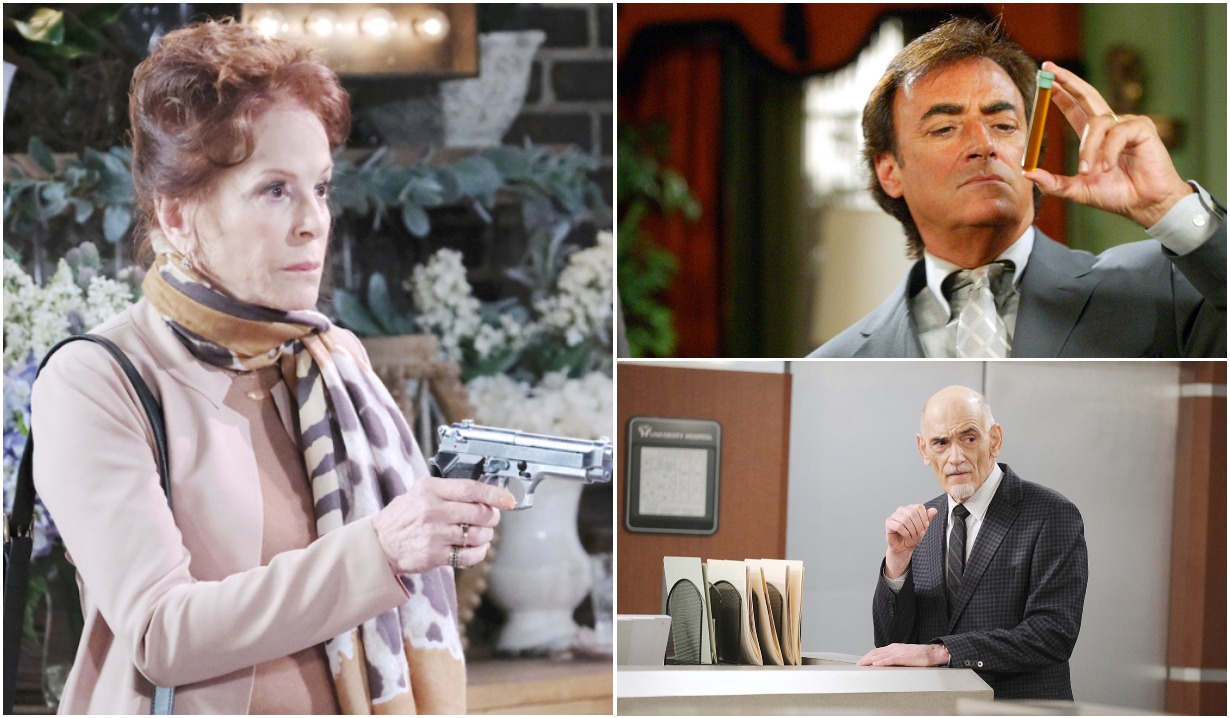 From annoying, nail-biting toxic girlfriend of Jake Lambert to villainess, who the heck is Gwen, and what’s her endgame?

Gwen Without-a-Last-Name (Emily O’Brien) has been lying since she suddenly showed up at Bayview mental hospital, and told fellow psychiatric patient Claire Brady (Olivia Keegan/Isabel Durant) a whopper about hiding out from her “abusive boyfriend.” She claimed not even to be “crazy,” but now that we know her better, that’s debatable! She has told anyone who will listen that she’s skint. She has no money, and no place to live, but is she fabricating that as well to manipulate people into feeling sorry for her? It seems like it.

We recently wondered if it was possible that Gwen was the one drugging Abigail, and a few days later, it shockingly turned out to be true, which is why it’s not a stretch for us to wonder about these six characters who might be the reason behind Gwen wanting to destroy Abigail DiMera (Marci Miller) or Abby and Chad’s (Billy Flynn) relationship.

Who would bankroll Gwen? It wouldn’t have to be somebody she knows. Maybe she just needs cash and doesn’t mind getting her hands dirty. She is a golddigger. Or perhaps she’s related to somebody from Salem who has a score to settle with the DiMeras. Maybe nobody’s bankrolling the bail-biter, and just maybe she’s just some random person with her own agenda. But we don’t think so. This is Salem. Nothing happens randomly.

We know from the Days of our Lives spoilers that Gwen’s about to become Chad and Abigail’s nanny. Mary Poppins? It gives Gwen a way to stick around the house, to drug Abigail and watch over whatever else she wants in what’s often referred to as “The House of Usher.” It’s interesting already that Gwen knows the secret tunnel from the upstairs mansion down to their rinky-dink “livingroom.” But what does all of this mean and what’s her endgame? Take a look at the gallery of who we suspect is bankrolling Gwen, and if you are looking for more scoop about Days of our lives, feel free to sign up for Soaps.com’s newsletter which is delivered for free to your inbox once, daily.

<p>Gwen conveniently has no last name. She was nervous about drugging Abigail but went through with it. Just who is Gwen and why is she drugging Abigail? Gwen appeared for the first time at Bayview sanitarium with Claire Brady who just happened to be from Salem, where Gwen’s boyfriend lived. Is that a coincidence or was she stalking Salem or Salemites before she even stepped foot in the town? Is someone bankrolling her to do damage to the DiMera family or just Abigail DiMera? How does Jake fit in  – does she truly have feelings for him or is she using him as a cover? So far we know for sure that Gwen has an agenda that has to do with Abigail and Chad. She lied about Jake being abusive, she told everyone that she’s penniless, and yet, she was at Julie’s Place drinking champagne. </p>

<p>Does this photo look familiar? Andre DiMera had many secrets in his life. Gwen drugging someone for personal gain reminds us of Andre. Could it be that Gwen’s Andre DiMera’s daughter? Maybe she has come to Salem to pay Abigail back for killing her father. Possibly she really doesn’t have money and is using Jake’s for that champagne at Julie’s Place.  </p>

<p>Why not add to the list of Stefano DiMera’s <a href="https://soaps.sheknows.com/gallery/photos-dimera-family-days-of-our-lives/stefano-dimera-toasts-days-ps/" target="_blank">ever-growing list of kids</a>? Days of our Lives does this all the time. It could be that Gwen is Stefano’s spawn and came upon hard times only to want to take what she thinks is rightfully hers. Vivian could be bankrolling Gwen but not Stefano. I mean, perhaps Vivian Alamain sent Gwen to Salem and she’s Stefano and Vivian’s daughter. Heck… so many possibilities. </p>

<p>Like Stefano, Vivian Alamain’s starting to have kids come out of the woodwork and she’s a woman! She just learned that <a href="https://soaps.sheknows.com/days-of-our-lives/recaps/570714/sworn-enemies-gabi-vivian-team-up/" target="_blank">Jake Lambert is Stefan’s twin</a> and that her trusty sidekick – or past sidekick who is now her equal – Ivan Marais knew about the twins and left the smaller, and sick one behind, thinking he had died. Maybe Gwen’s another of Vivian’s kids – maybe Vivian sent Gwen to Salem to keep Gabi away from Jake and to get Chad away from Abigail, so it would be easier for Jake to take over DiMera and the house entirely. Hey, it’s Vivian. Anything is possible! She’d have the cashflow to give to Gwen to keep her in champagne, but pretending she’s broke.</p>

<p>Dr. Wilhelm Rolf has been the mad scientist on Days of our Lives for decades, a man who knows how to get things done and worked for the dastardly Stefano DiMera. We’re not sure if Rolf taught Stefano a few things about being a bad guy or if Stefano taught Rolf, but they were two peas in a pod. Dr. Rolf had a past beyond science, so why not consider that he could be Gwen’s father? But…why on earth would he send Gwen to the mansion? Perhaps he wants to ensure Jake doesn’t take over at DiMera and that Chad stays in power. Still doesn’t make sense? We’re not sure about this theory either but often things unfold and seem to make perfect sense. </p>

<p>We only add Jack Deveraux to this photo gallery because of Gwen’s British accent. We remember that Jack and Jennifer moved to England, after being offered jobs they couldn’t say no to. Sure they were only there in 2007, which could make Gwen a mere pre-teen, but in Salem, characters are SORASd (rapidly aged) all the time. It’s all about suspension of disbelief, right? But then who is her mother? And what’s her motivation if she’s Jack’s daughter? Maybe she doesn’t know and she’s still being bankrolled by someone else to stir up trouble – or maybe Abby is her half-sister and she’s jealous that Abby got to grow up with Jack? This theory may sound more unlikely but since this is Days of our Lives, we had to include it because we can’t discount any theory!  </p>

Days of our Lives Headwriter...