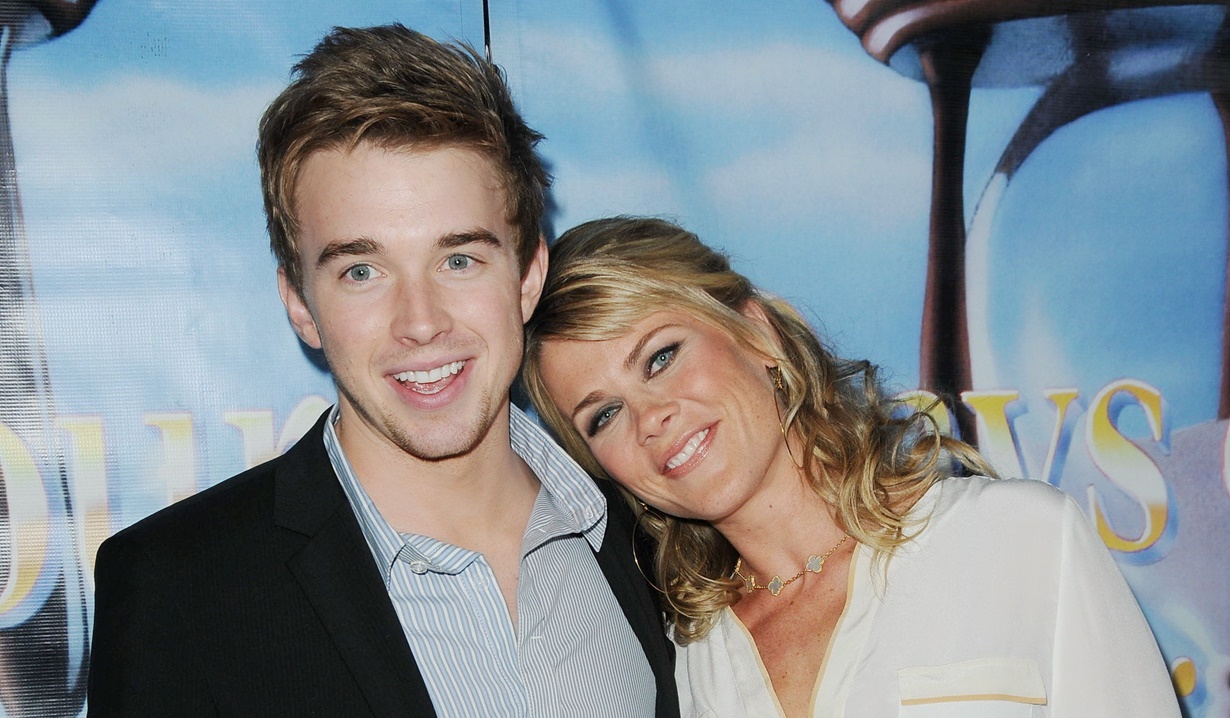 Days of our Lives mama will miss her onscreen son.

Alison Sweeney (Sami Brady) took to her Instagram account to post a couple of photos and bid a fond farewell to co-star Chandler Massey, who plays her onscreen son, Will Horton. Sweeney who is currently in quarantine, spoke about how lucky she has felt to work with Massey over the years and personalized the message by saying, “Chandler, you’re smart, funny, charming and supportive. You bring all that empathy and energy to every scene and I just can’t begin to tell you how much it’s meant to me.” She went on to use emojis to describe the type of scenes they’d shared often shared together and noted, “You were ready to commit to each moment and help make our work the best it can be.” Sweeney concluded the message with a simple statement, “I am so lucky and grateful you took on the role of Will.”

I’ve been so lucky to get to work with @therealcmassey over the years @nbcdays . Chandler, you’re smart, funny, charming and supportive. You bring all that empathy and energy to every scene and I just can’t begin to tell you how much it’s meant to me. Every scene – especially the hard, emotional ones (aren’t they all 😭or 🤬or 🤯? 😂😂) you were ready to commit to each moment and help make our work the best it can be. I am so lucky and grateful you took on the role of Will.

More: Everything to know about Days’ Will & Sonny

Massey also appeared on co-star Freddie Smith’s (Sonny Kiriakis) online talk show with his wife, Alyssa, to mark Will and Sonny’s Days departure. The show kicked off with Smith being jealous of Massey’s apartment before talked turned to some traveling Massey will be doing in his Tesla. The actors then discussed what it was like working together for over 10 years and pivoting out of the industry for a little while. Massey also took some questions, which revealed Massey and Smith didn’t actually experience leaving the show together. See the full interview below.

Check out our amazing Sonny and Will photo gallery, then get your free daily soap opera fix for Days of our Lives, and all other soaps delivered to your email inbox by signing up for Soaps.com’s newsletter.

<p>Will Horton had just graduated from high school when he ran into his cousin Abigail Deveraux on the pier. She introduced him to her cousin Sonny Kiriakis. Will was surprised to learn Sonny was openly gay.</p>

<p>At the time Will met Sonny, he was in a relationship with Gabi Hernandez. However as Will began to question his identity, he made excuses not to sleep with Gabi. Eventually, she broke things off with him. </p>

<p>After Will kissed a gay friend of Sonny’s at a party, Will began to question his sexual identity. Sonny urged him to talk to someone he could trust. He turned to his grandmother Marlena Evans, who let Will subtly know they she’s always known about him. By this time, Sonny had begun to develop feelings for Will but was hesitant to act on them since Will was just coming out.</p>

<p>Will’s old friend from High School, Tad “T” Stevens, was not thrilled about Sonny’s homosexuality. When Will finally admitted to T that he was gay too, T accused Sonny of turning Will gay. In time T learned to be more tolerant and was actually the one who helped Sonny and Will to admit their feelings for one another to each other. </p>

<p>Kate was proud of Will when he came out, though Will’s father Lucas wasn’t as thrilled at first. Lucas also was suspicious that Sonny was using his son. Sonny’s mother Adrienne also felt that Will was not good enough for her son.</p>

<p>Will and Gabi ended up having a one night stand before Will and Sonny were an item. They were both in bad places and they and immediately knew it was wrong. After, Will confessed he was gay to Gabi. However, Gabi became pregnant. She later became involved with Nick Fallon, who offered to marry her and claim to be the father of her child, which both Gabi and Will agreed to. However at Nick and Gabi’s wedding, Chad DiMera had learned Nick wasn’t the father, and Will was outed. Sonny furiously broke up with Will, but they later reconciled. Sonny also helped Gabi deliver the baby on Smith Island, and it brought them closer. She named the girl Arianna after her late sister. </p>

<p>Nick continued to be a problem for Sonny, Will and even Gabi. Nick, who was raped while in prison, began to hate homosexuals. He also discovered that Will had been the one to shoot EJ years earlier at EJ and Sami’s wedding, a crime Lucas admitted to. He blackmailed Will into turning over his parental rights to him, but when Gabi eventually found out, she dumped Nick, who gave Will back his rights to Arianna. Later Nick was desperate to reunite with Gabi and he attempted to rape her by the lake. Gabi grabbed a rock and hit him over the head, and believed she had killed him. Sami and Kate helped Gabi drag his body into the river, and Will and Sonny got involved in the coverup. None of them were aware that Nick survived and would be back to cause more trouble, which landed Gabi in prison for killing him for real a second time.</p>

<p>When an old prison mate of Nick’s attacked Will and Nick, Will was shot saving Nick’s life. Sonny sat by Will’s bedside after he was admitted to the hospital. These two have faced a lot together, both spending time either as a patient in the hospital or there to hold the other’s hand.</p>

<p>Sonny eventually opened up a coffee shop called Common Grounds. Chad DiMera was his business partner and co-owner. He also became Sonny and Will’s best friend. Later they formed another business, a club called TBD, which stood for to be determined because nobody could come up with a name for it. </p>

<p>Guy Wilson took over the role of Will Horton from 2014 until 2015. Sonny finally proposed to Will, who at first was hesitant, but eventually accepted. </p>

<p>A soap couple wouldn’t be a soap couple unless they had at least one shower scene together. Will and Sonny are no exception to the rule.</p>

<p>Will and Sonny were finally married on April 3, 2014 at the Kiriakis mansion. The wedding was officiated by Will’s grandma, Marlena Evans. </p>

<p>Will and Sonny’s happiness had its tests. When Sonny’s ex-boyfriend Paul Narita came to town, Will was jealous at first, but later ended up having an affair with him. Sonny was further distraught after Will admitted to another infidelity while in LA. Sonny decided to take a job at the Titan offices in Paris and ponder their future. Eventually, Will reached out and left a message saying he took full responsibility for what he did, but still loved Sonny and wanted to work things out. An emotional Sonny decided to return to Salem to reconcile with Will, only to learn Ben Weston, The Necktie Killer, had murdered him.</p>

<p>Sonny spent 9 months in Paris following Will’s death. When he returned to Salem he slowly began to move on with his ex Paul Narita. The two eventually planned to marry, but at the wedding an escaped Ben Weston revealed Will was alive. He had been saved by Dr. Rolf’s serum but had no memory of who he was. He was living in Nashville with Susan Banks and believed he was her son, EJ DiMera. </p>

<p>Even when Will was presumed dead, Sonny continued to be a father figure to Arianna. When Will returned he felt immediately drawn to his daughter. </p>

<p>Will was convinced to return to Salem, but still had no memory of who he was. He found no matter how hard he tried, he wasn’t attracted to Sonny. He was however attracted to Paul. Sonny was crushed when he realized Paul too wanted to be with Will. Eventually, Dr. Rolf’s diary was found and Will learned there is a possible serum to help him gain his memory back. Paul was worried, but Will insisted he would not forget loving him. Will had the drug synthesized and took some of it, but only had a fleeting memory. Defying the hospital board, he got more of the serum made, but only a few small memories came back.  </p>

<p>A side effect of Dr. Rolf’s serum to help Will remember was a brain tumor. It affected his personality, and he wasn’t the same person. He even lashed out at his Grandma Marlena, blaming her for pushing him to take the serum and thus his tumor. After surgery to remove the tumor, Will was back to his normal self. </p>

<p>Will and Sonny share a tender kiss. This couple has been iconic since they were the first male gay marriage to air on soap operas after the passing of marriage equality in the United States.</p>

<p>After a tragic accident and a time jump, Will was in prison for a traffic accident that left Sonny’s mother Adrienne dead. He believed his texting and driving caused the accident and spent a year in prison before being exonerated. It was actually Orpheus who caused it, and tried to frame Maggie Horton for the accident. While in prison, Will filed papers to divorce Sonny so he could move on. It didn’t stop him from fantasizing that Sonny visited him at his cell at Statesville and that they reunited. </p>

<p>While Will was in prison, Sonny briefly dated Leo Stark. Sonny had no idea he was a conman, put in place initially by Vivian Alamain and later Kate Roberts, to seduce Sonny and frame him for sexual harassment as the then CEO of Titan. Will and Sonny broke into Diana Colville’s room. Diana was Leo Stark’s mother and they knew she had a secret they could use against their archenemy. </p>

<p>When Leo found out Kate and his lawyer Ted Stark wanted to settle, and he’d not get a huge payout, he attempted to emotionally blackmail Sonny into marriage. Will came to the rescue, learning Leo’s real name was Matthew Cooper and a known prostitute and extortionist. Leo attacked Will, with Sonny running to Will’s rescue. </p>

<p>During their fight, Leo fell and hit his head, leaving Sonny and Will to believe he was dead. Will and Sonny hid Leo’s body after in the trunk of a car, only for his body to go missing. When Leo returned alive to Salem, he began to blackmail them. Sonny was forced to give into Leo’s blackmail and marry him. However, things worked out for Sonny and Will in the end when John  Black, who believed he was Leo’s father at the time, convinced him not to press charges and leave Will and Sonny alone.</p>

<p>Lucas, Sonny, Arianna and Will do each other in face make up. Whether they’re cats or bunnies or dogs, they’re all adorable.</p>

<p>Will and Sonny shared their plans to adopt Will’s sister Allie’s baby with Arianna. She was more interested in getting a puppy. Unfortunately, the plans fell through after Allie learned Will knew their mother Sami pressured Rafe to back out of adopting her child so Sonny and Will could. </p>

<p>Sonny was offered a job heading up a non-profit his brother Alex started dedicated to raising money to help battle breast cancer, a disease their mother Adrienne battled. Sonny couldn’t say no, and he and Will decided to relocate to Arizona. </p>

See Paul Telfer Back at the NBC...

Cyber Monday Deal: 6 Reebok Sneakers Loved By Gigi Hadid Are Currently On Sale For Less Than $100